Ecotourism Rises Along with Hope for a Region’s Future

After enduring generations of the booms and busts of an economy almost entirely dependent on the coal industry, the residents of far southwest Virginia are beginning to take their economic future into their own hands by capitalizing on the mountainous region’s incredible natural beauty to promote ecotourism.

The movement may have begun, oddly enough, with an act of arson.

Built in the 1930s, the High Knob Tower provided spectacular, 360-degree views of five states from the top of a 4,000-foot ridge in Wise County. The High Knob Recreation Area in the Jefferson National Forest not only includes the tower, but also a four-acre lake, a 50-acre campground and plenty of hiking and biking trails. 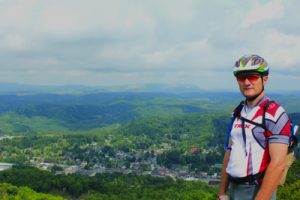 During a ride along a new mountain bike trail, Shayne Fields pauses at an overlook above Norton, Va. An avid mountain biker, he sees the creation of new trails as an investment in the city’s future. Photo by Erin Savage.

The tower, rebuilt in the 1970s, was ingrained in the hearts and history of the region’s residents, according to Steve Brooks, former executive director of The Clinch Coalition and a volunteer distributor for The Appalachian Voice.

“Men share stories about proposing to their wives there,” Brooks says. “Families went there for Sunday picnics. It’s just been a place people go.”

After the tower was burned down seven years ago by arsonists, a coalition came together to rebuild the iconic structure. U.S. Rep. Rick Boucher — who would go on to lose his 2010 re-election bid — helped organize the group, which included environmentalists and conservationists as well as coal and utility industry representatives.

Much of that coalition came together to form the High Knob Enhancement Corporation, which worked to raise the money to rebuild the tower and to promote the enhancement and use of High Knob and surrounding areas.

“It’s the first time I’ve seen such a diverse group of people that worked so closely and so well together,” says Rita McReynolds, a former town council member from St. Paul, Va. “What an effort. Everyone pitched in. School kids donated quarters.”

A ribbon-cutting for the $600,000 project was held on Aug. 22. McReynolds says the energy at the event was exhilarating.

“I was amazed at all the people who were asking, ‘What’s next?’ And that’s the question,” McReynolds says. “What can we do to tie in the tower to other things near it and around it? It’s going to be a catalyst for things to come.”

And other things are coming. Norton is developing a series of trails in and around the city, including nearly 20 miles of mountain bike trails at the Flag Rock Recreational Area, a 1,000-acre parcel of land owned by the city. 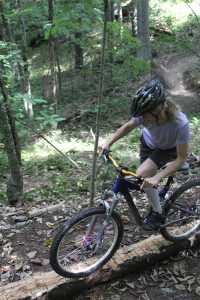 A rider balances her bike on a log feature during her first visit to the new Sugar Maple Trail. Photo by Shayne Fields.

“We’re working with the U.S. Forest Service to build a trail from the Norton reservoir and Flag Rock area to the High Knob Tower,” Mark Caruso, a Norton city council member, said in an email.

“From there, hikers, bikers and equestrians can travel from Dungannon to High Knob to Norton or Big Cherry Reservoir and the Devil’s Bathtub Area,” he says. “The Lost Creek Trail will link the city to the Jefferson National Forest.”

Shayne Fields, a member of the Lonesome Pines Cycling, has been working for the city to design the mountain bike trail system for the Flag Rock Recreation Area.

“I see this as an economic engine for my city,” Fields says. “We’re in the middle of coal country, and we’ve struggled over the years looking for alternatives. We haven’t had much luck with new industries.”

Work on the trails has been boosted in the last year or so by volunteers from local nonprofit organizations Southern Appalachian Mountain Stewards and Mountain Justice, as well as Job Corps volunteers and even people working off community service sentences. The first trail segment, a 1.82-mile-long novice trail, was dedicated earlier this summer.

The Sugar Maple Trail is three-feet wide and not too steep for beginners. More experienced mountain bikers won’t be left out, though. The system will include both intermediate and expert loops when it is completed.

Fields, a longtime mountain biker, also views the project with an artist’s eye. “Designing a trail that will last is all about water management — getting the water down the hill in ways that won’t erode the trail. This results in very organic shapes,” he says.

“This is a giant step forward for this area,” Fields says. “We’re not known for activism or ecotourism. This is one of our first efforts to use the land for something that’s sustainable.”

“Energy resources will no longer be the go-to industry to bail out communities in economic distress,” he commented. “City council understands that with the proper public resources applied to our natural assets, we can become a destination that will provide tourists with a wide range of activities they will be willing to spend money on.”

The region is spectacular. High Knob is home not just to astonishing views but an incredible array of plants and animals, including the exceptionally rare green salamander and Kirtland’s warbler. The Nature Conservancy calls the region the most biodiverse in the continental United States. 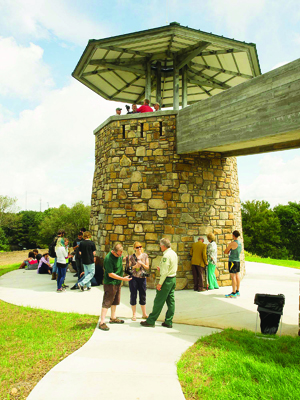 Caruso and his wife Carol have so much faith in what the development of High Knob and other tourist resources can do for the local economy, they opened up Pathfinders Outfitters. The shop caters to people coming to enjoy High Knob, seven nearby mountain lakes, two rivers and the many other outdoor attractions.

Caruso said he and his wife want to promote the area’s assets while working to preserve them for future generations.

“I’m looking forward to the day when we have developed an economic balance in our mountains that is diverse, sustainable, smartly maintained, culturally compatible, and provides job opportunities for all who are willing to work,” Caruso says.

The couple has been encouraged by the level of business so far. They are planning to buy more rental boats, expand their shooting sports programs, and introduce wilderness survival and orientation courses.

According to Rita McReynolds, even smaller St. Paul is witnessing an influx of visitors.

“We’re seeing a lot of buzz with people coming into the area from Kentucky, Tennessee and Alabama,” she says. “A small lodge, Mountain View Lodge, opened up right here in town, which is something I never thought I’d see.”

McReynolds thinks news reports about the reopening of the High Knob Tower will help even more.

“We’re going to see an explosion of more people coming in,” she says. “That news of the tower was huge. We have wonderful mountains, and we’re becoming a destination.”

Steve Brooks, when director of the Clinch Coalition, helped launch the annual High Knob Naturalist Rally, a daylong event with guided hikes and other activities, now in its eighth year. According to Brooks, there is growing recognition from local politicians and the U.S. Forest Service that tourism has more potential than mining or timbering to improve the local economy.

“Politicians want to bring jobs,” he says. “Tourism seems to be the way to do that now. There’s a lot of public support for a more sustainable approach.”

For a region that has seen more than its share of economic turbulence, hope for a better future seems to have risen from the ashes of High Knob Tower.

“Managed responsibly, we can literally have it all here in our mountains,” Caruso added. “We need to be positive about that possibility.”