Kenny Hess, director of sports and safety at Virginia’s Massanutten Resort, watches the weather closely over Thanksgiving weekend. Warm November conditions have made it impossible to make snow for ski slopes. He hopes five nights of projected below-freezing temperatures — a requisite for snowmaking — will let him open lifts to skiers and snowboarders in time for the first weekend in December.

With most visits and related spending occurring Friday through Sunday, “getting an extra weekend or two is huge,” says Hess. That’s because Southeast ski seasons are much shorter than those in the western U.S. For instance, while California’s Mammoth Resort saw 260 ski days in the 2018-2019 season, Massanutten had just 105. And that was a good year.

But economic returns aren’t the only strains snowmaking teams contend with. Visitors have demands of their own — and they don’t take into account the realities of climate change.

“Thirty-five years ago, people showed up in early December and were happy if we had one or two slopes open,” says Hess, who has worked at Massanutten since about 1983. Customers seemed to understand crews were using science to offer the impossible: skiing in a locale that averages 23 inches of snowfall annually. By comparison, Mammoth got more than 700 inches on summits in 2019; Snowshoe, West Virginia, about 180. 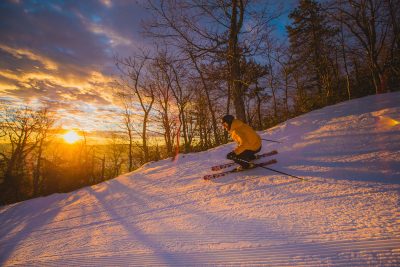 A skier enjoys the sunset panorama during their descent. Photo courtesy of Massanutten Resort

Founder of Responsible Skiing, a sustainability consulting firm for ski areas, Veronica Tonge-Barette says visitor expectations started shifting in the mid-1990s. The proliferation of ski areas in the Southeast and Mid-Atlantic boosted participation in the sport. Increased travel to bigger, snow-rich resorts in the West and Northeast brought demands for more trails and snow. Competing for visitor dollars drove development around snowmaking technology. And Southeastern resorts invested heavily.

“Now it doesn’t matter if it’s been 50 degrees outside for five days straight,” says Hess. “Visitors expect the majority of your trails to be open at all times, and they don’t want to see bare spots.”

All this makes opening slopes sooner — and keeping them open — a high-stakes affair. For most of Massanutten’s 50 years of operation, ski season started around mid-December and ended around March 15. Despite warmer average winter temperatures and fewer cold nights, those dates have expanded in recent years. In 2019, Hess set records with a Nov. 23 launch. Closing day had been pushed to around April 1 before COVID shutdowns.

How are Hess and other Southeast snowmakers extending ski seasons in the face of a changing climate and in light of the fact that ski areas use immense amounts of energy and water? In short, teams of highly trained technicians work around the clock using some of the world’s most advanced snowmaking systems and management techniques.

In the Southeastern U.S., “the resorts that are thriving are the ones that have invested heavily in state-of-the-art technology and protocols,” says Tonge-Barette.

Massanutten is no exception. Hess says the resort has invested more than $10 million in infrastructure and equipment in the past 15 years or so to maximize snowmaking capacity. His team can now blanket a 4,000-foot-long slope with two feet of snow in about 40 hours. Under ideal conditions, the resort’s 70 skiable acres could be covered in less than four days. That’s allowed visitors to access more terrain sooner, for longer and with greater consistency. The results have helped win nods from media outlets like Liftopia, which recently named Massanutten the Southeast’s top overall ski area.

But the success has done more than boost peak attendance days and revenue. Slashing energy consumption by 50 percent or more and seeking to rely solely on recycled water is helping resorts like Massanutten adapt to the looming threat of climate change and become profoundly more sustainable. 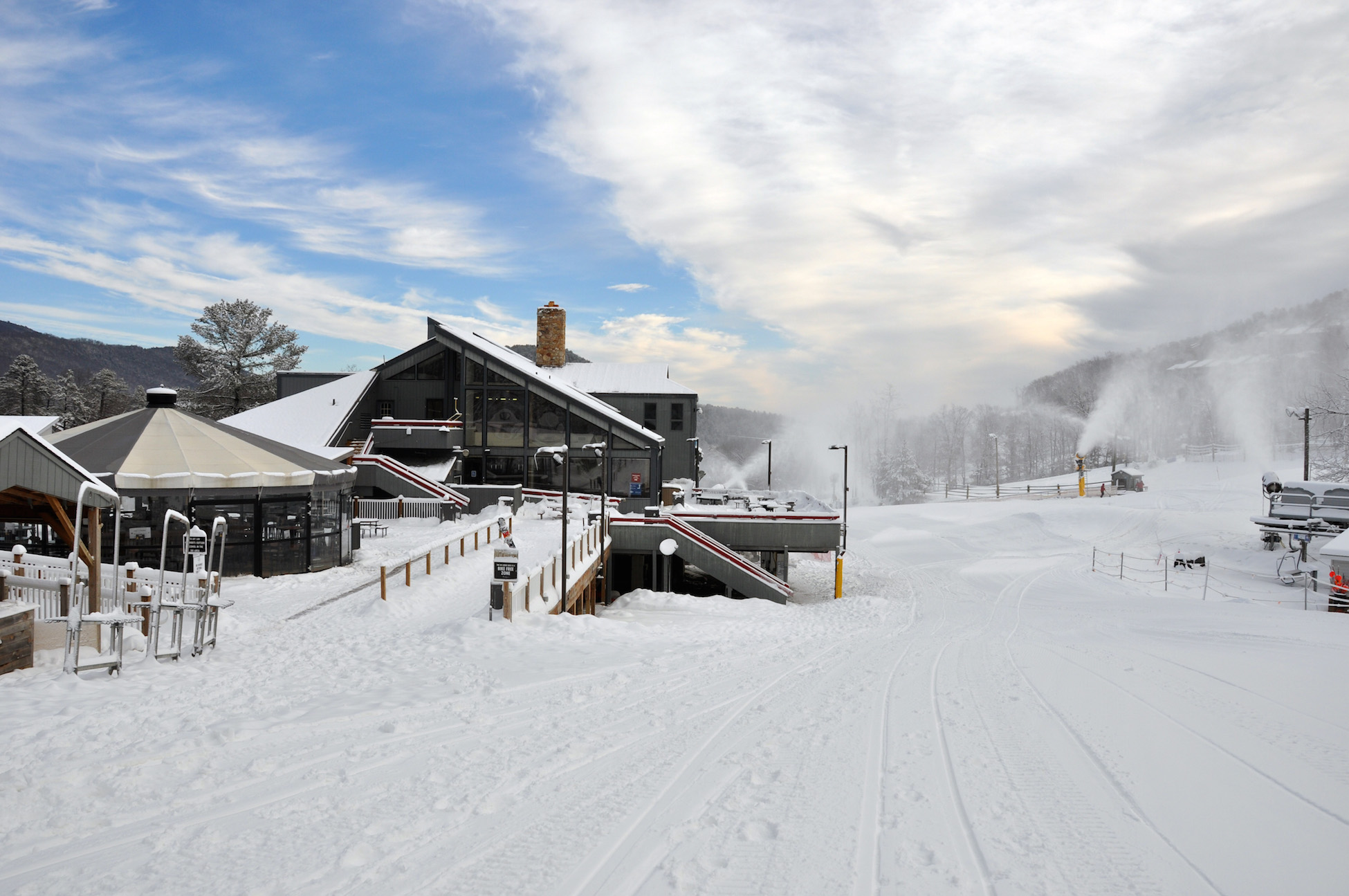 Snowmaking is an essential part of the business for Southeastern winter sports resorts. New equipment has made massive strides in energy efficiency. Photo courtesy of Massanutten Resort

The National Ski Areas Association began pushing members to increase sustainability and lobbying for comprehensive global action to reduce greenhouse gas emissions in 2002. A 2018 report compiled by Protect Our Winters found climate change cost U.S. ski resorts at least $1.07 billion in revenue from 2002 to 2012 alone. Researchers at Oregon State University showed North America’s snowpack has declined by upward of 30 percent in the past 100 years. A study conducted by the University of Virginia Climatology Office found a statistically significant decrease in the number of cold winter nights in the Shenandoah Valley between 1976 and 2011. The list goes on.

What is new, however, is the recognition that meeting consumer demand for more snow has boosted resiliency among ski areas in milder climate zones like the Southeast.

“Twenty years ago, very few resorts would’ve said, ‘Hey, these multimillion-dollar investments we’re making are about fighting global warming,’” says Tonge-Barette. “They were doing what was necessary to attract visitors and survive.”
But as awareness of the climate crisis intensified, snow sports managers like Hess realized the goals were essentially synonymous. Winning the race to increase snowmaking capacity depended on maximizing efficiency. The process inherently led to increased sustainability.

“When I started out, we had maybe 20 to 25 snow guns, and that was it,” says Hess. Snowmaking procedures were “so labor intensive, that’s all we could manage. And the energy costs were astronomical. Compared to today, the system was disturbingly inefficient.”

Guns relied on four massive air compressors powered by diesel engines, which burned about 15 gallons of fuel each per hour. The former were heavy and had to be dragged up the mountain using snowmobiles or ATVs and manually connected to waterlines. Because guns were stationary and hydrants few, teams made huge piles of snow that were then redistributed by bulldozer-like snowplows, also powered by gas-guzzling diesel engines.

Next came the problem of water. Man-made snow requires vast quantities of water — about 200,000 gallons to coat an acre with 12 inches of snow. In the 1980s at Massanutten, it was sourced from a single containment pond in addition to wells and waterways at the base of the mountain. Pumps for the latter ran on diesel engines. Systems to recapture snowmelt were grossly inefficient. And because they allowed water to run off too fast, they increased base layer snowmelt and erosion.

But things have changed dramatically since then.

“In terms of sustainability, as an industry, it’s incredible how far we’ve come,” says National Ski Areas Association spokesperson Adrienne Isaac. “We’re miles ahead of where we were five years ago, and lightyears beyond where we were 20 years ago.”

For instance, Massanutten now has more than 200 snow guns. Most are operated using a single electric-powered air compressor; the rest have onboard units. They use less energy combined than 20 of the early models, and newer guns produce about 40 percent more snow per gallon compared to those that are just five years old. Automation brings further efficiency.
“Each gun has its own climate station,” says Hess. They monitor temperature and humidity, and can be programmed to turn on automatically the moment conditions are right. “What used to take us half-a-night to do manually, we can now do in seconds.”

More guns lead to better distribution of snow and slash the need for plowing. The ability to pivot and shift firing angles allows for greater snow hangtime, which “enables us to make snow in conditions that would have been inhospitable 10 to 15 years ago,” says Hess.

“On that front, I’d say we’re definitely at the head of the pack,” says Hess. “At this point, we’ve developed what is, essentially, a closed system.”

Slopes have been retooled to slow down runoff and minimize snowmelt. That and increased buffer zones of vegetation keep erosion in check. Two more containment ponds were added to capture more than 80 percent of water for reuse. But Hess’s crown jewel is a new system that bolsters capacity by pumping water reclaimed from a treatment plant at the base of the mountain.

“Some years back, we started working with the [Virginia Department of Environmental Quality] to try to make this happen,” says Hess. The system would eliminate the need to drill more wells, pull water from streams or dig more ponds. Though similar methods had been employed by U.S. golf courses for irrigation in arid regions, the application was novel among East Coast ski resorts. It took time to iron out safety protocols and ensure processes would meet environmental regulations. Next came a three-mile-long, multi-million-dollar pipeline.

“The big plus of the system is that it uses enough recycled water to keep from having to interrupt the natural flow of the stream,” Hess says.

“This project took a long time, and a lot of money to achieve,” Hess continues. “But it’s solved our water issues once and for all, and given us the ability to assure guests we’re making snow in a manner that’s environmentally responsible.”

In an industry where customers vote with their dollars, that’s important.

“As a demographic, skiers and snowboarders are very concerned about sustainability,” says Isaac, the National Ski Areas Association spokesperson. “They want to see resorts taking steps to reduce their carbon footprint and protect the environment. If they don’t think that’s happening, they’re going to take their business elsewhere.” 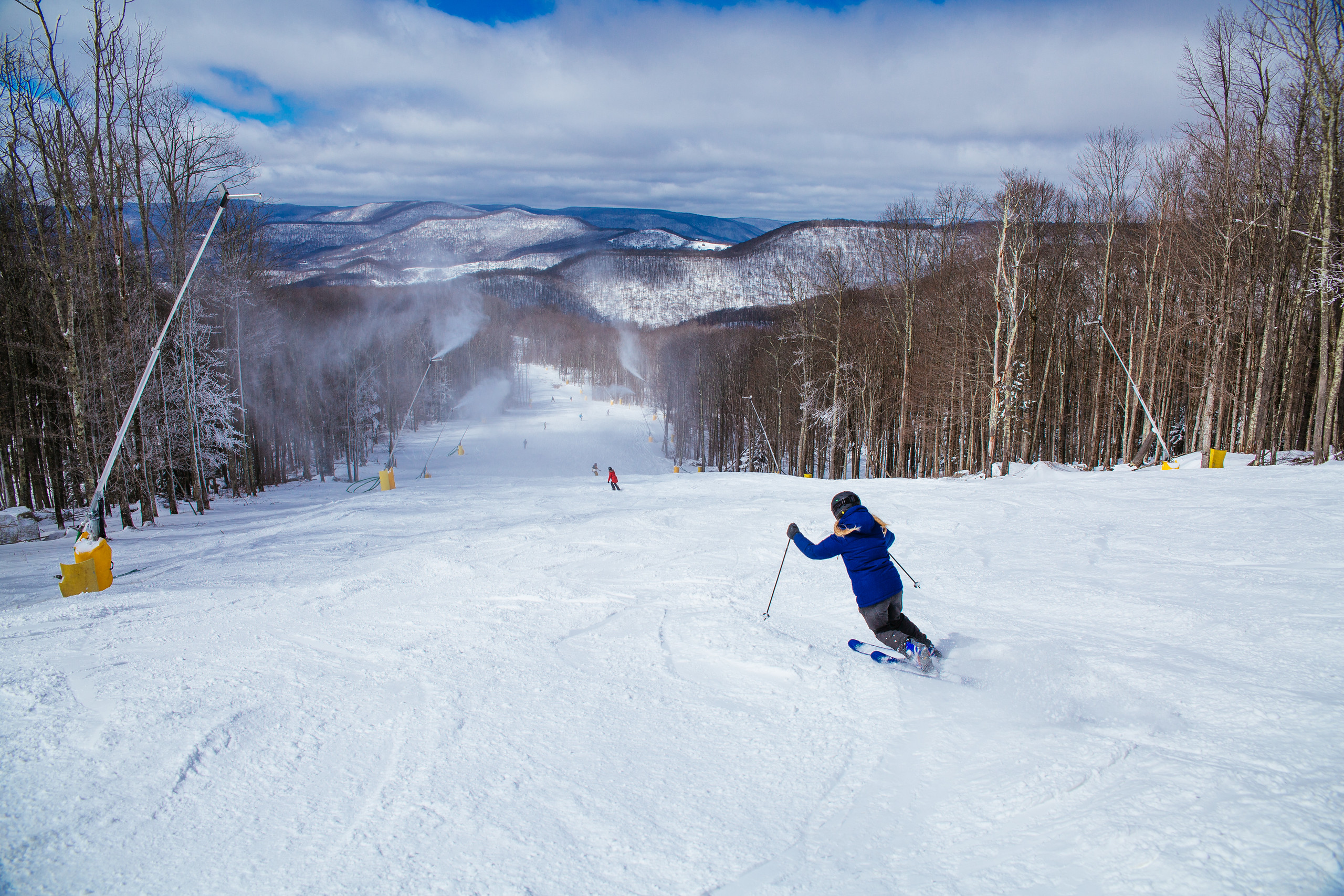 Winter sports enthusiasts cruise down the slope as Snowshoe Resort in West Virginia while Snowshoe’s new, low-energy snowmaking equipment adds to the base. Photo courtesy of Snowshoe Resort

Though Hess and colleagues at other Southeast resorts have managed to dodge the climate change bullet so far, they acknowledge it’s coming.

“In this region, we managed to sort of inadvertently get ahead of the bell curve, then build on that success,” says Hess. In terms of operations, the detrimental effects of climate change have yet to be significant. But he’s quick to cite, for example, an Oregon State University study projecting climate change will cut ski seasons in areas that rely on natural snow by upward of 50 percent by 2050.

Accordingly, the NSAA has joined other ski associations around the globe to increase pressure on world leaders to take drastic action against climate change. But for them to be taken seriously, Isaac says ski areas must set the gold standard for sustainability. 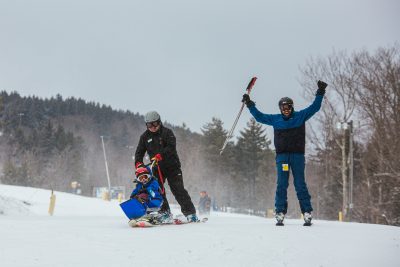 Many are heeding the call. A primary example is Vail Resorts, which owns about 40 ski areas worldwide. Its 34 U.S. resorts currently source about 90 percent of their electricity from renewables. The company has pledged to achieve 100 percent by 2030 and is in the process of investing $25 million in additional energy-saving measures, like enhanced electric public transportation systems for visitors.

Isaac says efforts like these are now standard practice throughout the Southeast and Mid-Atlantic. Resorts that didn’t make them have gone out of business, or been purchased by conglomerates willing to do so. And those that aren’t actively pursuing efficiency and sustainability are likely to soon go out of business.

“At this point, while we don’t know for sure what the future will bring,” says Hess, “we can work hard to prepare ourselves and adapt.”

He, Isaac and Tonge-Barette agree that, for resorts, the process starts with achieving carbon neutrality. They hope the world can unite to slow climate change before it’s too late. If not, at some point, recreational skiing in the Southeast could become a thing of the past.