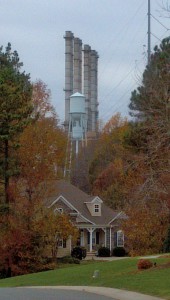 Duke Energy’s Riverbend Steam Plant in Gaston County, N.C., was retired in April 2013; the utility said the plant, which began operating in 1929, was rarely used. Photo by Sandra Diaz

From big newspapers to political blogs, the media is buzzing in anticipation of the U.S. Environmental Protection Agency’s rule aimed to reduce climate-changing carbon dioxide emissions from the nation’s existing power plants, which are expected to be unveiled on Monday. For environmental news junkies like us, this is the equivalent of the Super Bowl pre-game show.

The latest issue of The Appalachian Voice is joining the fray. In this issue, we take a look at how and why the EPA is taking on carbon pollution, and what the much-anticipated rule could mean for Appalachia and the Southeast. The full online edition will be available next week, but if you’re eager to learn more in advance of Monday’s announcement you can read the story Confronting Carbon Pollution here.

President Obama is rumored to be presenting the rules himself on Monday, signaling his strong endorsement of the EPA’s efforts to rein in carbon emissions from existing power plants. And it seems like Americans as a whole are ready to support the move. In a Yale University poll conducted in April, 64 percent of Americans favor setting strict limits on carbon dioxide emissions from existing coal-fired plants, while 35 percent oppose.

The Washington Post explains the expected carbon regulations this way:

The EPA plan resembles proposals made by the Natural Resources Defense Council, which would allow states and companies to employ a variety of ­measures — including new ­renewable-energy and energy-efficiency projects “outside the fence,” or away from the power-plant site — to meet their carbon-reduction target. While the overall target may fall slightly short of what environmentalists have pressed for, the approach is in line with their push to make major cuts in greenhouse gases while seeking to soften the impact on consumer electricity prices.

In some ways, next week’s big announcement is really just the beginning. As we describe in The Appalachian Voice:

The public will have until September to comment on the proposal, and by June 2015 the EPA will finalize its guidelines. States will have until June 30, 2016, to submit their plans for achieving the needed reductions, and the EPA will have until the end of 2016 to review each state’s plan. If all goes according to the administration’s agenda, by the time Obama’s term ends in January 2017 the nation will be on its way to lower carbon emissions — provided the rules withstand the lawsuits that industry groups and coal-friendly states are likely to file.

The carbon rules follow two recent Supreme Court rulings that affirmed the EPA’s authority to regulate harmful pollutants under the Clean Air Act. In an article for Grist, Ben Adler writes that the expected proposal was built for resilience:

The state-based plan was devised to withstand the inevitable political and legal challenges. “We wanted an approach that would pass legal scrutiny, making conservative assumptions about the law, technology, and economics,” says [Natural Resources Defense Council Director of Climate Programs David] Hawkins. “We wanted our model not to be subject to the criticism that ‘You used a harebrained model that only a hippie could love.’”

The formal comment process is just one side of what’s sure to be a hotly contested issue, with a variety of opportunities for public debate. Expect to see strong words from environmental and public health advocates as well as fossil fuel interests, with groups such as Appalachian Voices encouraging states to meet these carbon reduction goals through energy efficiency and renewable sources, and utilities that prefer the status quo preparing to ramp up natural gas production.

We’ll be following the issue closely here on the Front Porch Blog, and in The Appalachian Voice. Read our Confronting Carbon Pollution feature story here, and learn more about carbon and climate change here.