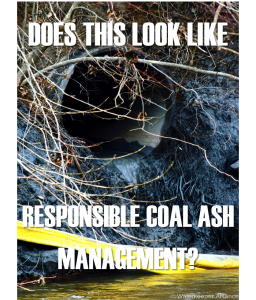 Since the Dan River spill in February, Duke Energy has been under immense public pressure to clean up its toxic coal ash legacy without passing the cost on to their ratepayers.

Rather than actually cleaning up its coal ash, however, the company is spending millions to clean up its image by launching a new greenwashing campaign that claims, “We’ll do the right thing with our coal ash.”

Defining what the “right thing” is remains contentious. While a recent poll showed that 88 percent of North Carolinians feel coal ash should be stored away from water in specially lined landfills, Duke Energy continues to tout “cap-in-place” as an acceptable remedy and has only promised to move its coal ash at a few high-profile locations.

Cap-in-place involves draining the water from coal ash ponds and covering them with dirt and plastic. Duke claims that it is the most cost-effective option, but cap-in-place will not prevent groundwater contamination, coal ash from leaking into waterways, dam failure, or other potential hazards, like the stormwater pipe that collapsed at the retired Dan River plant.

Capping coal ash ponds does not stop the ash from interacting with groundwater, since water seeps through the unlined bottom and sides of the earthen pits, not the top. Additionally, most coal ash ponds in North Carolina were built on top of streams and creeks that drain into larger waterways, as shown by these maps produced by the Southern Environmental Law Center. A bottom liner is the only way to prevent coal ash contaminants from seeping into these buried waterways.

Promoting cap-in-place as a safe and effective coal ash remedy is essentially another public relations stunt aimed at making North Carolinians feel as though Duke is doing “the right thing” when in fact, the company is proposing to literally and figuratively cover up the problem, abandon their ash pits, and allow pollution from coal ash ponds to continue.

While a bottom liner is necessary to protect groundwater from coal ash, moving the ash ponds away from North Carolina’s waterways is the safest way to prevent another catastrophic spill from occurring. There are twenty municipal water intakes located downriver from Duke’s coal ash pits in North Carolina, and more than 1.5 million residents rely on water that is currently threatened by Duke’s aging coal ash dams, most of which are in poor condition.

Duke has only proposed moving ash at its Riverbend, Dan River, Sutton, and Asheville plants, leaving communities near its 10 other coal plants to continue suffering from coal ash pollution. The company argues that the $10 billion dollars and 30 years it would take to move all its coal ash is prohibitive. This begs the question, what is clean drinking water, healthy ecosystems and human life worth to a company that made $2.5 billion in profits last year alone?

Although Duke Energy spokespeople have assured the public for months that the company would be able to clean up the ash that spilled into the Dan river, Duke officials admitted this week that they will never be able to recover all the ash. In fact, they will only be able to remove a small fraction of what was released. So far, the company says that it will remove about 2,500 tons of coal ash deposits — about 6 percent of the 39,000 tons spilled in February.

2 Pings/Trackbacks for "Debunking Duke: Why Captain Abandon is a failed superhero"