Virginians demand an impact statement for the Coalfields Expressway 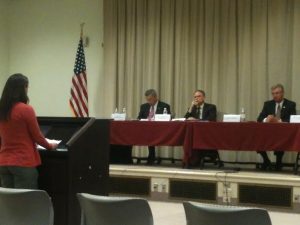 Showing firm opposition mountaintop removal in Virginia in the absence of any assessment of its devastating impacts, Appalachian Voices, our allies and supporters are standing up against the Coalfields Expressway proposal.

Recent hearings have provided a opportunities to reach decision makers, and two upcoming meetings in Lynchburg and Roanoke are still ahead. You can join the chorus demanding a proper environmental study before the Coalfields Expressway, a mountaintop removal project masquerading as a highway, goes any further.

Around Virginia this month, these hearings are being held on the 6-year plan for funding transportation improvements that have risen to the top of Virginia localities’ wish lists. Every district has hosted a public meeting led by a panel of representatives from the Commonwealth Transportation Board (CTB) and each one is a prime space for citizens to voice objections to the proposed Coalfields Expressway.

If the project moves forward in its current form, it will spell disaster for large areas of forests and miles of streams, causing serious harm to the communities that proponents of the project say a road would benefit. Click here to learn more about the proposal.

The detrimental effects of proposed mountaintop removal mines along the Coalfields Expressway’s re-aligned route have not been studied in an environmental impact assessment — and the fundamental disconnect between those harms and the notion that the project is meant to stimulate local economies and boost activity in rural Southwest Virginia poses big problems.

It is critical that leaders like Transportation Secretary Aubrey Layne, who is chairing the series of public CTB meetings, recognize the broad disapproval of the project from across the commonwealth and hear why people feel that a supplement environmental impact statement is needed to account for the dangers to local natural resources and residents in proximity to it.

Regional members of the CTB need to hear from you. Send in an electronic comment now, and sign up to speak at the Roanoke hearing (5/19 at 6 pm) in person, as we keep upping the volume calling for leaders in the administration to stop the Coalfields Expressway moving forward, its impacts almost entirely unassessed and its environmental costs largely unknown.