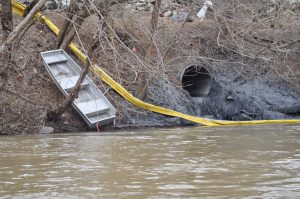 A month after the Dan River coal ash spill, questions remain unanswered and public pressure on Duke Energy and the state continues to grow.

It has been a month since Duke Energy and state officials plugged the failed stormwater pipe at Duke Energy’s Dan River Steam Station that spilled between 30,000 and 50,000 tons of toxic coal ash and millions of gallons of contaminated water into the Dan River over six days.

Regardless of the political environment in North Carolina, and the state legislature’s recent treatment of environmental rules, the Dan River spill was a major event and a reminder of the dangers of coal ash and poor enforcement. But with the anti-regulatory renown of North Carolina’s lawmakers and state agencies, it has understandably created a firestorm in Raleigh and around the state of people demanding action that many believe is long overdue.

As much as the N.C. Department of Environment and Natural Resources and Governor Pat McCrory would like to wash their hands of this preventable spill, it continues to dominate state politics, and prominent coverage in national news outlets. And the aftermath of the spill is still unfolding.

Yesterday, a Wake County Judge ruled that Duke Energy must immediately take action to prevent further groundwater pollution at its 14 coal-fired power plants in North Carolina. The ruling negates previous claims by DENR that it lacks the legal authority to require cleanup of ash ponds around the state.

Duke spokesperson Erin Culbert said that the company is “considering this ruling as we take another look at our management of coal ash basins.” Duke officials have not said whether the company will appeal the decision.

The day before the ruling, DENR officials stated that failure-prone corrugated metal pipes similar to the one that ruptured under the coal ash pond along the Dan River are in use at eight other Duke plants in North Carolina, including the Belews Creek plant in Stokes County, where Appalachian Voices has worked to help community members speak out against coal ash pollution. 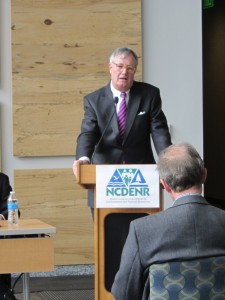 DENR Secretary John Skvarla speaks to reporters about the agency’s response to the Dan River spill.

Duke Energy and state regulators previously claimed the Dan River coal ash site was the only place the metal pipes had been used.

Unsurprisingly, the ecological impacts of the spill are beginning to rise to the surface. Local news outlets began reporting this week on the appearance of dead clams and mussels that are dotting the Dan River Bank for at least 20 miles downstream from the spill site. The news comes a few weeks after Tom Reeder, director of the N.C. Division of Water Resources coldly claimed “If you’re a mollusk and covered with ash then, yeah, you’re gonna die.”

Other sources have highlighted activism and public backlash in Raleigh and Charlotte, where Duke Energy is headquartered. On Feb. 25, citizens gathered at Duke’s headquarters to deliver a petition signed by more than 9,000 demanding the company take full financial responsibility for its spill and agree to move the rest of its coal ash to safer lined storage facilities away from rivers and lakes.

Then, last Wednesday — especially symbolic, as Christians around the world observed Ash Wednesday — Progress NC with partner organizations, including Appalachian Voices and the North Carolina NAACP, held a protest and press conference across from Gov. McCrory’s home to call on the governor to force Duke Energy to clean up its coal ash. There, the Rev. William Barber announced the NAACP will open a federal civil rights investigation into whether Duke intentionally placed toxic waste dumps in predominantly minority communities.

Major news outlets including The New York Times and Al Jazeera America have done their own investigating, digging up dirt on how DENR’s regulatory power was crippled by anti-environmental legislation and executive directives, and how the public’s trust eroded more with each new revelation that has come after the spill.