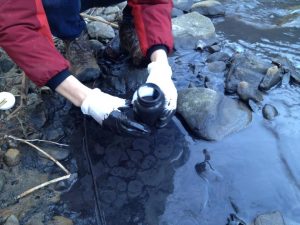 Field Update from Erin, 10 a.m., February 12, 2014
We tested Fields Creek where the slurry spill entered the creek and upstream for electrical conductivity, which indicates the level of charged particles like salts, heavy metals and other pollutants associated with coal. The conductivity upstream was 391 μS/cm (microsiemens per centimeter) while the value below the spill was 1016 μS/cm. For reference, Central Appalachian streams should measure roughly between 300 and 500 μS/cm.

There is clearly a high level of pollutants from the spill in the immediate vicinity of the spill. Test results here.

So how are West Virginia officials responding to the spill? Check out this video that my colleague Matt Wasson put together:

Field Update from Erin, 11 p.m., February 11, 2014
Several staff responded to the spill this afternoon to collect samples and documentation. We were able to collect samples at the entrance of the coal prep plant, which is 1/4 to 3/4 of a mile downstream of the broken pipe causing the spill. We also collected samples at the end of the Fields Creek, just before it reaches the Kanawha River. We plan to analyze samples for heavy metals, total suspended solids, and organic compounds and will make those results available as soon as possible.

The water in the creek was extremely turbid and was a dark grey, almost black color. Significant sediment had already built up on the banks. We also noticed the same sweet smell we encountered during the crude MCHM spill. There have been several different reports regarding what coal processing chemicals might be in the slurry. Secretary Randy Huffman of the state Department of Environmental Protection said that the plant had used MCHM in the past, but had switched to polyethylene glycol or polypropylene glycol. We hope that as this situation continues to develop, accurate facts are released more quickly than in the recent crude MCHM/PHP spill.

Update 7:03 p.m., February 11, 2014
Current reports put the spill at 108,000 gallons of slurry, affecting 6 miles of Fields Creek and, despite plant workers’ efforts to stem the spill, discharging some slurry into the Kanawha River. The West Virginia Department of Environmental Protection has acknowledged the gravity of the incident, with acting director of the Division of Mining and Reclamation, Harold Ward, stating in Ken Ward’s latest update, “There has been a significant environmental impact.”

A previous incident apparently occurred at the same plant in November 2013, with the plant “discharging black water into south hollow stream and leading to a discoloration of Field’s creek.”

Our folks on the scene worked until nearly dark to gather samples and document the incident; more info to come as news filters in. 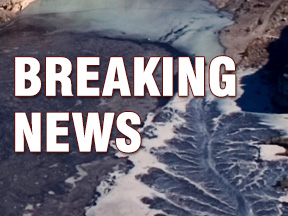 According to several news reports, a coal slurry spill of “significant” size has taken place in Kanawha County, W.Va. As reported by Ken Ward, Jr., in The Charleston Gazette, the spill of slurry — a toxic byproduct of washing toxins off of coal after mining — happened between midnight and 5:30 a.m. this morning when a pipe ruptured between a processing plant on Fields Creek and an impoundment where the slurry is stored. According to a spokesperson for the West Virginia Department of Environmental Protection, there are no drinking water intakes “in the immediate vicinity of the spill.”

Members of the Appalachian Voices Water Watch team are in West Virginia and heading to the scene now — stay tuned for updates and an on-site report as we learn more about this developing story. 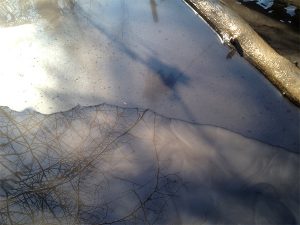 The handling of slurry in the coal-mining regions of Appalachia has a long and contentious history that was revealed to the world by the Buffalo Creek disaster in 1972 that killed 125 West Virginians and left more than 4,000 homeless. Beyond the threat of massive surface impoundment failures, slurry injected in abandoned underground mines has permanently poisoned the wells of thousands in Appalachia. Check out our story in the August/September 2012 issue of The Appalachian Voice, “Buried Blackwater: Revealing Coal’s Dirty Secret” to learn more.