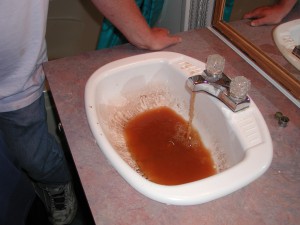 For decades, coal slurry was unregulated and little was known about where it was being dumped. In two major lawsuits, West Virginians demanded the coal companies be held accountable for years of community-wide contamination and disease likely caused by slurry poisoning their wells. Photo by Vivian Stockman, ohvec.org

No one knows exactly when the industry began injecting coal slurry, the toxic, semi-solid waste that remains after mined coal is washed, into networks of abandoned mine shafts throughout Appalachia.

But it was sometime after a disaster on a cold morning in 1972, when 132 million gallons of blackwater erupted from a poorly constructed dam and washed away communities along Buffalo Creek, that the disposal of slurry largely went underground.

The coal industry may have thought they found a safe alternative to the slurry ponds they hid in the hills like the one that failed on Buffalo Creek. But a secret this dirty never stays buried.

“Over long periods of time, we’re talking about billions of gallons.” says Mat Louis-Rosenberg of the West Virginia-based Sludge Safety Project, a watchdog group for communities near coal slurry disposal sites. “We’re talking about oceans of this stuff underground.”

Today there is mounting evidence that injecting coal slurry underground has poisoned groundwater, caused community-wide contamination and shortened the lives of residents young and old who simply wanted to drink their water or bathe.

Creating A Case Against Slurry

In the past decade, the growing concern surrounding slurry has led to increased interest in the scientific and medical communities. Residents were confident the opaque, gray and brown water that they collected from their wells was contaminated by slurry, but they would need to prove it in order to stand up to the coal companies.

In 2004, Dr. Ben Stout, a stream ecologist and professor of biology at Wheeling Jesuit University, met with residents in Mingo County who complained of health problems, including miscarriages and birth defects, kidney and liver failure, cancer, intestinal lesions and nervous system disorders, among others. He agreed to study their well water quality and when he arrived, one thing was already on everyone’s mind.

“Their number one question in eight different communities in southern West Virginia was, ‘What is in coal slurry?’” Stout says.

Testing water samples from fifteen wells within two miles of the Sprouse Creek Slurry Impoundment near Williamson, W.Va., Stout found instances of contaminants such as lead and arsenic that exceed drinking water standards.

In his report, Stout wrote that the water quality in the area was “unquestionably poor” and that it may present a “chronic health hazard to families exposed to wells.” Stout concluded that the water was unsafe for drinking or bathing in and could be harmful whether ingested or inhaled as steam, pointing out that hot water heaters concentrate heavy metals in water before it reaches the sink or shower.

Coal-related activities likely contributed to the pollution, the report found, but additional studies would be required to determine the exact sources of the contamination. What Stout really needed, he says, was a slurry sample from site of the slurry injection.

Stout visited the site with the permission of Massey Energy, the owner of the prep plant that pumped 1.4 billion gallons of slurry into the ground over nearly a decade. At the last minute, Massey denied him access to collect slurry for testing. Nearly 700 impacted residents of Mingo County sued the notorious coal company, who denied culpability. Seven years later, on July 27, 2011, Massey settled with the residents for $35 million.

“Now, that doesn’t admit guilt but it sure raises a red flag that something went wrong there,” says Stout.

The simple fact, Stout says, is that “there are surface impoundments and underground injections into old coal mines and around aquifers, and a lot of those aquifers are where people get their drinking water.”

The settlement between Mingo County residents and Massey’s Rawl Sales & Processing subsidiary became one of the most publicized of its kind. Some, such as Erkan Esmer, a one-time consultant for Massey, believe the chances of contamination could have been minimized, had the company constructed an impoundment instead of opting for underground injection. But as Esmer said in recently publicized testimony from the pretrial investigation, “Don [Blankenship, then-CEO of Massey Energy] thought that $55,000 was too much to spend.”

Rosenberg and the Sludge Safety Project know these are not new problems, and that they won’t be easy to fix. But after another high-profile settlement in June 2012 related to water contamination from slurry injection in neighboring Prenter, W.Va., this time against Patriot Coal Corp., the group, and residents, are hopeful.

There are many parallels between the Prenter and Rawl cases. They took place just two counties apart. Both communities watched their water quality decline until a brackish, foul-smelling liquid fell from their faucets and stained and corroded bathtubs and sinks. Both watched as their community’s health rapidly declined. And in both cases, the coal companies settled at the last minute, just days before opening arguments.

“That is what’s common in most of these court cases,” Rosenberg says. “Even when you win, you don’t win. You settle. The coal companies don’t want the public spectacle of a trial.”

Before 1999 in West Virginia, Rosenberg says, there were no meaningful regulations governing slurry injection, meaning that coal companies indiscriminately injected slurry underground with little to no oversight for more than 30 years.

In 2009, after Sludge Safety Project worked to organize citizen efforts, the group won a moratorium — self-imposed by the West Virginia Department of Environmental Protection — on new underground injection permits being issued in West Virginia.

“We’ve made major strides but we’re still trying to get the last of them shut down,” says Rosenberg. “The moratorium could be lifted at any time.”

Sludge Safety Project came close last year to achieving their primary goal: an outright ban on slurry injection. But as the group worked to gain support in the legislature for the ban, the West Virginia Coal Association was lobbying for the DEP’s moratorium to be lifted. Neither accomplished their goal, but the difficulty in obtaining a permit to build a surface impoundment and the inability to inject underground has the industry backed into a corner.

After years of pressure from West Virginians, companies operating coal prep plants are making the switch to alternative technology that Sludge Safety Project and many others have supported for years. In the past two years, three plants have switched to using dry-filter presses, a closed-loop system that eliminates the creation of slurry and the need to dispose of it. In the stain that slurry has left on water and West Virginia, Rosenberg sees an encouraging story.

“Unlike the general downturn of coal, the things that are blocking injection and impoundment permits really come from years [of] aggressive advocacy, not just because of market conditions,” he says.

In the heart of Appalachia, the shift away from coal slurry continues. But the resource the residents sought to protect is lost.

“There is no truly good solution to a poisoned aquifer,” says Rosenberg. “That’s a resources that’s been taken away from people forever that can never be fixed. There’s no true justice for something like that.”