For Patriot Coal, Ending Mountaintop Removal is a “Win-Win” 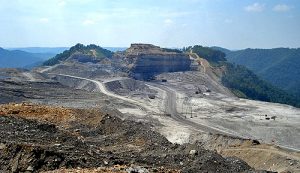 Having recently emerged from bankruptcy, Patriot Coal CEO Ben Hatfield said the 2012 settlement that forced the company to begin phasing out its mountaintop removal operations proved to be a “win-win.”

A little more than a year ago, amid its bankruptcy proceedings and multiple lawsuits, Patriot Coal announced it would phase out its use of mountaintop removal coal mining in Appalachia as part of a settlement with environmental groups over selenium pollution.

Taken at face value, statements made at that time by Patriot’s CEO Bennett Hatfield held promise that the movement against mountaintop removal, focused on exposing the poor economics as well as the irreversible environmental impacts of the destructive practice, had reached a pivotal turning point.

Hatfield told the court that Patriot recognizes that its mining operations “impact the communities in which we operate in significant ways,” and that ending mountaintop removal will reduce the company’s environmental footprint. But the position the company took on phasing out mountaintop removal was largely strategic and focused on the financial benefits of reducing the company’s risks as it worked through bankruptcy.

Now, having recently emerged from its reorganization as a privately held company, Patriot’s ownership is optimistic about the company’s future. And a few timely pieces last week by SNL Energy Reporter Taylor Kuykendall provide some insight into Hatfield’s earlier statements on the benefits of moving away from mountaintop removal, and why the settlement proved to be a “win-win.”

According to SNL Energy, Hatfield predicts 2014 will be a difficult year for the entire coal industry and will be particularly rough for companies operating in Central Appalachia, where more mine curtailments and production cuts are expected. But Hatfield claims that a “leaner” Patriot can serve as a lesson to other companies struggling through coal’s continuing downturn.

“I believe, in some respects, we’re advantaged by being forced to incorporate dramatic cost improvement and make operational changes that have made us a much stronger company,” Hatfield told SNL Energy. In other words, Patriot’s Central Appalachian counterparts have not realized the benefits of the more nimble business model that Patriot has adopted.

Part of those forced, dramatic cost improvements is the company’s gradual move away from mountaintop removal. In a subsequent piece by Kuykendall, Hatfield claims that Patriot had planned to end its surface mining operations regardless of the 2012 settlement because of “regulatory resistance” and the volatility related to permit approvals, and that the company was finding it “increasingly undesirable to deploy mountaintop removal operations anyway.”

That could be seen as face-saving behavior, or lingering bitterness over a historic win for opponents of mountaintop removal. But Patriot was on the hook for more than $400 million in fines to clean up selenium pollution at several of its surface mines, so it makes sense that mountaintop removal can quickly become anathema to sound business practices, investor confidence and the very viability of a company — that is, when mining companies are held accountable for the true costs mountaintop removal imposes on the environment and nearby communities.

Last month, the U.S. Environmental Protection Agency wrongly approved weakened selenium standards in Kentucky that raise the amount of selenium allowed in state waterways. These new standards will be difficult, if not impossible, to enforce at mountaintop removal coal mining sites. Of course that doesn’t mean those costs — or maybe “damages” is a better word — go away. Instead, that liability is passed to citizens, and under-resourced regulatory agencies and local governments. Appalachian Voices and our partners promptly sued the EPA after it approved the new standards.

Regardless of industry efforts to find an escape route and evade the costs of its pollution, Hatfield told SNL Energy that, given the regulatory risk and strong likelihood of new permits being met with litigation by environmental groups, it is “increasingly unlikely that any producer is going to invest a lot of money in building out a large-scale surface mine in Central Appalachia.”

In other words, although Patriot was the first company to announce its plans to end mountaintop removal operations in Appalachia, it won’t be the last.