When Diane Pitcock and her family retired to rural Doddridge County, W.Va., in 2005, she planned on canning garden vegetables, watching the stars and listening to the owls. Today, however, four Marcellus Shale gas rigs surround her land, and the ridge behind her home hosts an access road instead of a forest. On nights when the noise from a nearby rig keeps her awake, the light from the well pad is bright enough that she can step onto her bedroom porch and read a book. 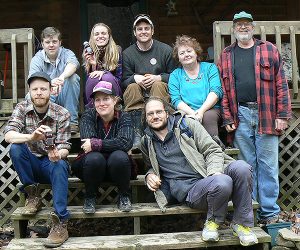 John and Diane Pitcock (back right) and their youngest son Josh (back left) visit with participants in a Mountain Justice Spring Break activist program. Photo courtesy of Diane Pitcock

Before settling in Doddridge County, the Pitcocks researched conventional gas drilling and decided they were comfortable with the practice — their new land came with a standard vertical gas well. Yet, after they moved, information began surfacing about the new hydraulic fracturing and horizontal drilling methods used to unlock natural gas from the Marcellus Shale, and the Pitcocks grew concerned.

When they learned that their immediate neighbor had leased much of his land for horizontal gas drilling, Diane Pitcock responded by forming West Virginia Host Farms, a grassroots network of concerned landowners who provide journalists and scientists with access to their land in order to further research and media coverage of Marcellus Shale fracking.

“[We] invite researchers, journalists, environmental groups, students, anybody interested in the impacts of shale gas drilling on the environment, and on the health and safety of people, and land rights issues,” she says.

Pitcock hopes their efforts will provide decision-makers and the public with information about Marcellus Shale drilling that will lead to stronger regulations and better oversight of an industry that she says is out of control. “It’s in my opinion too destructive, too unknown, and I am seeing it firsthand because I’m at ground zero.”

A self-described pro-business conservative, Pitcock believes environmental protection should not be a political issue. “You can be pro-hunting or anti, or pro- or anti-gun, but you’ve still got to drink water and you still need clean water and clean air to breathe,” she says.