Tenn. Tuesday – Compromise is Not a Condition 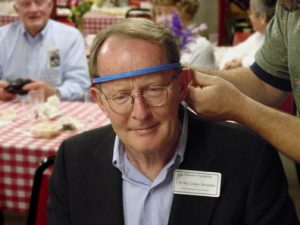 The Tea Party measures Senator Lamar Alexander’s congressional competence. Or is he being fitted for a hat?

We’ll kick off this Tennessee Tuesday post with what seemed like a small story in the big world of Tennessee politics. Last week, the New York Times editorial page blog offered some extra thoughts on a Tea Party letter to Tenn. Senator Lamar Alexander, in which the Tea Party compelled Alexander to retire from office because “our great nation can no longer afford compromise and bipartisanship, two traits for which you have become famous.”

Here’s what the NYT had to say in response:

“The idea that evidence of “compromise and bipartisanship” should ever be rated a shortcoming in a politician is remarkable. It’s a corollary of Ronald Reagan’s grand dictum that “Government is not the solution to our problem; government is the problem.” Mr. Alexander played a major role this year in several Senate compromises, notably helping to break the impasse over student loan rates and supporting the Senate’s immigration reform measure. If nothing else, the Tea Party letter is a worthy trophy for him from the Republicans’ intramural war.”

Admirably, Sen. Alexander wasted no time in responding in a public way. He penned an op-ed that was published in today’s Tennessean, which begins with a nod to his Tea Party antagonists as “well-meaning Tennesseans.”

“Last week, some well-meaning Tennesseans wrote a letter suggesting that I “retire with dignity” from the United States Senate because of a record of “compromise and bipartisanship, two traits for which you have become famous … I’ve listened carefully to the 6 million Tennesseans I’m elected to represent. So the letter deserves respect and this response: I appreciate the suggestion, but if the people of Tennessee will allow it, I’d rather continue to serve — hopefully, with dignity … Washington needs more, not fewer, conservatives who know how to govern. Governing means listening, standing up for what you believe in and solving problems to get a result. I did that as governor. I’m doing that as senator. I’m proud of that record.”

Also today, The Washington Post reports that come 2014 Alexander will indeed face a primary challenger from the right. Tennessee State Representative Joe Carr announced on a local radio show this morning that he will run for Alexander’s seat. According to the WashPo, Alexander’s seat in the general election is not considered vulnerable.

From the senior to the junior, Tennessee Senator Bob Corker has recently found himself in a similar position, facing down the hyper-partisanship that has become prosaic in our politics.

Perhaps he’s taken to Alexander’s, sad to say, old-school but not outdated vision for governing, but Corker is in a much less precarious situation than his fellow senator. USA Today ran an insightful piece on Corker yesterday framed around a heated exchange where he had to, you guessed it, defend his conservative credentials. The paper calls him “one of the few people in a deeply partisan Washington who can afford to bargain without seeming to compromise his political future.”

Corker is quoted in USA Today story as saying: “… you know, people have to step into a little bit of a vacuum that’s created and help move things along. I cherish the opportunity to do that.”

This week, we have been reminded that Tennessee has two Senators that understand the value of compromise, something that is lost on many others in Congress.

I would say I’m too young to remember when compromise suddenly became a condition. But I’m not. And it seems that the 2014 political playoffs — especially with contests in Kentucky (Sen. McConnell), West Virginia (Sen. Rockefeller), Tennessee (Sen. Alexander) and North Carolina (Sen. Hagan) – will look much the same. But constituents and candidates alike should start with the acceptance that the question of who can govern better will never be synonymous with asking who can govern less. For now, I propose a slow clap for the senators from the Volunteer State. As far as I’m concerned, in a democracy compromise will never be a condition.

While we’re on the subject, sort of, I highly recommend the Nashville City Paper’s final editorial, and auto-obituary, on why Nashville and the rest of America needs newspapers. It’s a beautiful and elegiac final bow for a paper going through what many dailies, weeklies and periodicals are experiencing across the country.

Thanks for reading. Stay tuned for more Tennessee Tuesdays in the coming weeks. In the meantime, we recommend checking out the most recent post on the TNergyBlog, “Appalachia, Save Thyself.” A snapshot of Appalachia’s poverty and climbing electricity rates, it’s comes with a compelling call for energy efficiency in coal country and throughout our region including a mention of Appalachian Voices’ Energy Savings for Appalachia program.