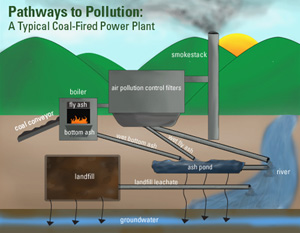 A story this week describes how the Office of Management and Budget caved to industry pressure and weakened an EPA proposal to update a 30-year-old rule on power plant wastewater discharges.

We’ve written before on the Front Porch Blog about the need to dramatically strengthen federal limits for wastewater discharges from the nation’s power plants, which account for roughly two-thirds of all toxics that wind up in America’s rivers, streams and other waters. In June, the Environmental Protection Agency, finally, issued a proposal to update the 30-year-old discharge rule.

While not perfect, the proposed “effluent limit guidelines,” or ELG rule, would go a long way to reducing the discharge of toxics, including mercury, selenium, arsenic and lead, to name just a few. The EPA included several different options for electric utilities to achieve the pollution reductions.

Before the proposed rule was released, it went to the White House Office of Management and Budget for review, as all rules do. However, according to a story this week in Bloomberg/ BNA, OMB officials had previously met with industry representatives who apparently pressed for more options that are … wait for it … less stringent. Which they got.
The added options include higher limits for some toxics, and exclude from regulation certain kinds of waste and certain power plants depending on size.

As Eric Schaeffer, director of the Environmental Integrity Project, points out, a key difference between the EPA and OMB is that the former must, by law, conduct its business in a publicly transparent manner, while the latter does not. “Anything EPA does takes place in a fishbowl — the agency must defend its decisions on technical, economic, and legal grounds …” he told Bloomberg/BNA. “OMB doesn’t operate with that level of accountability, so it’s unsettling to see their extensive markup of a proposal it will never have to explain or defend.” (EIP issued this comprehensive report last month that delves deeper into the ELG rule.)

Here’s where you come in. EPA has set September 20 as the deadline for public comment on the rule. Take a minute today to let the agency know that you want the strongest possible protections for the water you drink, the river you fish in, and the lake where you swim. Americans expect — and deserve — nothing less.