N.C. State Rep. Harrison: Let the EPA Do Its Job 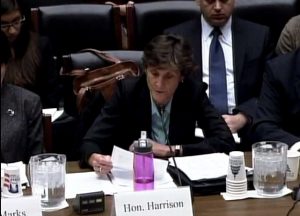 What should the role of the states be in protecting human health and the environment?

Last Friday, the U.S. House Energy and Commerce Subcommittee on Environment and Economy held a hearing to untangle that complex question. North Carolina Rep. Pricey Harrison testified to the committee on the need for increased oversight and regulatory enforcement by the U.S. Environmental Protection Agency.

“The question is not whether states or the federal government have a role in environmental protection,” she told subcommittee members, “but whether each is playing its appropriate role under current law.”

Harrison highlighted the growing concerns of North Carolinians’ surrounding coal ash pollution from disposal ponds owned by Duke Energy as an example of how states are failing to protect citizens. The state began requiring more extensive groundwater monitoring a few years ago. But even now, with known instances of groundwater standards violations, no action has been taken by the state to get Duke Energy to address the contamination.

Another emerging issue is the reckless push to bring hydraulic fracturing to the state. State Senate Bill 76 would allow fracking in the state in two years, no matter the status of the state’s regulatory development, resources or staffing. This diagram lays out the N.C. rule-making process before the Regulatory Reform Act of 2011, a far-reaching law that weakened protections and complicated the creation of new state regulations. Photo from ncpolicywatch.org

Then there is S781, the Regulatory Reform Act that that was passed by the North Carolina General Assembly in 2011. Called a “polluter’s wish list” by opponents, the law severely limits what rules state agencies can create and prohibits any rule to be stronger than federal standards. Federal rules, however, are designed to be baseline standards, not the maximum protection.

“While federal attempts to establish minimum safety standards and ensure effective enforcement by state agencies can be inconvenient for specific industries at times,” said Rep. Harrison, “members of Congress would serve their constituents best by allowing agencies like the EPA to do their job and providing them the resources they need to do it effectively.”

In a tense moment of questioning that one would expect in a courtroom more than an amicable committee hearing, West Virginia Congressman David McKinley grilled Harrison on the specifics of H.R. 2273, federal legislation he introduced to leave the regulation of coal ash up to the states. The bill has been touted as setting up a state-run program for the the disposal of coal ash (called coal combustion residuals, or CCR), but according to a Congressional Research Services report:

At the hearing, Rep. McKinley continually referred to obsolete reports that the EPA published in 1993 and 2000 that say coal ash is not a hazardous waste. He conveniently sidestepped the fact that the science has changed and that the EPA’s newest findings on coal ash published in their 2010 proposed rule show that coal ash is indeed hazardous when disposed. A diagram laying out N.C. rulemaking after the Regulatory Reform Act. Photo from ncpolicywatch.org

McKinley also repeatedly claimed that the EPA would have authority over states under his plan — the Congressional Research Services report found otherwise:

Regardless of whether a state chose to adopt a CCR permit program, EPA would have no authority to compel states to adopt and implement the program according to provisions in the proposed amendments to RCRA.

While some states may be models of how to manage and run environmental programs, federal statutes are designed to make sure citizens of all 50 states have effective baseline protections. Cutting EPA’s role in this, as McKinley’s ill-conceived bill would, is a radical departure from more than 40 years of the structuring of fundamental laws like the Clean Water Act and Clean Air Act. Or, as the Congressional Research Services report puts it:

By creating such a program entirely within the proposed statute, Congress would create a permit program unique among environmental laws.

North Carolina is not the only state where agencies have fallen far short of providing essential environmental protections. Kentucky, for example, has been the site of egregious violations of the Clean Water Act. Appalachian Voices’ Programs Director Matt Wasson wrote on Grist in summer 2011:

The failures of states like North Carolina and Kentucky to enforce environmental regulations under current law have not gone unnoticed by the public. Last week, more than 1000 people marched on the state capitol for the annual I Love Mountains Day rally in Frankfort, Ky. They demanded a move away from destructive coal industry practices and toward safer and cleaner energy via “New Power” — new energy, economic and political power.

As long as states choose to ignore the importance of protecting environmental and public health with strong regulations and enforcement, citizens will demand “New Power” and federal agencies like the EPA to step in where state agencies have failed to act.