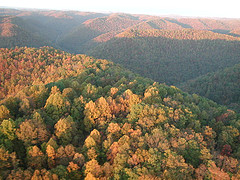 The weekend will also feature information on a new campaign to stop an egregious project called the Coalfields Expressway, a 50-mile-long strip mine masquerading as a highway in southwest Virginia.

Not sure if you can make it? Weekend in Wise is worth the journey.

Last September, two whirlwind weeks into the beginning of my service year with Appalachian Voices, the Boone staff told my fellow newbie and I to drive the twisty roads north towards the sleepy-seeming town of Appalachia, Virginia. When we reached the Weekend in Wise headquarters at Appalachia Civic Center, we found a committed community determined to grow awareness of mountaintop removal, strengthen the movement, and have a good time while doing so.

Representatives from the Wise Energy for Virginia coalition’s five non-profits (including Appalachian Voices) were there, joined by local residents and Southern Appalachian Mountain Stewards members who have witnessed the devastation mountaintop removal on their homeplace for far too long. There were curious college students as well as residents from other coal-impacted parts of Appalachia seeking fellowship and open dialogue.

Two days later, on the drive back to North Carolina’s coal-free mountains, my stomach churned with disgust at the pillaged landscape I had seen and outrage at the stories of human suffering that community members shared. I was inspired, however, by the strength of these residents, and by their willingness to share the truth with strangers to grow the movement to end mountaintop removal coal mining.

Weekend in Wise isn’t just about bearing witness to greed’s destruction. It’s also about learning how to combat mountaintop removal and its accompanying poisoned streams through practices like citizen water monitoring. Most importantly, Weekend in Wise is about solidarity and empowerment. For a native Midwesterner like me, it was about local Appalachian people telling me that the struggle for a clean future in these mountains was my battle, too.

Learn more about the 5th Annual Weekend in Wise and register here.