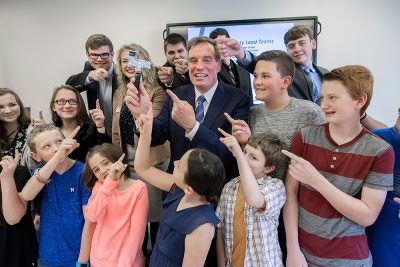 In nine Southwest Virginia schools, the new Virginia Space ThinSat Program is stirring excitement among students and teachers alike. Wise County Public Schools is listed as one of 12 lead institutes for this program, meaning they offer guidance and assistance for nine participating schools. Students involved range from fourth-graders to rising seniors.


The program is named after the ThinSat satellite, a slender satellite capable of transmitting data from a relatively low orbit just outside Earth’s atmosphere. Student engagement in this program is broken into three phases. In each phase, the students collect data at increasing altitudes. Wise County schools completed phase one and started phase two during the 2017-2018 school year.

Phase 1 included an introduction to sensors and the development of a sensor board. During Phase 2, the students were supplied with an engineering model to install their sensors into. The model was then sent to Indiana to be tethered to a weather balloon, where the Wise County sensors are currently awaiting launch, according to Jane Carter, chemistry and environmental science teacher at Eastside High and the lead mentor for all nine teams in the region. The sensors will reach an altitude of 90,000 feet on the weather balloon, and send data back to the students.

“At phase 3, we are going into extreme low-Earth orbit, and we will be launching aboard the Antares rocket on Nov. 10, 2018,” explains Carter. Once the ThinSats are deployed, they will orbit Earth for approximately five days and transmit more data to the students.

Elle Smith, a rising junior at Central High School, says she is excited to join participating students at Wallops Island, Va., to watch the launch of the rocket with their satellites aboard. 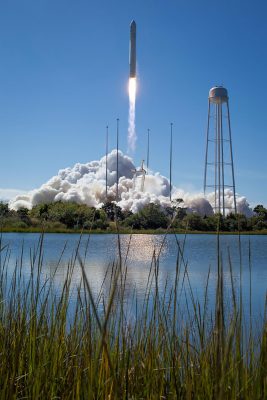 The students’ ThinSat satellites will be launched on Northrop Grumman’s Antares rocket. Photos by Tim Cox

The ThinSat program was created by Virginia Space, a state program established in 1995 to “promote commercial space activity, economic development and aerospace research within the Commonwealth of Virginia,” according to the program’s website. The program aims to advance science, technology, engineering and math education. Through this program, participants will be able to research the extreme low-Earth orbit region of space and rapidly test large satellite subsystems at a low cost.

Carter explains that because the students are collecting data and going through a pilot program where even she does not know the expected outcome, they are experiencing true science.

“They’re engaged because it’s hands-on, and … there’s lots of problem solving with it, and that’s what our kids need,” Carter says.

“We have a lot of kids who don’t want to do anything, and the only reason they go to school is sports,” student Elle Smith says. “But now we’re turning that around and the reason they want to go to school in the morning is the ThinSat because they know they’re gonna make a difference.”

This program has inspired the students and the educators involved, according to Carter. She says, “For me as an educator, that’s the most exciting part … they’re ready to go, they’re excited, wanting to explore, see what all is out there and what they can do.”

“So many times we are stereotyped in this area, and I think the students oftentimes allow that to dictate what they think they can do and where they can go,” continues Carter. “[But] they’re working on space projects [where] Wise County Schools are listed as a lead institute.”