The Senate and the L’awful’ Coal Ash Bill

To put it mildly, the supposed coal ash regulation bill S. 3512 falls short of our expectations. The bill — proposed last July by Sens. Hoeven (R-SD), Conrad (D-SD), and Baucus (D-MT) — shields utilities from their obligations to upgrade their unsafe ash dumps in a timely fashion, clean up sites that they have contaminated, or close leaking and unstable ponds and landfills. 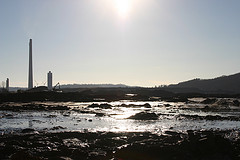 The aftermath of Kingston coal ash spill in 2008

Coal ash ponds are gigantic impoundments that contain the toxic byproducts from burning coal. S. 3512 won’t require deadlines for states to implement a permit program for coal ash ponds. The proposal even prevents the EPA from enforcing any standards contained in this bill, leaving the states free to do whatever they want.

To put it strongly and more correctly, S. 3512 isn’t OK at all. Tell the Senate today that clean water is your right.

Should we forget the Kingston coal ash spill? The U.S. District Court for the Eastern District of Tennessee recently ruled that the Tennessee Valley Authority could have prevented this 2008 accident, which released over 5.4 million cubic yards of toxic waste into local communities. The cleanup of this tragedy is going to cost $1.2 billion and will last through 2015.

Or maybe we should just move on from the intolerable damage that coal ash continues to do to wildlife? A recent peer-reviewed study described the cost of coal ash ponds since 1967 and found:

The costs and potential savings noted by the study, along with the conclusion that “surface impoundments pose unacceptably high ecological risks regardless of location or design,” are directly confronting the delusion in our Senate that coal ash is somehow benign.

Let’s suppose the coal ash ponds are benign, since they sit so close to our lakes and rivers. Two of these ponds sit in Asheville, excreting known toxins like selenium, chromium and thallium at levels exceeding the North Carolina health standard. Consider this, too: the French Broad River is collecting discharge from these coal ash ponds, showing the levels of manganese at 140x the state limit and the cancer-causing arsenic at 18x the limit.

These Asheville ponds have a “high hazard” rating from the EPA, meaning that if a breach of the pond happened, loss of human life is probable.

The coal and coal ash ponds aren’t safe, and we know how they have affected everyday people. How the life that the Copeland family built was lost in the Kingston coal ash spill. How dilapidated coal plants are spitting up plumes of ash in Louisville. How even a Montana rancher, whose cattle drink from waters containing coal ash chemicals, is feeling the hurt of the coal companies’ negligence.

We can organize against this abuse, like we did this past weekend when our Red, White and Water team gathered with over 200 people at the Southern Green Living Expo in Asheville. We expressed our right to clean water, and so can you.

Last Friday, more than 300 public interest groups representing millions of citizens from 43 states voiced their opposition to S. 3512. Let your opnion be heard! Help send a strong message to your senator that clean water is not negotiable. Ask them to oppose S. 3512 today.