The Southern Environmental Law Center recently released its fourth-annual Top 10 Endangered Places list of 2012, highlighting the scenic, ecologically and culturally rich areas throughout the Southeast that are being threatened by development, water issues and the environmental impacts of mountaintop removal and hydraulic fracturing.

The Catawba-Wateree River system originates in the Blue Ridge Mountains of North Carolina traveling into South Carolina and has been negatively impacted by the presence of coal ash in leaky unlined ponds along major tributaries. 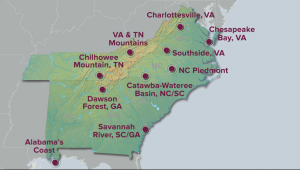 But that’s not all that is threatening this network of waterways. Water withdrawal used by power plants for steam production and cooling has had severe effects on the Southeast’s water supply.

Meanwhile, on the North Carolina Piedmont, a law that bans horizontal drilling throughout the region is being attacked by the gas drilling industry and their political allies.

Across the state, the Chesapeake Bay estuary has been polluted for decades. What some may not know is that this pollution creates dead zones incapable of supporting aquatic life.

Plans to construct and renovate highways have disrupted many distinguished recreation spots in Charlottesville, Va., and in Chilhowee Mountain, Tenn. Chilhowee Mountain is part of Tennessee’s Cherokee National Forest and known as a destination for outdoor lovers around the country.

More southern states such as South Carolina, Georgia and Alabama are experiencing severe environmental threats as well. The Savannah River, which stretches from South Carolina to Georgia, may lose many aquatic habitats as the Army Corps of Engineers plan to deepen its shipping channel.

The Dawson Forest, located just north of Atlanta, is threatened by a proposed $650 million reservoir that would drain 100 million gallons of water from the Etowah River each day to support Atlanta’s increasing water supply needs. Alabama’s coastline is on SELC’s Top Ten list for a second year because of the potential reoccurrence of spills like the 2010 Deepwater Horizon explosion — the largest offshore oil spill in U.S. history.

The SELC has released its Top Ten list for fours years now, hoping to raise awareness among residents of these areas and others in the U.S. The environmental law organization has nearly 50 attorneys and is involved in more than 125 cases and projects in its six-state region to fight against these potentially irreversible threats.

For more information about SELC and what it does, visit: www.southernenvironment.org.