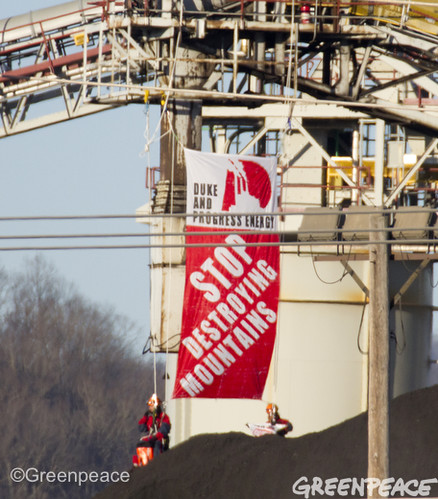 Please note: Community Meeting Being Held About The Dangers Of Coal This Wednesday at 6p.m. in Asheville at Posana’s Cafe. Click here to learn more.

GreenPeace is bringing the protest on coal pollution to North Carolina today (aka the #1 user of mountaintop removal mined coal), staging a protest at Duke Energy’s Lake Julian power plant in Arden, N.C.

Activists have reportedly secured themselves to the coal loader and conveyer to prevent coal from entering the facility and are planning to scale the 400-foot smoke stack to “send a message to both Progress Energy and Duke Energy that communities and the climate can’t wait for a renewable energy revolution.”

Our Red, White and Water Team is currently on the way to Asheville, so stay tuned for updates!

UPDATE 12:24 p.m.: According to an article by the Asheville Citizen-Times, as of 11:15 three climbers had reached two-thirds of the way up the 400-foot* smokestack. Sixteen activists are involved in the action, and according to a Greenpeace spokesperson some protestors have already been arrested.
(*note, 400ft number comes from Greenpeace Citizen-Times estimates the height at 300-feet)

UPDATE: Photos from Greenpeace’s action today include shots of the enormous banner hung from the 400-foot smoke stack at the Lake Julian power plant. According to an article by Mountain Xpress (which also has a great stop-action photo collage of the banner going up the smokestack), all activists have been arrested and the banner removed. See more pics on Greenpeace’s FlickR feed of the action.

Greenpeace activists are protesting the destruction and pollution caused by coal at the Progress Asheville Power Station this morning. Activists have secured themselves to the coal loader and conveyers, which will prevent coal from entering the facility. Additional activists are scaling the 400 foot smoke stack to send a message to both Progress Energy and Duke Energy that communities and the climate can’t wait for a renewable energy revolution. Coal plants like the Asheville Power Station damage communities and the climate at every stage of their lifecycle: the destructive mining practices, the burning, and the storage of toxic coal ash.

Progress Energy is currently in a merger bid with Charlotte based Duke Energy, which would create the largest utility in the United States.

“This plant runs on destroyed mountains, it spews out air pollution, it causes climate change and it poisons the water and the earth. If Duke merges with Progress, the new owners have a responsibility to the people of North Carolina to move to clean energy,” said Greenpeace climate campaigner and activist Robert Gardner.

The Progress Energy owned Asheville Power Station uses the most destructive form of coal mining, mountain top removal, which is flattening mountains across Appalachia. The plant produces 1,994 pounds of sulfur dioxide, 788 pounds of nitrogen oxides, and 2,629,243 tons of carbon dioxide. Its coal ash ponds are designated ‘high hazard’ by the EPA, meaning they are likely to kill people if they spill. Like other coal plants across the country, the plant causes death and illness in the community.

“Duke Energy could be playing a leadership role in the energy sector, and CEO Jim Rogers talks a good game on the environment, but the reality is vastly different. With more than $5 billion dollars worth of new coal investment on the books, Duke is clearly committed to dirty fossil fuels that poison our communities and destroy the climate,” Mr Gardner said. “If Duke Energy wants to be considered a leader in the industry, they’re going to have to get serious about phasing out polluting plants like this one, and make some real investments in renewable energy that will protect America’s future.”

1 Pings/Trackbacks for "Activists Stage Protest, Attempt to Shut Down Operations at Coal Plant in Arden, N.C."