Massey Energy has violated the Clean Water Water Act over 60,000 times, has been the biggest perpetrator of mountaintop removal coal mining and is directly responsible for the preventable deaths of 29 miners in the Upper Big Branch mine explosion in April of 2010, according an independent report commissioned by then- West Virginia Governor (now Senator) Joe Manchin. 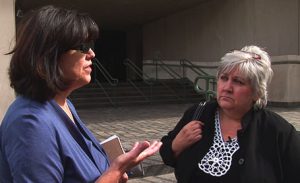 Over 35,000 Americans have joined our call to action to hold Massey Energy accountable for the lives, mountains and waterways they have ruined. Robert F. Kennedy, Jr., also joined the campaign and on a tele-conference implored Attorney General Biden,

“…to be one of the few public officials … who is willing to stand up in this country, to corporate power, to say at some point, corporations do not have the power to dismantle our democracy and violate our laws, willfully and systematically.”

On Friday, we took the campaign to Delaware. We met with the Attorney General’s office to deliver the petitions and to meet two strong Appalachian women who have been directly impacted by Massey’s various wrongdoings.  Betty Harrah is the sister of Steve “Smiley” Harrah, one of the 29 miners that died during the Upper Big Branch mine disaster.  Lorelei Scarbro has been an advocate of the Coal River Wind project, a campaign to halt Massey Energy from blasting away the top of Coal River Mountain, the last intact mountain in the Coal River Valley. She is the granddaughter, daughter, and widow of coal miners, and has family who currently work at the Upper Big Branch mine.

We then hosted a screening of The Last Mountain, the film that shows the massive destruction that Massey Energy has imposed upon the people of the Coal River Valley and beyond. After the film, we held a forum with Betty Harrah, Lorelei Scarbro, Clara Bingham, producer of The Last Mountain and representatives from Appalachian Voices and Free Speech for People.

Special thanks to Delaware Pacem in Terris, a peace group based in Wilmington and Sarah Culver, founding member of Rising Tide Delaware for help in getting the word about the campaign and the screening. Below is Sarah’s reaction to the evening.

Written by Sarah Culver:
The auditorium in the Delaware Art Museum was standing-room-only, and an audience ranging from high school freshmen to WWII veterans witnessed the utter horror and senseless devastation perpetrated by Massey Energy. The film was as powerful as it was grave, and I could tell from the continued silence after the film had ended and the lights were brought up that each person in that auditorium was still trying to process what they had just seen.

After the screening, an intense public forum was held to discuss the campaign to revoke Massey’s corporate charter.

Since Massey Energy’s corporate charter is issued right here in Delaware, and it is within our Attorney General Beau Biden’s right to revoke that charter as a consequence of their unimaginable number of safety and environmental violations, their reckless abandon of air and water safety standards, and, of course, Massey’s blatant, and unyielding disregard for the culture and communities of Appalachia.

To revoke Massey’s privilege to operate as a company would be a massive step towards the fight to save Coal River Mountain, to educate more people about mountaintop removal, to empower and defend union miners, towards a sustainable economy in Appalachia. Finally, it would bring a sense of closure and justice to the heartbroken people like Betty Harrah and the scores of others who are still struggling to get on, day to day, knowing that it wasn’t an ‘act of God’ but the utter negligence  of Massey Energy that took the lives of their husbands, brothers, sons, and fathers at Upper Big Branch on that senseless day in April 2010.

To hold Massey accountable would be nothing short of the beginning of an ethical and environmental revolution in this country, and the hills and hollows of Appalachia might be able to begin that long, slow road of recovery.

The good news is that you can help. Yes, you. Sign the petition to Delaware Attorney General Beau Biden today and ask him to investigate and revoke Massey Energy’s charter. As Lorelei asked so bluntly during the forum – “If not now, when?”

If the wonderful Appalachians who joined us on Friday night take nothing else back with them from their long trip to Delaware, I hope that it’s this: They have advocates here.

This message is for Betty and Lorelei: We know what’s happening, and we’re fighting for you. We marched with you on Blair Mountain in June, and we’re marching in solidarity with you still. Your sacrifices have not been in vain, and we have been so deeply honored and humbled by your trip over to see us.