The Rachel Maddow show has been great about covering some of the media circus the coal industry has caused in Appalachia ove the last few years. From the singing lumps of coal, to the stock-photo-FACES-of-coal scandal, to their top-notch coverage of the Upper Big Branch Mine disaster, they have been one of the leading news programs covering the devastating and deceitful practices of the coal industry in our mountains. In fact, this segment on the media-magnet-for-all-the-wrong-reasons that is Joe Manchin aired over the weekend, continuing some of the discussion (and even using some of the graphs) from our blog last week about mountaintop removal causing job loss. 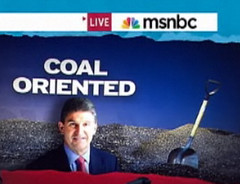 Substitute anchor Chris Hayes rightly points out that Joe Manchin has been making all the right mistakes to really earn his George Bush-like swagger. That much we expected. In fact, West Virginia resident Bob Kincaid told us:

This may just be my bias, but I honestly think Joe looks more silly and out-of-place in the Senate than Bush did in the White House. Believe me when I say I NEVER thought I’d say anything like that.

However,it was surprising to hear Hayes’ guest, New York Times energy reporter Matt Wald, suggest that the impacts of mountaintop removal on Appalachian citizens, mountains, and communities is “not very unusual” in the typical dynamic between the energy sector and the citizens who live where they produce energy. Wald also went out of his way to wrongly assert that what EPA did was “not a veto” (it certainly was), but in fact “they reversed themselves.” They did no such thing. As readers of this blog will know, while the Army Corps of Engineers did approve the permit, EPA never gave final sign off to the Spruce Mine permit, expressed concerns from the very beginning, and then vetoed the permit. Thats what it was. A veto.

Mr. Wald would be wise to have read his own newspaper’s editorial last week on this same subject.

From the NYT’s “A Clear No on Spruce“:

The Spruce No. 1 Mine, owned by Arch Coal, would have required dynamiting the tops off mountains over an area of 2,278 acres to reach subsurface coal seams. The resulting rubble, known as spoil, would then be dumped into the valleys and streams below — ruining, by the E.P.A.’s estimate, six miles of high-quality streams and causing “unacceptable” damage to the environment.

Thousands of miles of streams in Appalachia have already been poisoned in this manner in clear violation of the Clean Water Act.

Mr. Wald, we do not believe that mountaintop removal is not business as usual. We cordially invite you to come and visit Appalachia with us, do a flyover, and decide for yourself if the obliteration of more than 1.2 million acres, 500 mountains, 2000+ miles of streams, dozens of communities, 10s of 1000s of traditional mining jobs lost is “business as usual.”