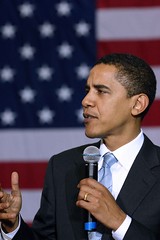 Many folks have asked what we thought of President Obama’s speech this evening. In particular, this section:

Now, clean energy breakthroughs will only translate into clean energy jobs if businesses know there will be a market for what they’re selling. So tonight, I challenge you to join me in setting a new goal: by 2035, 80% of America’s electricity will come from clean energy sources. Some folks want wind and solar. Others want nuclear, clean coal, and natural gas. To meet this goal, we will need them all — and I urge Democrats and Republicans to work together to make it happen.

1) Appalachian Voices aggressively supports efforts at the state and federal level that will help provide economic diversification in Appalachia, particularly economic development with a clean energy focus. This includes support for projects as diverse as the Coal River Mountain Wind Project and the bipartisan “Rural Star” energy efficiency legislation which passed the House last year. We will always continue to push for legislation that provides jobs, economic diversification, and a clean energy future for our country and our region.

2) As the President said the words “…by 2035…” one thing that struck me was that I don’t think anybody believes that there will be much of a Central Appalachian coal economy left in the year 2035. Much of the once dominant coal industry has already left the region, and industry analysts and their allies in Congress are saying that there just isn’t much of a future left in Central Appalachian coal. I guess Joe Manchin plans to be out of office by then? Sadly, many thousands more coal miners that Manchin and Joe Rahall purport to speak for will also be out of work long before then.

3) Mountaintop removal coal has never been and never will be a “clean energy source.” It doesn’t matter what you think about carbon sequestration, climate change, or emissions limits. As long as we are mining coal by mountaintop removal, it is dirty (and deadly) LONG before it gets to the power plant.

My two cents. Other reactions from Joe Romm’s Climate Progress, Friends Of the Earth, AWEA, GetEnergySmart!Now!, Michael Levi, and a good roundup from The Hill.

What’d you think of the speech?