A set of so-called “pro-coal” Representatives have introduced HR 6113 to prove that they care more about Don Blankenship’s approval than their constituents’ health. This bill asserts that Obama’s EPA threatens national security.

Continuing their march to ignore evidence, make stuff up, and push for an entirely rampant and unregulated coal industry, coal-bound legislators have introduced what they are calling the “Electric Reliability Protection Act” (HR 6113). If signed into law, this bill would defund EPA’s efforts to protect Appalachian citizens from the toxic valleyfills associated with mountaintop removal. In addition, the Representatives assert that the Obama Administration’s very attempt to protect citizens from toxic drinking water is indeed a threat to national security, which we’ll go into below. This is an election season bill that has little chance of passage. However, stunts like this allow Congressmen like Nick Rahall to prove that he needs Don Blankenship’s support more than he needs his constituents to have clean water, a decent job, or an average lifespan. This legislation is as cowardly as it is nihilistic, and just as irresponsible.

Of course, one of Senator Byrd’s final messages was that a majority of Congress opposes mountaintop removal, and it certainly shows in the lack of support for HR 6113. While a good bill like the Clean Water Protection Act (HR 1310) has 172 bipartisan cosponsors, HR 6113 has just 15, nearly all of them with some vested interest in the coal industry. 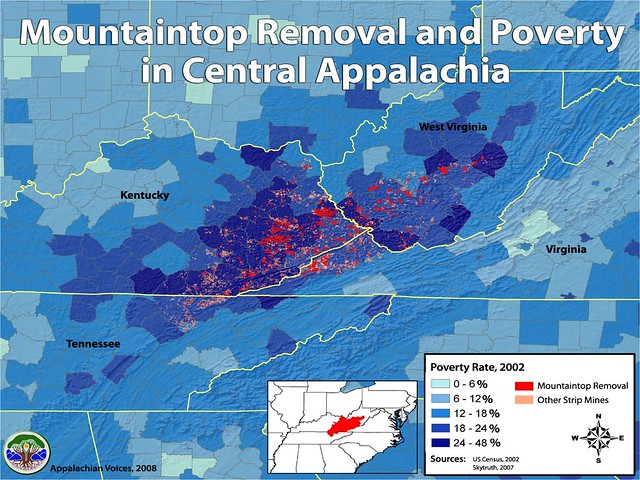 The lead sponsor, Congressman Hal Rogers (KY-05), has more mountaintop removal in his district than any other in the United States. More than 60% of mountaintop removal has been inflicted right there in eastern Kentucky, and Mr. Rogers wouldn’t have it any other way. Despite his staunch allegiance to letting the coal industry rampage through his district, KY-05 has the 7th highest poverty rate in the nation. In fact, 37.3% of the children in Mr. Rogers’ district live below the poverty line. This is all too common for the children of Appalachian communities left impoverished by (among other things) mountaintop removal mining and lack of economic diversification. Communities in Appalachia that are not relying on mountaintop removal do much better economically. In beautiful western North Carolina’s 5th district (home of Appalachian Voices’ HQ), the topography is similar to eastern Kentucky, but the poverty rate is half that of Rogers’ devastated district.

Congressmen Rogers’ and Rahall’s districts are #1 and #2 for most mountaintop removal in the whole country, right there at the top (congrats fellas!). But Rahall and Rogers have much more in common than that. In the latest Gallup “physical well-being” index, Rogers and Rahall sit on top of the charts again for having …wait for it… the sickest districts in the whole United States! Fellow Blankenship-lover Rick Boucher (D-VA-09) comes in a distant third in both mountaintop removal and ability to let the coal industry sicken his constituents to an early death. 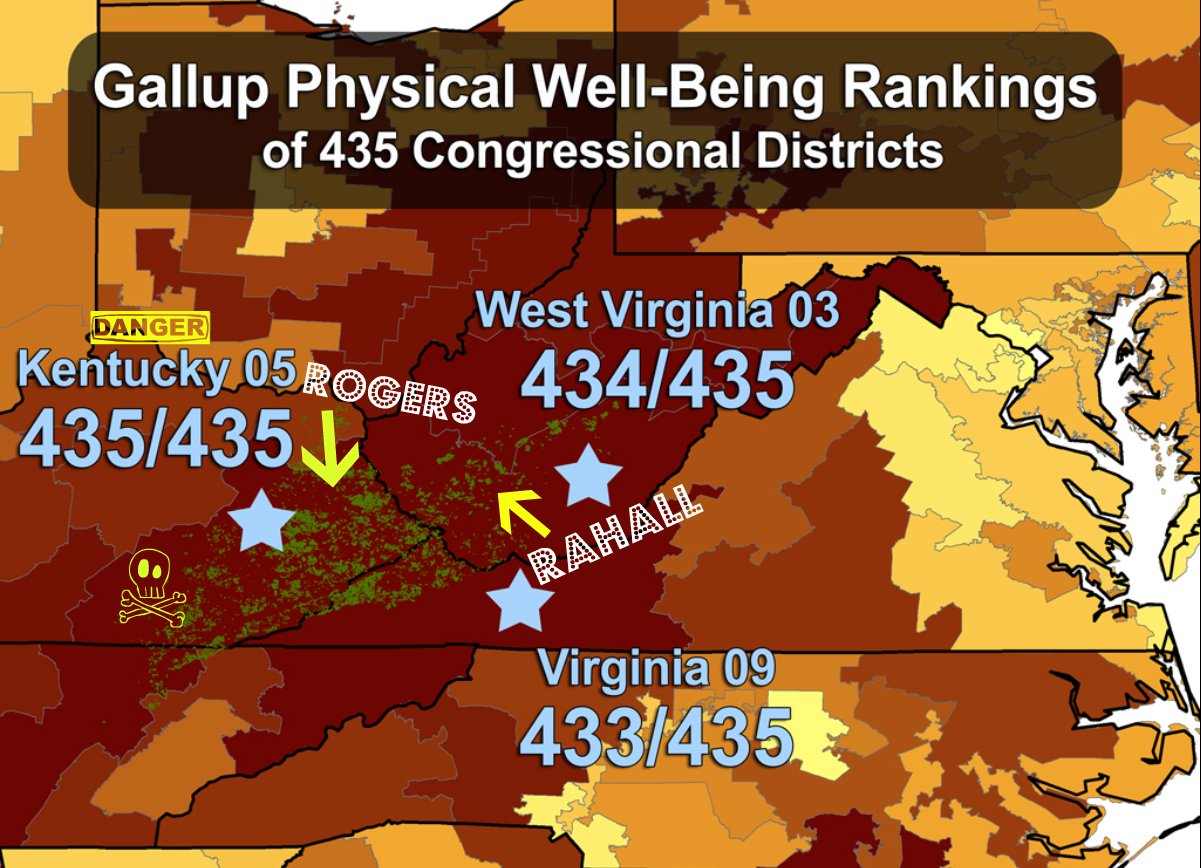 So, since mountaintop removal has been such a resounding success (in getting Don Blankenship a performance bonus), these Congressmen have decided to return Blankenship the favor by introducing HR 6113.

The problem is that this trainwreck of a bill is the legislative equivalent of an unconstructed valleyfill. The language is horribly mangled, the data is completely wrong, the assertions are just flat out lies. Perhaps its because those that introduced the bill cited a ridiculous report (apparently written by a 3rd grader) from Senator Inhofe’s (R-OK) office. Or perhaps they just don’t care anymore.

I hate to do it, but lets take a quick look at the actual language of HR 6113, see what it says, and do some classic “true or false?”

The United States consumes over 1 billion tons of coal annually. Most of this coal is used to meet nearly one-half of the Nation’s electricity needs. The remaining amount of coal is used to produce, among other things, steel, plastics, synthetic fibers, medicines, and coke.

On June 11, 2009, the Environmental Protection Agency and the Department of the Army issued a Memorandum on ‘Enhanced Surface Coal Mining Pending Permit Coordination Procedures’.

As of March 2010, under these new procedures, the Environmental Protection Agency has unlawfully delayed Clean Water Act permits for 190 coal mining operations.

FALSE: “Unlawfully delayed” implies that the EPA does not have oversight over 404 permitting, but such oversight is specifically written into the Clean Water Act. You could possibly make some argument for one mine – Arch’s Spruce #1 where approval had already occurred – but for the other 189 permits this is demonstrably false.

These 190 coal mining operations are expected to produce over 2 billion tons of coal (throughout the life of operations) and support roughly 17,806 new and existing jobs as well as 81 small businesses.

FALSE: Here they make the grave mistake of citing a report that was done (apparently by a 3rd grader) for purely political reasons and doesn’t use good data. The report asserts, at various times, that the 190 permits are holding back A) 17,806 jobs, B) 14,814 jobs, and/or C) 2,992 jobs.

But don’t take my word for it. Here’s a few quotes from the Inhofe report:

If the coal mining operations that are on hold were allowed to move forward, they would generate 2,992 new jobs in the Appalachian region, a 5% increase in coal mining jobs.

These permits are expected to produce over 2 billion tons of coal throughout the life of operations, support roughly 17,806 existing and new jobs, and support 81 small businesses.

These numbers do add up if you put them all together. But they still need to explain to me how the permits that have not been approved support 14,000 jobs. Until they have been approved and there is a job site, then it is just a permit. And that approving the permits would create 2,992 jobs. Or maybe they are just counting every single person whom currently working on an already permitted strip-mining site? According to 2008 numbers from EIA, thats about right for ALL strip-mining jobs in central Appalachia. Production has plummeted in those two years, but newer data may not have been available when they released that report.

#4 also assumes that the permits in question are the limiting factor in production, however, the productive capacity of mines in Appalachia and across the country far exceeds demand. In other words, from a national perspective, it’s demand that is limiting production, not permits.

Due to the actions of the Environmental Protection Agency, roughly 1 in every 4 coal mining jobs in the Appalachian region is at risk of elimination, 81 small businesses will lose significant income and will be at risk of bankruptcy, and more than 2 years of the Nation’s coal supply is in jeopardy.

FALSE: See response to #4. In the last two years, only about 1/4 of surface and underground permits in West Virginia have had any fills at all. Tennessee doesn’t even use fills anymore. OSMRE Director Pizarchik has told us that Pennsylvania doesn’t use fills anymore. Congressman Rahall knows this (at least, he should.) But lets just say that, somehow, EPA managed to cut ALL of Central Appalachia’s surface mining production. This would still only amount to – AT MOST – a 4.5% drop in availability of electricity. If you multiply the amount of electricity we get from mountaintop removal by 22.2 (lets say, because Senator Inhofe told you to) then you get 100%!!!! ARE YOU SCARED YET?!

From 2008 to 2009, the use of coal for electricity generation dropped 12.8% in the United States. In eastern Kentucky, production is down 22.7% just this year! Last year wasn’t even a good production year. And thats the point. The coal is going away, and everything associated with coal is going away – the production, the jobs, the political influence, and – most encouragingly – the singular dependency one form of economic development.

By preventing the production and use of a 2-year supply of coal, the Environmental Protection Agency is putting electricity reliability for consumers at risk.

TRUE. Besides the fact that they throw a bunch of false stuff for good measure, this guidance was actually released. I don’t see how they can argue that protecting people from blasting and being poisoned harmed national security though. More on that later.

FALSE:This is an opinion that is stated as fact. The courts will weigh in on this question based on NMA’s recent law suit against the EPA, which experts seem to agree will be pretty difficult. This morning’s InsideEPA has a piece called Despite High Legal bar, Indusry Seeks to Block EPA’s Mining Guidance. Its subscription only, but you get the idea.

The June 2009 memorandum and the April 2010 guidance meet the definition of a rulemaking under the Administrative Procedure Act because each is an `agency statement of general or particular applicability and future effect designed to implement, interpret, or prescribe law or policy’ under section 551(4) of title 5, United States Code.

The Environmental Protection Agency has not gone through notice and comment rulemaking to prescribe the new policies set forth in the June 2009 memorandum or the April 2010 guidance in violation of the Administrative Procedure Act.

TRUE, except for perhaps their assertion that it is in violation of the APA, which the court will discuss.

Any use of the June 2009 memorandum or the April 2010 guidance to review, delay, and veto Clean Water Act permits is unlawful.

The actions of the Environmental Protection Agency could cause drastic increases in the Nation’s energy prices due to decreases in coal supply.

FALSE See #6. Also, with demand static and Appalachian coal production plummeting, why can’t we replace the 4.5% (or less) we get with mountaintop removal with clean, job-producing energy efficiency? OH WAIT WE CAN. Even if we couldn’t, under the current guidance coal companies could replace that lost supply with coal mined underground or surface mining that doesn’t use valleyfills. Or we could get our country to invest in an ambitious RES, but thats another story.

By preventing the United States from reducing our reliance on foreign sources of energy and by reducing our ability to produce energy domestically, the Environmental Protection Agency is harming national security.

FALSE: There is no valid argument that increased domestic coal production is reducing our “reliance on foreign sources of energy.” We are already exporting a whole lot of Central Appalachian coal overseas as it is, and there is no evidence whatsoever that coal imports are associated with domestic production. I didn’t see a line in this bill about not shipping central Appalachian coal to China as we currently do, because that is how Don Blankenship and Nick Rahall want it.

Congressmen, here’s some advice. Next time you want to try and introduce legislation that could pass, try and do better than 3-of-12 on the True/False test. Otherwise people will think that you don’t take your job seriously.