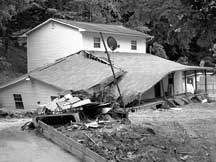 This house, near Varney, W. Va., was heavily impacted by the fast-moving floodwaters that hit southern Mingo County communities suddenly in May. Private bridges, roads and homes were affected throughout the area. Photo by Sarah Vig

Tina England knows why flood waters rose seven feet on the road up Big Huff Creek: recent logging and new roads to gas wells at the top of the mountain.

“Coming off a big mountain like this, there’s nothing to hold it (the dirt from the roads) back,” England said. “All these little hollows feed down to Huff Creek. It was like a dam let loose.”

Flooding led state officials to declare a state of emergency in parts of West Virginia in early May.

This was the 19th flood in 11 years to hit Mingo County and surrounding areas of southern West Virginia’s coalfieds, and the worst since four terrible consecutive years, beginning July 8, 2001.

This year’s storms smashed mobile homes, tore away nearly 500 private bridges across creeks to homes, and covered miles of yards in more than a foot of mud along Huff, Gibert and Pigeon creeks.

After the 2001 flood, filmmaker Bob Gates and I spent months investigating land disturbances above the flooded areas. At nearly four dozen severely flooded areas, we found old and new mining, slag piles, logging or gas-well roads, all documented at www.wvcoalfield.com. Though neither Bob nor I could spend as much time examining the recent floods, we were curious whether land disturbances were involved this time, and whether control measures, passed after the 2001 floods, had helped reduce damages.

Everywhere we went, residents pointed out land disturbances, which we then examined. Timbering above Big Huff creek is not a pretty site. Loggers had used newly built gas-well roads as access to a half dozen logging areas. Few of best management practices required by the Division of Forestry appeared to have been used. The dirt roads had not been reseeded. Rather than recommended gentle slopes and curves, roads were steep and straight, funneling water straight down the mountain.

Along Route 52 near Varney, only a few gravestones at the Marcum Cemetery still stand in a sea of rocks and dried mud that spilled out of the mountain and blocked the road for nearly a day. I hiked about 2,000 feet to the top of the hollow, climbing over huge trees and boulders tumbled into the tiny stream. At the top, I could see a new gas-well road cut around the hill, supported by a tiny valley fill, which appeared to have partly collapsed into the stream. A violation was issued for the erosion.

On Big Lick Fork, south of Baisden, Bonnie Mounts believes an old gas-well road caused the slide that just missed her house, but plowed into the one next door, making it uninhabitable. A neighbor who had ridden an ATV up the road said drainage had been rerouted about five years ago, and the hill had been sliding ever since.

Massey Energy has mountaintop mines along about five miles of Gilbert Creek. Mounts’ daughter believes her damage, on Pickering Creek, came from runoff from Massey’s Frasure Creek mine, which had begun work in her area. Across from Mounts’ own home, a narrow gully turned into a roaring river for two days after the storm.
Her son-in-law, who had worked for Frasure Creek, said the runoff came from the mine. A new valley fill can be seen behind the Baisden firehouse. Mounts said it washed out in a previous storm, and again on May 9. No violations were issued there, but a Massey mine was cited for flood damage in Rawl.

Homeowners have been disappointed by the response from the Federal Emergency Management Agency. Though 2,800 people have applied for help in southern West Virginia, and FEMA has examined 2,200 buildings, people are reporting FEMA sometimes offers only $5,000 for severe damage. In earlier floods, many victims were never fully compensated. The best hope may lie with lawyers who have been approaching flood victims—though court cases could take several years.

State officials who deal with floods attribute much of the damage to the storm falling on ground saturated by nearly a week of lighter rain. “You don’t have run off until infiltration capacity is at the maximum,” said Jim Pierce, who headed DEP’s 2001 flood study. May 9’s peak rainfall of 3.95 inches in Pineville was less than the 5.32 inches at Mullens in 2001. Gilbert and Huff Creek were in a band of 2.75 inches.

Nonetheless, Pierce believes better runoff controls are needed for logging and gas-well roads. In 2003, DEP did win passage of strong storm water controls for mining, including revised valley fill design. For the most part, Pierce said, they work, though there were a few places where storm water overwhelmed design controls. However, none of the recommendations on logging passed the legislature. The Division of Forestry doesn’t have enough inspectors to monitor all active logging, Pierce said, let alone check reclamation. Gas-well roads can funnel high water to the wrong places, he said, and rock fills under roads can liquefy in storms.

After the 2001 flood, a task force recommended a number of measures to control damage from flooding. In addition, a 2000 federal law requires all states and counties to make, and regularly update, hazard mitigation plans. Though flooding is listed as the number one hazard in Mingo, no mitigation projects had been placed in these flooded areas, said Jimmy Gianato, director of the West Virginia Division of Homeland Security and Emergency Management, who was emergency director in Kimball in McDowell County when it was hit hard in 2001 and 2002. Since much of the flooded area isn’t in federally mapped flood plains, Gianato said, construction limitations don’t apply. One quandary will be how to require better-designed private bridges, he said.

State mitigation officials also plan to work with the U.S. Army Corps of Engineers on computer models for ways to prevent future damage.

Another option is moving people out of flood-prone areas. The Mingo County Redevelopment Authority expects to have affordable housing built within two years on mountaintop removal sites on Horsepen Mountain, near the King Coal Highway and Twisted Gun golf course. Bonnie Mounts, who runs the restaurant at the golf course, said she’d love to move to housing on high ground.