Story and photo by Sarah Vig 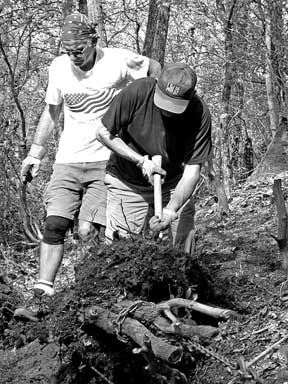 Volunteers with the Carolina Mountain Club help to build new trail in the mountains of North Carolina, bringing the Mountains to Sea Trail nearer to completion. In its completed form, the trail will span 1000 miles across the state.

The Mountains to Sea Trail is halfway home.

With over 500 of its 1000 miles completed, the ambitious project is well on its way to spanning the entire length of the state of North Carolina.

The Mountains to the Sea Trail (called the MST) owes its start, and continued to existence, to volunteers.
Perhaps it is because it is so ambitious that it took 20 years for the trail to go from proposal to possibility. But its allure, and the hard work of hundreds of volunteers across the state are keeping the dream alive and bringing the project steadily closer to completion.

According to Kate Dixon, Executive Director of Friends of the Mountain to Sea Trail (FMST), the idea of the MST was first proposed by Howard Lee in 1977 at a trails conference. At that time, Lee served as the secretary of the North Carolina Department of Natural Resources. 20 years later, trail expert Alan DeHart, “essentially got tired of waiting,” says Dixon. She says DeHart sat down with a map and figured out how to use existing trail systems in the state, back roads and bike paths to complete the statewide trek. DeHart founded FMST and he and a friend became the trail’s first thruhikers.

Since the inaugural hike, enthusiasm and support for the trail has only grown. “There is a romance to the idea of walking across the state,” Dixon says of the enduring place the MST holds in the hearts of North Carolina hikers. “ It represents for a lot of people what they most love about North Carolina.”

Currently the trail has more than 500 miles of completed footpath and a nearly equal length of temporary trail connectors. The goal, however, is to move the trail entirely off the roads, and volunteer task forces across the state are helping it to move closer to that goal.

Breaking Ground
In 2008, the Mountains to Sea trail had around 500 volunteer trail builders and maintainers. Many of these volunteers came from hiking clubs across the state including the Carolina Mountain Club (CMC), the Saura Town Trails Association and the Carteret County Wildlife Club.

CMC has three crews that go out each Monday, Wednesday and Friday, plus a bi-weekly Saturday crew. By virtue of their size (usually between 10 and 15 people come out on any given Friday), it is the Friday crew that most frequently builds new trail, say Piet Demhorst, who has headed the crew with another experienced trail builder, Skip, for nine years.

Trail building is multi-step process. After the trail is “blazed” by a team of experienced volunteers, the route is approved by the federal or state officials as well as a biologist and an archaeologist to ensure that no ecologically fragile or archaeologically important sites are being compromised. When the route is approved, a small team of people with the required certifications uses chainsaws to remove the large obstacles in the trail-to-be. A second team uses a hoist to pull the stumps out of the ground, often with the help of a two-sided tool called a polaski, which looks like an axe on one side and a pickaxe on the other. A third and final team takes up the rear, using hazel hoes and loppers to cut the trail into the ground and remove roots and smaller trees and plants.

The act of trail building with its chainsaws, ripping stumps out of the earth, and cutting into the hillside can at times seem almost violent. However, Dixon and Demhorst both emphasize that a well-built and consciously placed trail protects the land. “We want people to be able to enjoy public land,” Dixon explains, ”trails are the best way to do that.”

Alan, part of the hoisting crew, has been going out with the Friday trail crew for more than six years. “My wife and I strongly believe in volunteer work,” he explains to me. “I’m giving a gift. This is going to last forever.”

Coming Together
Dixon indicates that the trail is “getting close to completion in the mountains,” meaning that from the trail’s starting point at Clingmans Dome in the Great Smokies to Stone Mountain State Park in Roaring Gap, N.C., one will soon be able to hike without ever touching the road. In addition, there are two task forces building large sections of trail in other areas: one between Blowing Rock and Wilkesboro, the other between the Triad and the Triangle. These segments are expected to be finished within the next 5 years.

These three areas have been easiest to complete because of the availability of state and federal land. In other areas, such as between Raleigh and New Bern on the coastal plain, or between Stone Mountain and the Triad, public land is much harder to come by. FMST is working with land trusts to encourage donations of easements, and with the state to encourage the purchase of key tracts of land. Recently, the state of North Carolina followed the group’s urgings and purchased $8.5 million in land for the project in Beaufort, Alamance, Orange and Johnson counties.

As the trail is under ongoing construction, the FMST encourages hikers who are planning trips to contact them for updated trail information. “Things like camping haven’t been worked out yet,” Dixon says. FMST also sends out an e-mail to its listserv every six weeks or so with updates on the newest developments. Interested individuals can sign up for the listserv at the group’s website, ncmst.org.