According to the National Gardening Association estimates, a well-maintained food garden yields about a $500 return. Some folks are keeping small gardens just to save money on growing food bills, and an expanding number of people are growing larger gardens to sell the surplus, while others simply enjoy easier access to homegrown organic produce. Photos by Kent Kessinger.

Talk about a shovel-ready project! Federal legislators may not have had home gardens in mind when they crafted the American Recovery and Reinvestment Act to provide funding for ready-to-go infrastructure projects, but First Lady Michelle Obama certainly did. Less than a month after the President signed the legislation, the First Lady was out on the White House lawn in her tennis shoes, helping to break ground for an organic vegetable garden and making Roger Doiron a very happy man.

The founder of Kitchen Gardeners International, Doiron launched the EatTheView.org campaign during the presidential campaign between Barack Obama and John McCain to urge whoever was elected president to lead by example and plant a garden at the White House. More than 100,000 people signed Doiron’s White House Victory Garden petition, and the Obamas responded.

Michelle Obama’s foray into edible landscaping is not the first time a First Lady has set such an example. In 1943, Eleanor Roosevelt planted a victory garden at the White House to inspire Americans to do the same. They responded. At the peak of the victory garden movement, nearly 20 million gardening Americans produced an estimated 40 percent of the nation’s fresh fruits and vegetables.

Although we live in a very different America today, the devastating impact of the recession on family budgets, rapidly growing environmental concerns, increasing worry about genetically altered crops and a back-to-basics mindset have all contributed to a resurgence of interest in home-grown food. The victory gardens of the 1940s have been reborn in the recession gardens of the 2000s.

Even before the full impact of the recession hit American families, food gardening was on the rise. According to the National Gardening Association, 2008 saw a 10 percent increase in vegetable gardening compared to 2007, and gardeners spent $2.5 billion that year to purchase seeds, plants, fertilizer, tools and other gardening items.

In 2009, an estimated 7 million more households will swell the gardening ranks—a 19 percent increase and nearly double the 10 percent growth from 2007 to 2008. As a result, seed companies are reporting double-digit increases in sales this year over last and are even selling out of some popular varieties. 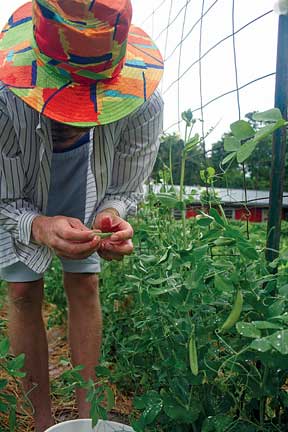 Doubtlessly, much of this spike in interest is economic. According to the U.S. Department of Labor, grocery store food prices rose 6.6 percent in 2008, the largest annual increase in nearly 30 years. This year, with many family breadwinners out of work and struggling, the idea of offsetting the total on the grocery store receipt with some outside work and a few seed packets has been an attractive proposition—and a financially solid one. According to National Gardening Association estimates, a well-maintained food garden yields about a $500 return, taking into account a typical gardener’s investment and the market price of produce.

But it’s not all about money. Just ask the head of one of the country’s largest home-market seed suppliers.
“Gardens inspire the kind of optimism the American public is craving right now,” said George Ball, chair and CEO of the 133-year-old W. Atlee Burpee & Co. seed company. “Children growing up during this renaissance in vegetable gardening will learn valuable lessons about nutrition, nature, self-sufficiency and respecting the earth by gardening alongside their parents. The state of the economy has certainly played a role in the increased interest in edible gardening, but folks are not going to let their vegetable plots go fallow when the economy heads north,” Ball continued. “People have an innate desire to take control of our own destinies, and vegetable gardening allows us to do this.”

Dr. Marion Simon agrees that the interest in home vegetable gardening isn’t just about the potential savings on the family food bill. Simon, the state specialist for small farms and part-time farmers at Kentucky State University, said one of the top reasons people are turning to home food production is their personal health. Many people have told her, she said, that their doctors have recommended home gardens as a good way to help control diabetes and to tackle weight problems.

Simon’s department holds sustainable agriculture workshops on the third Thursday of every month for people who want to grow small “truck gardens” that will feed their families and even yield some surplus to sell. The popular program attracts about 1,200 people each year, and its popularity is growing. “A lot of people are looking at gardens that haven’t looked at them before to save money on their food,” Simon said.

But several other motivators besides personal health and economics are attracting everyone from high school students to young married couples to farmers in their 70s to the monthly workshops. Among those motivators, Simon said, are the growing interests in eating locally grown foods, in using organic methods and in protecting wells and groundwater from contamination.

Home gardens can produce a significant community effect, Simon explained. She knows of neighbors who sell their extra harvest to neighbors, a factory worker who sells fresh produce to his co-workers and a number of growers who sell their surplus on the side of the road—all growing the local market movement, distributing healthy food and making a little extra money at the same time.

But the best thing about an organic home garden? Kentucky farmer Dana Lear smiled and said, “You can just pick a snack, wipe if off on your shirttail and eat it.”