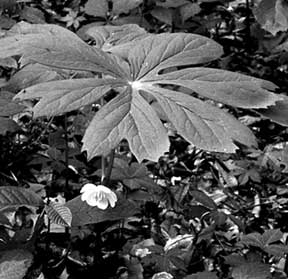 Large leaves of the mayapple shelter a single white blossom, which later yields the plant’s fruit. Photo by Rick Mark

What first caught my eye was the tightly wound green bundle atop the stem. They looked like closed umbrellas. “What are those?” I asked, pointing. “It’s Jack-in-the-Pulpit,” my friend told me, and I let the name slide over my tongue. I pictured a preacher clasping his hands in front of his congregation, his head bowed. “It’s bloodroot,” my father contradicted, and I imagined piercing the thick stem with a needle and watching red liquid ooze out of it.

What I’d seen, and was so enthralled with, was neither Jack-in-the-Pulpit, nor bloodroot, but Podophyllum peltatum, commonly known as the mayapple. Within a matter of days, the leaves had unfurled, spanning several inches, looking even more umbrella-like. They took over the ground, preventing me from seeing anything beneath their foliage. My favorite part of the mayapple is the flower peeping out from beneath the leaves, hidden from above, different from the typical flowering plants whose color bursts forth atop their stems.

Mayapples are different. Each May, all over the eastern United States and Canada, their flowers bloom. The plants are either one or two-leaved, and only the two-leaved plants produce flowers. If you look beneath the unfurled leaves, a delicate bloom emerges from the crotched stem (Peltatum is Latin for “shield-like,” an apt term for the broad leaves that shield the flowers from view). The petals are milky white and about two inches across with a yellow center, making the blossom look something like an egg.

While the flower blooms in May, the fruit which gives the plant its common name, does not appear until later in the summer. The “apple” is a yellowish fruit one to two inches long, and is the only part of the plant that is not poisonous (ed. note: unripe fruit are toxic like the rest of the plant, ripe fruit are described as soft, yellowish and have a cloyingly sweet smell). Though I have never tried one, the apple is described as tasting anywhere from completely tasteless to lemony.

Though the plant is poisonous, and classified by the FDA as “unsafe,” there are many purported medicinal uses, most of which I fortunately have no need for. Native American tribes used to gather and dry the rhizome (the underground stem which can grow up to six feet in length), grinding it into a powder. They brewed the powder like a tea, and drank it as a laxative and cure for intestinal worms. In modern medicine, extracts from the plant are used to treat genital warts and skin cancer.

While not one to blithely disregard cancer treatments, my fascination with the mayapple stems primarily from its physically dramatic entrance. The initial sight: an aerodynamic structure, like a missile aimed towards the sky. Then the leaf, or leaves, slowly unwinds from the stem and fans out, arching over the ground. Were I tiny, I would happily grab the nearest mayapple leaf to cover myself with in a sudden rain squall. Not being Lilliputian, and thankfully not suffering from skin cancer or warts, the only use mayapple has for me is its beauty and uniqueness, which luckily is enough.

When I returned to the first spot I had found them, I was amazed to see how the small, bundled plant had grown into a giant (relatively – the stems average 15 to 20 inches tall, and the leaves span 10 to 15 inches) umbrella. Because of their long rhizomes, mayapples tend to grow in clusters, and they can be seen throughout the region, blanketing forest floors.

The flower that bows its head beneath the great leaves reminds me of a supplicant, which in turn reminds me of my own relationship with nature. While most flowers struggle to attract pollinators with their bright colors open to the sky, the bashful mayapple seems to hide. In the same way, I am hidden as I walk beneath the canopy of trees. I find peace and solitude in the woods, away from “pollinators,” from people wanting my attention, needing me for something.

In the mayapple’s unusual flower, I have found a metaphor for myself. And more than just a metaphor. A reminder of how I want to approach the mayapple’s forested world – humble, shy, non-intrusive. Nothing more than a supplicant bowing my head as I search for peace beneath the dappled greenery.