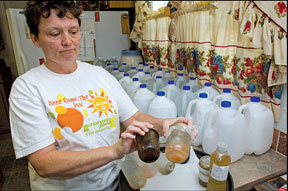 Maria Lambert, a resident of Prenter Hollow in West Virginia, holds jars of contaminated water from a Prenter home. Behind her are jugs of water brought in for the community to drink. Photo by Paul Corbin Brown

A clean glass of water is difficult to find in Prenter Hollow; a glass from the tap looks more like a glass of dirty tea.

Residents in Prenter claim that their private water wells were contaminated from toxic coal slurry that the companies injected in the abandoned underground mine shafts surrounding their community.

“The legal premise is multi-layered,” Roger Decanio, attorney for the Prenter Hollow case said. “We are claiming personal injury, property damages and a request for medical monitoring against a variety of local coal companies.”

The suit was filed in 2008, and preliminary motions were heard in the summer of 2009. The trial date is set for April 2011, but it may be years before the case is resolved.

According to the EPA,“[coal slurry] contains harmful contaminants which … may present an imminent and substantial endangerment to human health.”

Over 2 billion gallons of coal sludge and slurry have been injected in the abandoned underground mine shafts that border the community.

The Prenter court case is similar to the case in Mingo County where 750 people sued Rawl Coal Sales & Processing – a Massey subsidiary – for groundwater contamination also allegedly linked to coal slurry injections into underground mine shafts.

The drinking water in Boone County – the largest coal-producing county in the state – is now riddled with the same chemicals and toxic heavy metals that are found in coal slurry, such as iron, manganese, barium, arsenic and lead.

These chemicals have been found at concentrations that exceed the U.S. Safe Drinking Water Standards and can have serious health effects.

“In studies I have done of mining areas in West Virginia and Appalachia, the types of health problems I see include higher rates of some forms of cancer, cardiovascular disease, respiratory disease, kidney disease, dental health problems, and poor birth outcomes including low birth weight and congenital abnormalities,” said Dr. Michael Hendryx, director of the West Virginia Rural Health Research Center. “These problems are consistent with exposure to mining pollution through either air or water transport routes.”

Dr. Ben Stout of Wheeling Jesuit conducted water tests for some of the residents in Prenter Hollow. “What bothers me the most is that these folks have been unknowingly exposed to heavy metals in their drinking water for some period of time,” said Dr. Stout. “Many of the elements of concern, like barium, aluminum, beryllium, antimony and lead are odorless, colorless, and tasteless, even when they exceed drinking water quality standards.”

The plaintiffs are suing for personal injury and property damage. “The personal injury claim is based on exposure to contaminated water,” Decanio said. “These are chemicals in concentrations that are normally not found in that high amount nor in that small of a geographic area, which has to be related to the coal industry.” In addition, property values have plummeted, “because no one wants to buy a home with contaminated water,” Decanio said.

The case also calls for medical monitoring to continue observing the medical status of Prenter Hollow residents, who may have latent diseases that could develop as result of chronic long-term exposure to the contaminants.

In 2008, the community founded the Prenter Water Fund, which is supported through private donations. Since residents can no longer use their well water for potable purpose, they have set up a delivery system where 55-gallon water barrels are installed in their homes to provide clean drinking water.

“When you go home and have a glass of water or when you put your kids in the bath tub, you don’t think about it, but unfortunately these people have to because it could harm them,” Decanio said.