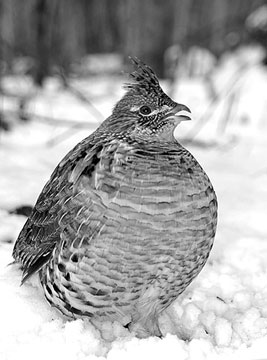 It sounds like a drum beat; starting slow, the tempo increases as the air compresses between his cupped wings flapping towards the side of his body. The ruffed grouse stands on his display log in early spring performing this theatrical display to advertise his territory, confuse predators or attract nearby females.

The ruffed grouse is a highly valued nonmigratory game bird that is found all across the Appalachian Mountains and up into Canada and Alaska. Their territories can range from 50 to 100 acres of deciduous forests with dense undergrowth for coverage from predators. The ruffed grouse is approximately 15 to 19 inches long with a small crest on top of its head.

An extensive research project conducted by the Appalachian Cooperative Grouse Research Project (ACGRP) involved 12 study sites in eight different states in the central and southern Appalachian region for a period of six years. More than 200 researchers were involved during the course of the study, representing five universities and a variety of state, federal, and private organizations.

The study observed over 3,000 grouse that were captured and fitted with radio transmitters, and then tracked using radio telemetry. The observations helped to isolate factors related to the decline of ruffed grouse in the study area and to devise improved management methods.

A major goal of the research was to estimate reproductive and survival rates, and identify factors influencing grouse populations. The researchers found a strong correlation between hard mast production, particularly acorns, and reproduction success rates and post-hatch chick survival of ruffed grouse.

“We found that in years following a very good acorn crop, chick survival was much higher than in years following a poor acorn crop,” Dr. Dean Stauffer, Virginia Tech’s academic and university coordinator for ACGRP, explained. “We felt the main reason was that when the hens eat a lot of acorns, they have a higher fat content, which provides a better early food supply and better chick condition when they hatch.”

This year produced an average to slightly above average acorn crop, meaning that chick survival should be about average. 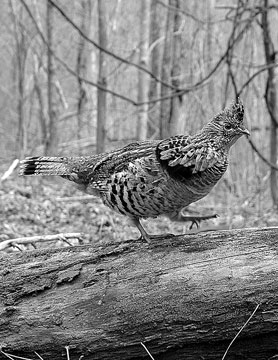 The primary contributor to shrinking grouse populations in the Appalachian region over the last several decades has been the decline in young forests, a critical habitat for grouse. An additional factor is related to poor chick survival rate.
“One notable finding was that while egg hatching success was high, chick survival was very low, with a 5-week survival rate of only 22 percent over the course of the study,” Stauffer said.

Exposure to cold weather is another danger because the chicks cannot maintain their own body temperature during the first few weeks of life.

“The chicks are pretty much full grown by November, though, so they are well prepared to enter the winter,” Stauffer said.

In the winter, ruffed grouse actually grow small fringe projections along the sides of their toes to help them walk across the snow, like avian snowshoes. In the more northern regions of their habitats, ruffed grouse may also burrow in the snow to roost below the surface for the night.

One of the goals of the ruffed grouse research project was to determine whether hunting was detrimental to grouse populations, and ACGRP was given a unique opportunity to conduct a true experiment to address this question. During the last three years of the study, with the cooperation of Virginia, West Virginia, and Kentucky, the ACGRP was able to close the hunting season on three study sites. In the end it was determined that, “hunting did not have a negative effect on grouse populations,” Stauffer added.

The study culminated in the publication of ACGRP’s monograph, “Ruffed Grouse Population Ecology in the Appalachian Region” in Wildlife Monographs. The report was awarded the Wildlife Society’s Outstanding Publication in Wildlife Ecology and Management in the Monograph Category in 2008. Since then, approximately 30 articles have been published from the cooperative work.

ACGRP is also in the production phase of a book about their study, edited by Stauffer. “One of our goals was to write a book that was more for the common reader, somebody just interested in grouse, less technical for individuals interested in grouse ecology and management,” Stauffer said. ACGRP expects the book to be published in late winter or early spring.