Hope in the Colombian Coalfields: A Lesson For Appalachia? 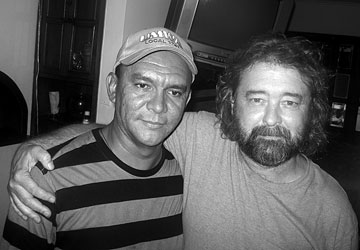 airo Delgado, the union president for SINTRACARBON and Mickey McCoy, Kentuckians for the Commonwealth member.

This article is the last in a series about a trip organized by Witness for Peace to the coalfields of Colombia, South America for people in the Appalachian coalfields and other parts of the U.S.

Last month, I wrote about the dangerous working conditions of the La Loma mine, and the huge obstacles that the local union faced in attempting to organize, including the open assassination of its labor leaders. In this issue, I want to talk about the other major coal mine in the country—the Cerrejón mine, owned by a consortium of multi-nationals—and its more positive experiences with unionizing.

Working conditions at the Cerrejón mine—located in the northeast region of Colombia—are significantly better than they are at La Loma mine. A job at the Cerrejón mine is actually decent by Colombian standards. Workers enjoy a strong union, health benefits, and pensions. Subcontracted workers, however, are not covered by union contract, and their jobs are often lower-paid with allegations of abuses.

Our delegation was able to meet with Freddy Lozano and Jairo Delgado, leaders for SINTRACARBON, the union at Cerrejón. SINTRACARBON is currently working with the subcontractors to get SINTRAS—the second union that the subcontractors have formed—recognized by SOTRANS, the transport company serving the mine. Lozano and Delgado have employed methods such as mobilizations, marches, and meetings with several work groups at Cerrejón.

SINTRACARBON has not only worked to get subcontractors the rights they deserve, the union strongly identifies with the struggle of the indigenous and Afro-Colombian communities that are being mistreated by Cerrejón. SINTRACARBON has even attempted to negotiate benefits for the communities impacted by the mines, such as a share of tax revenues and royalties collected by the government.

Lozano and Delgado believe that their struggle for better conditions is tied to the struggle of working people all across the world. In their spare time, the two leaders advise people affected by the mine’s social or environmental impact about their rights and support them in negotiations with the authorities. They allow local communities access to their offices to meet and to use their office equipment.
One witness on the tour, Willa Johnson from eastern Kentucky, was deeply moved by their ideas. 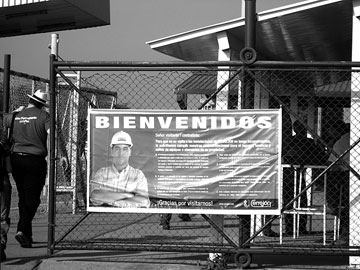 The entrance to the Cerrejón mine. Photos by Sandra Diaz.

“There was so much passion, hope and poetry when they spoke that I wished so badly that our miners still had that source of power in Kentucky,” Johnson said.
The union leaders of the Cerrejón mine were inspiring for Johnson because their spirit reminded her of her grandfather in his younger days. He, too, was a proud union leader in the coalfields of eastern Kentucky. Johnson hopes to organize a letter exchange between retired union miners from eastern Kentucky and the union leaders from the Cerrejón mine.

“Maybe the Colombian union miners can learn something from the history lessons my grandfather has to share, while my grandfather can see that there are still strong union coal miners out there,” she said.

It’s an example of the power that unions can exert not only for themselves, but also for their community and the others that their industry impacts, such as subcontractors and local communities.

It left me to wonder what the possibilities might be if coalfield communities and United Mine Workers in Appalachia came together to work for better conditions for all parties involved. 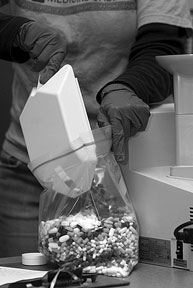 Thousands of pills and liquid medications were collected for safe destruction. Photos by Holt Menzies, courtesy of The Appalachian newspaper

Approximately 40,000 pills, 12 gallons of liquid medication, 2,000 sharps-needles, syringes and lancets, and a glucose meter were collected, filling more than one and a half 55-gallon drums with drugs.

“I feel it was a great success and it will probably be an annual event now that we see the outcome,” said Toby Ragan, a Boone patrol officer.

The medicines were collected and safely destroyed, effectively keeping them out of the region’s water systems and out of children’s hands.

“For the High Country to create such an event is a real testament to our commitment to a healthier environment and a safer community,” said Crystal Simmons, a volunteer at Operation Medicine Cabinet. “I give kudos to all the volunteers that helped make this event happen, and to the people that turned out to responsibly dispose of unused pharmaceuticals.” 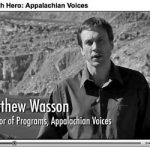 Appalachian Voices and iLoveMountains.org are trying to save the world, one Google Earth widget at a time.

“We are thrilled by the fact that hundreds of millions of people around the world use Google Earth to discover, explore, and learn,” said Google Earth Outreach. “But perhaps we’re even more proud of the fact that many people have used Google Earth as a tool to help them change the world; ordinary people achieving extraordinary goals with the help of Google Earth.”

The film salutes Appalachian Voices’ mission to end mountaintop removal in a behind-the-scenes story highlighting iLoveMountains.org, one of the first platforms to make extensive use of Google Earth as an educational tool.

“The real heroes are the people in Appalachian coal mining communities who are literally putting their lives on the line to speak out against the devastation of their mountains,” said Matt Wasson, Appalachian Voices’ Director of Programs. “At Appalachian Voices, we have the remarkable privilege to work with those people and to help broadcast their stories to the world — and Google Earth and Google Maps are some of the most effective tools we’ve ever found to do that.”

Appalachian Treasures Takes the AV Message On the Road Again

Appalachian Treasures is on the road again—this time to the desert Southwest.

The Appalachian Treasures project, started in March 2005, is a national campaign to bring an end to mountaintop removal. On each tour, Appalachian Voices sends out a field organizer, accompanied by volunteers from Appalachia’s coalfields. Recently, Austin Hall, Appalachian Voices’ North Carolina field organizer, traveled the western plains with Mickey McCoy from Kentucky, giving presentations at places such as rotary clubs, universities, churches and political organizations to educate about mountaintop removal.

“It’s about one person talking to another person,” said Lenny Kohm, campaign director at Appalachian Voices. “It is a personal way to talk about mountaintop removal because it engages people and allows them to share in our concerns.”

The tour has been to nearly every state, building a national network of people who will work together to end mountaintop removal.

“This is a unique opportunity for people to hear what it is like to live under mountaintop removal and also for people in the coalfields to get to hear people concerned about it,” Kohm said. “It is empowering for both sides.”

The tour is also an opportunity to talk to people across the nation about two bills currently in Congress. The Clean Water Protection Act (H.R. 1310) in the U.S. House of Representatives and the Appalachian Restoration Act (S. 696) in the U.S. Senate would amend the Clean Water Act to protect waterways from valley fills associated with mountaintop removal.

Thus far, Appalachian Voices has signed 160 cosponsors in the U.S. House of Representatives and 8 in the U.S. Senate. The Appalachian Treasures tour has been in every district and state where there is a cosponsor.

To find out more about the Appalachian Treasures tour, click to AppVoices.org/apptreasures.