On June 1, more than a dozen Kingston coal ash workers and their families showed up at the Tennessee Supreme Court in Nashville. With them was an incredible showing of faith, labor and environmental justice advocates, many of whom had traveled from across the state after participating in solidarity events in advance of the hearing.

The group gathered in the lobby for a prayer led by the Rev. Gordon Myers of Memphis. There in spirit were many other workers’ families who were too sick or otherwise unable to attend. Together, they filled every seat of the Tennessee Supreme Courtroom.

Standing room only in the Tennessee Supreme Courtroom. Photo by Kent Minault

They were there to watch attorneys argue over an appeal that threatens the workers’ ability to seek financial claims for the injuries they sustained while cleaning up toxic coal ash near the Kingston Fossil Plant.

Workers allege that during the six-year cleanup of the Kingston spill, supervisors told them they could eat a pound of coal ash a day without harm. Supervisors even destroyed respirators and masks that their employees brought to the work site. Since the Kingston coal ash spill in 2008, which was the largest industrial disaster in US history, nearly 60 workers have died and hundreds more are sick.

Sign the workers’ petition demanding that TVA provide the healthcare coverage it promised!

On one side of the courtroom was counsel for Jacobs Engineering, the contractor hired by the Tennessee Valley Authority to lead the years-long cleanup that involved more than 900 workers. Jacobs has already been found guilty by a federal court of failure to exercise reasonable care in keeping the workers safe.

This hearing dealt with one of the contractor’s recent appeals — Jacobs’ claim that the Kingston workers should have to prove silica-specific injuries like pulmonary fibrosis in order to seek damages because of a state law called the Tennessee Silica Claims Priorities Act.

The workers’ counsel argued that because their clients were seeking claims for injuries caused by other harmful coal-ash constituents such as mercury, arsenic and lead, the TSCPA should not apply. Though the five Supreme Court justices asked discerning questions during the hearing, a ruling is not expected for weeks or even months.

Waiting is something the workers and their community allies have become accustomed to, but never has it been done idly.

Organizations and community members from across Tennessee stood in solidarity with the Kingston Coal Ash Workers and their families during a state supreme Court Hearing on June 1st. Educator, activist and organizer Fran Ansley (narrator) made a powerful opening statement at a solidarity action held for the Workers in Knoxville on May 31st. Video by Robert Winslow with Southern Dialogues

In December 2018, the 10th anniversary of the Kingston Coal Ash Spill and one month after Jacobs had been found guilty by a federal court, TVA placed an ad in the Roane County News describing events after Kingston as a “Legacy of Promises Kept” and included contractors in their thanks for the work on the cleanup.

At that time, the workers and their families had endured years of doctors appointments and bills, court dates and pending attorneys’ fees. Since then, they have suffered unimaginable losses of loved ones in their journey for justice and accountability for their mistreatment during the clean up.

Listen to a Kingston worker’s wife tell her family’s story about the clean up (time: 18:15) during a Facebook Live Kingston solidarity event.

While juggling these enormous challenges, families and advocates have organized memorial events, healthcare funds, rallies and newspaper ads in honor of the workers, and have demanded that TVA provide the healthcare coverage it promised to the workers back in 2009.

Looking back, some folks say that the reason the workers weren’t protected after Kingston was because of a financial calculation that determined the workers and their families were expendable, that someone, or some people, decided that providing workers with full protective equipment would incite fear and lawsuits from the public, and that worker safety wasn’t worth that cost. 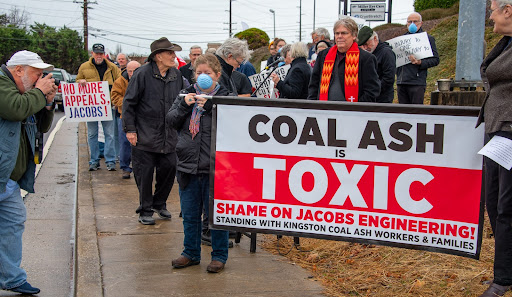 Rally outside of Jacobs Engineering in Knoxville in December 2019. To the left of the photo in the brown hat is the late John Stewart, a former TVA employee and unyielding advocate for the Kingston workers. Photo by Todd Waterman

Today, coal ash workers and communities in Tennessee know that our collective safety won’t happen without solidarity and looking out for each other. We want coal ash communities in other states to know that the same is true for them.

Along Lake Michigan, locals are concerned that if Northern Indiana Public Service Company moves forward with its plan to leave its coal ash in place, a leaking seawall could rupture and release 2 million tons of coal ash into the lake and a nearby creek.

In Tennessee, local communities who rescued the Memphis Sand Aquifer from TVA’s leaking coal ash at the Allen Fossil Plant are now fighting a backroom decision to truck that ash through an environmental justice community to a nearby landfill.

Coal plants across the country are closing, and a huge component of that transition is deciding how to permanently store coal ash and what steps will be taken to protect workers and communities as the toxic ash is excavated and moved out of water tables and flood zones to drier locations.

If the Tennessee Supreme Court rules in favor of Jacobs, none of the Kingston workers involved in the lawsuit will be compensated for their years of medical bills, funeral costs and suffering. 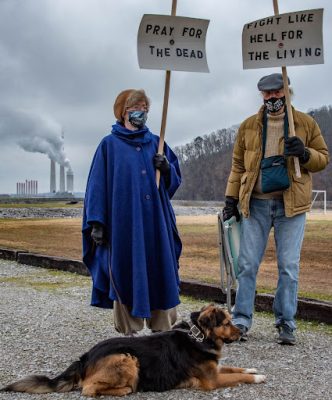 Advocates hold signs at a memorial event for the workers in December 2020. The Kingston Fossil Plan can be seen operating in the background. Photo by Todd Waterman

Such a ruling could embolden companies across the country to neglect coal ash worker safety, and would also set a negative precedent for future coal ash injury cases among workers and community members in Tennessee. So much hinges on this ruling for the workers — the awaited outcome can’t be taken lightly.

Still, as advocates, friends and loved ones, we won’t give up on justice for the first responders at Kingston.

Please share this article with the hashtag #RememberKingston, and demand justice for the Kingston coal ash workers.