A Spirit of Service in the Mountains 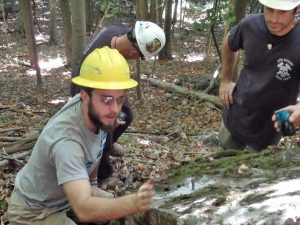 Davis Wax working with a crew maintaining the Appalachian Trail

Davis Wax can be a hard man to find — if he isn’t spending a week camped along the Appalachian Trail guiding volunteers through trail-repair projects, he’s likely off on mountain adventures. A former editorial intern with The Appalachian Voice, Davis is as comfortable writing an article about electricity transmission as he is teaching diverse groups of new volunteers the ins and outs of trail building.

A native of Concord, N.C., Davis studied professional writing at Appalachian State University in Boone, where he explored the mountains and trails in his backyard. Midway through college, his connection to Appalachia deepened when he began to volunteer with regional organizations.

He joined fellow volunteers with the Appalachian Trail Conservancy for a week of camping and outdoor work, and witnessed how people from all walks of life share a need to contribute to causes they care about. “[People] need to get some volunteer work in, not expecting to have any kind of reward but just doing it because they feel like it’s the right thing to do or they want a new experience,” he says.

While in college Davis also joined an Appalachian State University fall break trip to Williamson, W.Va. He helped build community garden structures with the local initiative Sustainable Williamson, and learned about efforts to move past the problems associated with coal and build a more diverse economy. He wanted to stay engaged with these issues upon returning to campus, and contacted Appalachian Voices.

During his internship with us, Davis wrote about topics ranging from the population health of game species to distributed electricity generation, and helped our water quality teams with phone-banking events. He also wrote our inaugural Member Spotlight columns, and was touched by the inspiring personal stories of the members he interviewed.

According to Davis, writing for The Appalachian Voice and building trails taught him to appreciate the teamwork and behind-the-scenes effort involved in journalism and trail maintenance. “Whether you have one little story or one part of the trail you’re working on, it’s really nice to see it all come together at the end,” he says.

Davis recalls staffing an Appalachian Voices table at a local event and talking with people who were unfamiliar with mountaintop removal coal mining, a destructive form of mining that involves blasting mountains to access coal and filling valleys with the leftovers. “It was kind of astounding to be at that moment, where … you’re putting that thought into their head,” he says, adding that solving pressing problems begins with raising awareness. “I like to think that every member is doing a little bit to help, so I’m happy to be part of that process.”

Davis is an assistant crew leader for the Rocky Top Trail Crew and a freelance writer, as well as an Appalachian Voices Mountain Protector monthly supporter. Read his account of trail repair in the Smokies here.