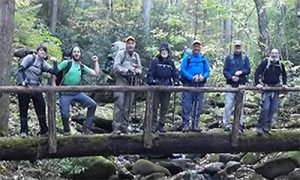 Leaving I-40 South near Newport, Tenn., heading down Cosby Highway, I slowed down and leaned forward over the steering wheel, watching as the late September sky disappeared behind undulations of green and blue earth. The Great Smoky Mountains loomed ahead, as did my next adventure on the Appalachian Trail, a footpath — and a community — from which I could not seem to get away.

I was fast becoming a roaming trail-maintenance volunteer, finding myself all across the East Coast during the past month to work on the A.T. After one week in Virginia with the Konnarock Trail Crew and three weeks with the Mid-Atlantic Trail Crew in Pennsylvania and New York, I was now back south to join another crew. I had discovered a hidden ecosystem of trail repairers — member hiking clubs and trail crews operating through the Appalachian Trail Conservancy, a nonprofit founded in the 1920s to oversee the footpath’s completion.

Rocky Top Trail Crew was born from a need to repair a 35-mile portion of the A.T. in the Smokies that is open to equestrian use. The trail conservancy and the Back Country Horsemen of Tennessee and North Carolina work together to get tools and supplies up to the work site in the national park each season.

Before reaching Gatlinburg, I turned off the highway and made my way to basecamp. I was reminded of one of the great benefits of this kind of work — meeting people from all walks of life. Altogether, I shook the hands of Tennesseans, Floridians, North Carolinians and one young English lady currently living in Singapore. With familiarity and ease, we were bonded by our volunteerism and desire to learn about trail building.

To get to the A.T. in the park we hiked up Snake Den Ridge Trail. Pack horses passed us, panniers secure on either side and their volunteer riders upright and cheery in the cool rain of the morning. We stuck together as a crew, gaining almost 2,500 feet in elevation over six miles. Our pace was slow but steady, and ultimately invigorating since I knew rewarding work lay ahead.

Waking up in the morning dark at an elevation of 5,800 feet, we took our breakfast. Carefully we reengaged the electric bear fence surrounding the kitchen and then hiked to the work site.

Part of the team was tasked with building log steps where the trail grade was steep. Locust logs, more resistant to rot than other hardwoods, had been flown in by helicopter to nearby clearings, where the steps and stakes to hold them in place were cut to size.

Ease-of-hiking is actually not the first concern when restoring a trail. Controlling water erosion is the top priority, which reduces routine maintenance and, if done well, also makes the trail safer and easier for hikers to navigate. Thus, the three tiers of trail maintenance: erosion, safety and hikers’ ease.

I was thrilled to see that at the end of the season there were returning alumni from Rocky Top and other crews. Perhaps most special of all was the participation of 88-year-old Keith Brown, a legend in the trail-building world from Ohio. To work alongside this man with more than twenty years of experience in trail maintenance work was an honor.

Late October was here, showing itself one morning when we woke up to 16 degrees. One night I heard a light pattering on my tent. We were greeted that day with about a half-inch of snow.

On the day before the “Great Pack-Out,” we stopped working early enough to cache tools at the lower trail junction. The next morning we broke down camp and carried everything down to the junction in order to meet the caravan of volunteer horsemen. Using a hook scale, we created pairs of loads which would be balanced for the horses.

Seeing the horses come up the narrow mountain trail, calm and controlled, was majestic. We helped the volunteer horsemen fasten the panniers and descended down the mountain, leaving the trail much the same to the untrained eye. In a few short winter months, next spring’s hikers would be hitting the trail, whether going for a day or two or all the way to Maine. I was humbled by our work with the rock and soil, knowing we had lent those future trekkers a small helping hand for their journey.