Who Cleans Up Coal’s Current Mess?

Appalachian Voices staff and partners joined the Virginia Department of Mines, Minerals and Energy to inspect reclamation progress at an A&G Coal Corporation mine in February 2021.

The Surface Mining Control and Reclamation Act, passed in 1977, was supposed to make sure that coal companies were held responsible for reclaiming mined land and cleaning up polluted water. Unfortunately the law has many shortcomings, and problems with mine reclamation have persisted since its passage.

Today, with the industry in widespread decline, these shortcomings are becoming even more obvious. The systems designed to hold coal companies accountable for their post-mining mess are failing, leaving billions of dollars in environmental cleanup hanging in the balance. 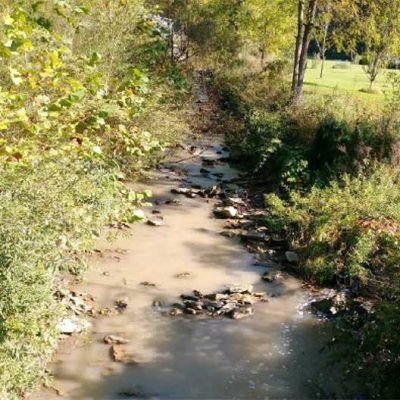 Following the 2019 bankruptcy of the mine’s owner, Blackjewel LLC, two companies seeking to buy other Blackjewel mines ended up in a dispute over which company owned this and 21 other sites, with both companies attempting to deny ownership and responsibility for reclamation.

The problems with the mine reclamation bonding system

Under federal surface mining law, a coal company must post a bond, or put money into a secured account for post-mining cleanup, for each mine permit they hold. The bond can take different forms, but the main purpose is to ensure available funding for reclamation if the company goes bankrupt or fails to fulfill its obligation to clean up the mine site.

The bond, intended to provide an incentive for reclaiming the site, is released in three phases as the company reaches certain benchmarks for repairing the site. Not only does the quality of cleanup vary greatly, there are also problems with the bonding system in general.

First, the dollar amount of the bonds is not always enough to actually reclaim the land to begin with.

This is especially true for mines with long-term, expensive water pollution issues like acid mine drainage. When a coal company fails to reclaim a site and the state uses its enforcement powers to seize the company’s bond (a process known as bond forfeiture), the state still might not have enough money to clean up the land and water and remove safety hazards. The law empowers regulators to pursue additional funding directly from a bond-forfeited company, but doing so is time-consuming and legally complex. Ultimately, taxpayers may be at risk of covering the cleanup cost.

Second, many states rely on a method called pool-bonding.

This kind of bonding allows companies to pay their fees into a common pot with other mining companies for a fraction of the normal bond cost. In the event of a forfeiture, any shortfall is made up by the fees paid by the other companies into a state pool.

This system assumes that there will be enough money in the pool for state agencies to draw from if needed, but is ultimately not set up to cover widespread bankruptcy of large companies like the region has experienced in recent years. Companies that declare bankruptcy or fail to make timely reclamation progress are threatening the strength of these pool bonds in Kentucky, Virginia and West Virginia.

Self-bonding allows a mine operator to get a mining permit essentially just by claiming they are capable of covering the cost of mine reclamation, without actually transferring any cash into a secured account. Several states got rid of self-bonding after a wave of bankruptcies in 2015. Virginia is now the only state in Appalachia where self-bonding is an issue. Although Virginia outlawed this practice in 2014, self-bonds are still in effect for 20 permits in the state that are held by the family of West Virginia Governor Jim Justice.

Fourth, the ongoing wave of coal industry bankruptcies is worsening the situation.

As coal companies go bankrupt, some are forfeiting their bonds. Due to the problems with bonding listed above, this means that sites may be unreclaimed for a long period of time, posing safety and environmental risks to nearby communities. And when cleanup does take place, taxpayers may be left to pick up the tab.

The Surface Mine Control and Reclamation Act was built on the assumption that coal companies would comply with requirements to clean up post-mined sites in order to keep their existing mining permits and receive new ones. But now countless coal companies are bankrupt and the remaining coal operators are facing a national energy economy that is moving past coal. Executives see little incentive to follow the law, particularly when bankruptcy court offers them a way to keep their personal cash and avoid paying workers or covering the costs of retiree benefits and environmental cleanup.

Largely through federal oversight and pressure from local communities, some states have attempted to strengthen bonding programs. But it may be too little, too late. As coal companies continue to declare bankruptcy, these insecure funding sources mean that even more mines may be at risk of abandonment.