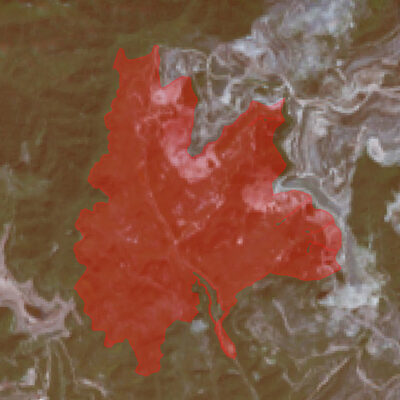 A land satellite image of the Straight Fork Surface Mine, with the mine permit shown in red, taken in September 2019.

Mining companies owned by West Virginia Governor Jim Justice and his family have violated environmental standards and failed to pay fines, fees, and taxes in Virginia for many years. New developments in this long-running pattern occurred on Jan. 27, when the state’s Department of Mines, Minerals, and Energy (DMME) issued notices of bond forfeiture and permit revocation on two coal mines held by two different Justice family companies.

Federal law requires coal companies to post bonds for mining permits so that the state has funds available to reclaim the mine sites if the company fails to do so. Bond forfeiture, which is when the state orders a company to hand over its bond, and permit revocation are the most severe enforcement actions available to regulators.

Virginia regulators revoked the War Creek Mine’s permit after the company failed to address environmental and public safety violations dating back to September of 2019. The problems stem from a flooded open mine pit, an uncontrolled leak of toxic-forming materials, and for nonpayment of civil penalties associated with these violations. The Straight Fork Mine’s permit revocation resulted from A&G Coal Corporation’s failure to comply with administrative requirements, and nonpayment of fees and civil penalties over the course of 6 months.

After these enforcement actions were taken, the companies requested administrative review of the revocations and bond forfeiture determinations for both permits. Additionally A&G Coal has taken the necessary steps required to correct the administrative and nonpayment violations on the Straight Fork Surface Mine, so the DMME has reinstated the permit, vacated the bond forfeiture determination, and terminated the underlying violations. Finalization of forfeiture on the War Creek Deep Mine could be averted if Black River Coal submits a satisfactory plan to the DMME to address outstanding environmental and public safety violations.

The Straight Fork Surface Mine is self-bonded, a practice by which a coal company avoids posting a real cost or third-party surety bond, and instead simply submits information assuring regulators that they’re in good shape financially. This means that no actual money is immediately available to the state of Virginia to perform environmental cleanup and reclamation of this nearly 1,800-acre mountaintop removal mine. To seize the self-bonded amount, DMME would likely have to pursue civil litigation against A&G Coal Corporation, and/or Jim Justice and his family members directly. (Again, this scenario has been averted at this time, as the permit revocation and determination of bond forfeiture seems to have compelled the Justice family to pay the overdue debts associated with this mine.)

Virginia outlawed self-bonding in 2014, but the law is not considered to be retroactive, and 20 A&G Coal Corporation permits remain self-bonded. These are the only self-bonds in the state of Virginia.

While coal companies’ use of self-bonding jeopardizes reclamation of mines, a similar scheme allows companies to evade insurance payments that are needed to secure black lung benefits for coal miners suffering from the fatal occupational disease when those companies go bankrupt. Read more about this practice, simply called self-insurance, on the Front Porch Blog.

It is possible that the revocation and bond forfeiture on the War Creek Deep Mine will be upheld after the administrative review process. But past dealings between Justice family companies and the DMME suggest that this outcome may be unlikely. Since January of 2014, 13 chronically non-compliant Justice family permits (including the Straight Fork Surface Mine, and other self-bonded permits) have been subject to a compliance schedule, agreed upon by Justice companies and the DMME.

The deadlines in this agreement have been extended many times, effectively allowing for sluggish compliance on a few permits, while some violations have gone unaddressed altogether for 6 years. When this blog was published in early March, four Justice permits (#1101905, #1101824, #1102052, and #1102059) with combined disturbance of 2,172 acres were in violation of the current deadlines spelled out in the agreement. One of these permits, Dickenson County’s Baden Surface Mine (permit # 1101953), was issued a show cause order by the DMME on February 12.

A show cause order informs a mine operator that a permit is in jeopardy unless the operator takes immediate actions to address issues of non-compliance. The Baden Mine’s show cause resulted from the company failing to remediate violations for inadequate drainage structures that were first issued in 2018. On March 2, company officials requested that the DMME grant an administrative review of this enforcement action. The company also stated that they had resumed reclamation on the permit in February, shortly after the DMME issued the show cause order and just over two years after the agency first noted the underlying violations.

For related stories about mine reclamation in Appalachia, read The Impacts of Coal Bankruptcies in the Spring 2020 issue of The Appalachian Voice, and When Coal Companies Go Bankrupt, Who Cleans Up The Mess? in the Oct/Nov 2019 issue.