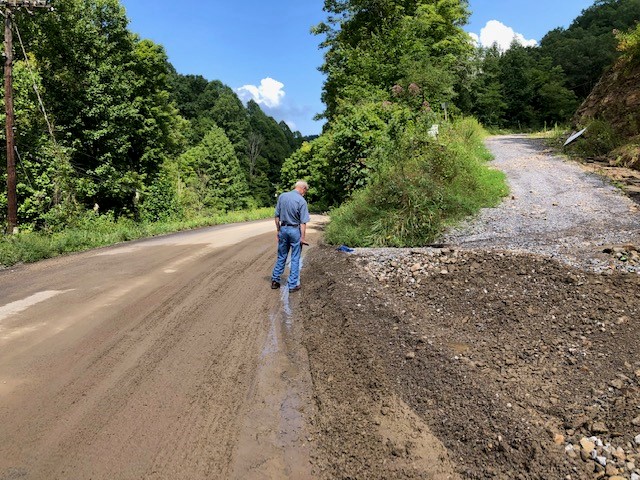 Heavy rains caused severe erosion of haul roads associated with a bond-forfeited coal mine in Russell County, Virginia, late last month. The erosion diverted water and sediment onto State Route 632, prompting regulators to declare an emergency. The Pine Creek Surface Mine #2 is permitted to Harold Keen Coal Company, a subsidiary of Blackjewel LLC, which is in the late stages of a messy bankruptcy that began in July 2019.

For several years prior to filing for bankruptcy, Blackjewel and its affiliate, Revelation Energy, had acquired hundreds of mines across Central Appalachia, many of which had high outstanding reclamation needs and little to no prospective productivity. Once the company began a liquidation process through bankruptcy, dozens of these mines have been unable to attract bidders. As these mines have largely languished, some state agencies have pursued bond forfeiture for some permits. Through this process, state regulators collect available bond money and assume direct responsibility for reclaiming the mine. The Pine Creek mine is one of several permits forfeited in Virginia through the Blackjewel bankruptcy. 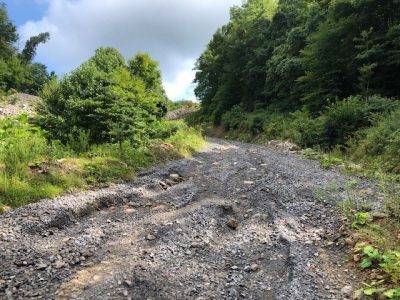 The mine access road for the former Harold Keen Coal Co. Mine. Photo courtesy of DMME

In a press release, the Virginia Department of Mines, Minerals, and Energy explained that it is unable to obtain the surety bond for the Pine Creek Mine due to Blackjewel’s ongoing bankruptcy proceedings. As a result, the agency has had to dip into the state’s bond forfeiture fund in order to pay a contractor $19,500 to stabilize the site and remove material from the road. This fund consists of all the monies collected from any bond forfeiture in the state. DMME hopes to obtain the bond for the Pine Creek Mine subsequent to ongoing court proceedings, at which point it will reimburse the cost of cleanup to the bond forfeiture fund.

The Pine Creek Mine was originally permitted in 2008 and allowed to participate in the state pool bond. Virginia uses two types of reclamation bonding: Full-cost bonding, where a third party, usually a surety company, guarantees a bond at the full cost of reclamation, and pool bonding, where only a portion of the reclamation cost is covered by a bond, and the rest is covered by a state pool fund. . To the credit of regulators, in 2018 the DMME required Harold Keen Coal Company to replace the mine’s original partial bond with a surety bond calculated at the full reclamation cost estimate (nearly $2.7 million).

The current problems the DMME is facing in obtaining the bond money for the Pine Creek Mines are concerning, as the bonding system is the key component of the federal law ensuring that mines get properly reclaimed and that coal companies are held accountable. If even third-party surety companies can avoid paying out bonds, there is essentially no way to guarantee the security of reclamation bonds. In this case, the DMME is currently using money provided through bonds meant for the reclamation of other coal mines. Though addressing emergency situations quickly is crucial, in this case, it may jeopardize reclamation at other sites, which could create similar problems elsewhere.

Heavy rainfalls over the Appalachian region are now a regular occurrence. A recent review of scientific literature by the National Oceanic and Atmospheric Administration concluded that climate change has led to hurricanes bringing more rainfall and that recent hurricanes have shown decreased speed over the continental U.S., which can cause a storm to drop considerable rain within a smaller area.

In such events, flash flooding is not uncommon due to the region’s steep terrain and narrow valleys. Large deforested areas such as mountaintop removal sites and other types of surface mining operations can exacerbate the problem. Inactive mines without proper runoff and sediment control structures—whether due to bankruptcy, bond forfeiture, or just neglect—are of particular concern.

According to data compiled by Appalachian Voices, there are currently more than 200 bond-forfeited coal mines stretching from West Virginia to Alabama. With large rainfall events likely to continue, regulators must move fast to seize bonds and stabilize these pillaged, neglected landscapes, in order to avoid more emergency situations like the one that unfolded at Blackjewel’s Russell County mine. Unfortunately, proper and safe reclamation can be all but impossible when bonds are insufficient due to decades of bad policy, and/or inaccessible due to drawn-out bankruptcies and litigation.

To address this growing problem, state mining agencies should make sure mines are full-cost bonded and insist that coal companies are completing proper reclamation now. Too many mines are idled and slowly deteriorating while waiting for a coal market recovery that will never come. The longer this problem is allowed to persist, the more consequences will be borne by communities living near these mines.