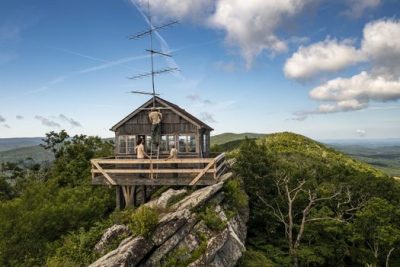 UNION, W.Va. — West Virginia researchers are utilizing old-school radio technology to study the migratory patterns of wildlife in remote areas of the state.

West Virginia’s Division of Natural Resources (DNR) recently installed a radio telemetry system at Hanging Rock Raptor Observatory in Monroe County, which collects data on migratory animals that pass in the vicinity of the tower.

The project is part of an international animal tracking network called Motus, and picks up the movement of any wildlife that has been radio-tagged.

Mack Frantz, state zoologist for the DNR, said the project will help answer ecology questions about rare or threatened species.

“There are also other animals we are interested in, such as the northern long-eared bat,” Frantz explained. “There happens to be large summer populations of the bat, but then in the fall when they migrate, we don’t know exactly where they go, so there’s just some basic questions like that we hope that when we start to put more towers online, that we’ll be able to answer.”

As part of the network, researchers will have access to data from other states and learn if a bird traveling from Pennsylvania, for example, is passing through West Virginia.

Frantz pointed out the data can help inform important areas of the state for conservation efforts.

Part of why the DNR chose Hanging Rock was a 50-year history of environmentalists tracking raptor migration there.

Frantz noted the group of volunteers has one of the longest data sets in the United States for raptor migration, and emphasized in collaboration with the group, the state will get to learn even more about raptor movements in West Virginia and beyond.

“We’ll be able to track those movements and know more specifically what kind of habitat they’re using and important areas in the landscape,” Frantz outlined. “And so we’ll have an additional layer of information that’s going to help us to be able to conserve these species.”

This story was originally published by Public News Service on Aug. 19, 2021.