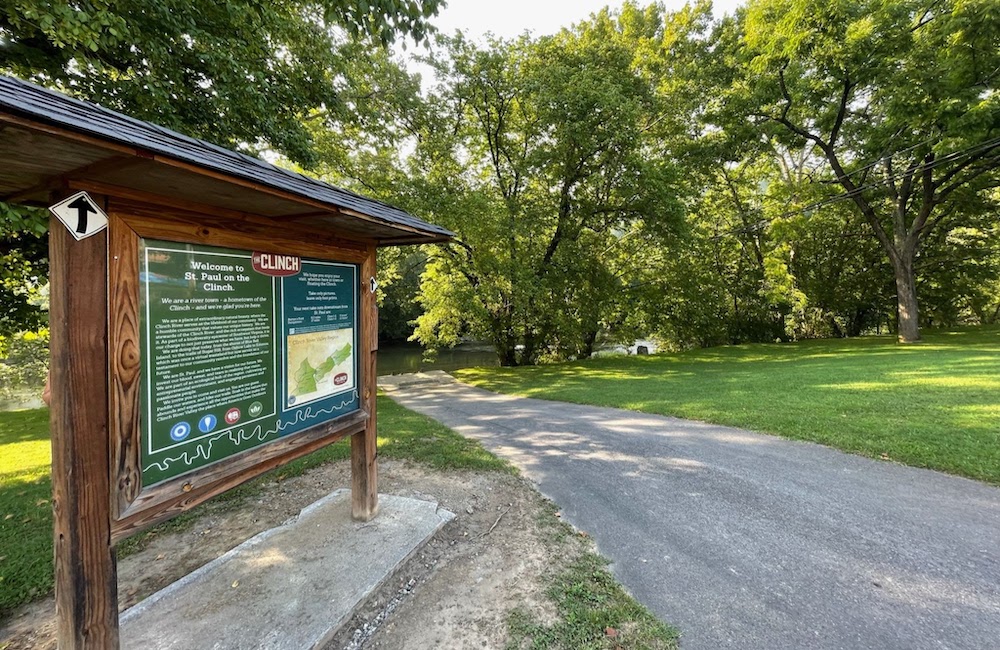 A sign with information about the park greets visitors in St. Paul. Photo courtesy of Idalina Walker

Southwest Virginia’s newest and most unique state park aims to protect a biodiversity treasure and educate visitors at the same time.

Aptly named after the river it is located on, the Clinch River State Park will be the state’s first blueway state park, with several smaller properties connected to the primary state park location by the river once the park is complete.

The state park, comprising 640 acres across its multiple properties, is considered a string of pearls on the river, as there will be entry points at various spots along the river. The park will provide people with access to hiking trails, river launch spots and camping areas, according to the Virginia Department of Conservation and Recreation’s website.

“The main purpose of the park is to bring awareness to biodiversity while offering resources and educational opportunities to the public,” Clinch River Project Manager Maddie Gordon with the Center for Natural Capital, a Virginia-based nonprofit, wrote in an email.

Also known as “Virginia’s Hidden River,” the Clinch River is a hotspot for biodiversity, Gordon wrote.

The Clinch River contains the highest concentration of rare and imperiled freshwater animals in the country, according to the Clinch River Valley Initiative, a collaboration that has supported the creation of the park. In particular, the river is home to mussels, minnows and darters. 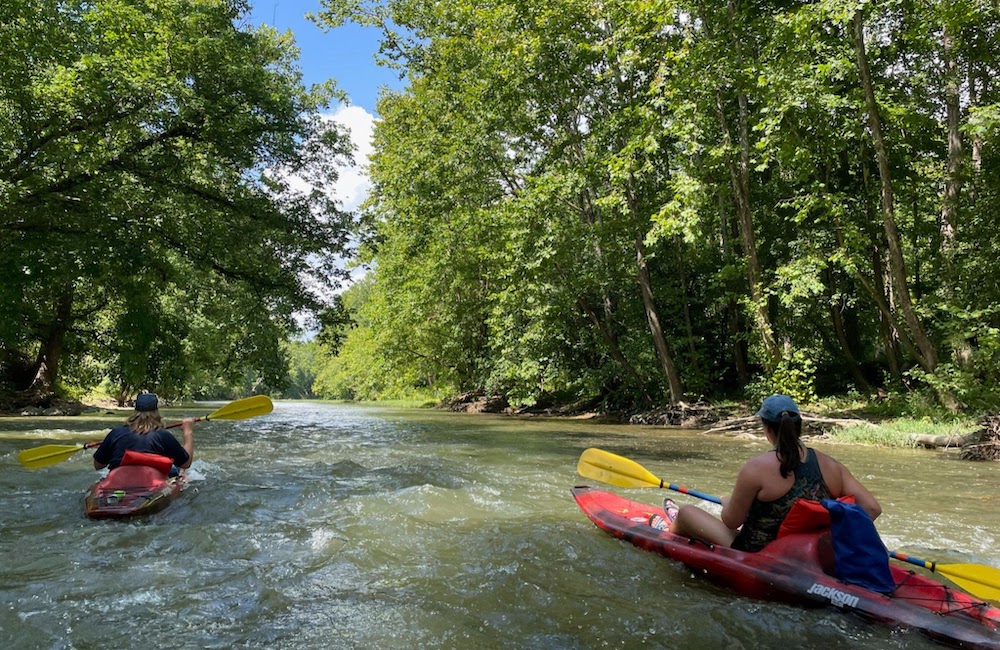 Paddlers of all levels can enjoy the Clinch River, though visitors should check each section for details before embarking as there are several named rapids. Photo courtesy of Idalina Walker

Though the park is still under development, visitors already have access to 8 miles of hiking trails, 2 miles of riverfronts, a picnic shelter and about 3.5 miles of mountain biking trails.

In addition to physical activities, Gordon says the park staff will aid in reduction of stream bank erosion and protect lands for wildlife preservation, as well as offer educational programs to inform the public of the area’s biodiversity.

There are no campgrounds, cabins or visitor centers available yet, according to Idalina Walker, Clinch River Valley Initiative facilitator and creative economy development specialist with Friends of Southwest Virginia.

Brad Kreps, Clinch Valley program director with nonprofit land conservation organization The Nature Conservancy, says he wants people to learn about and spend time on the river because local communities need economic diversification, and outdoor recreation is a part of that. 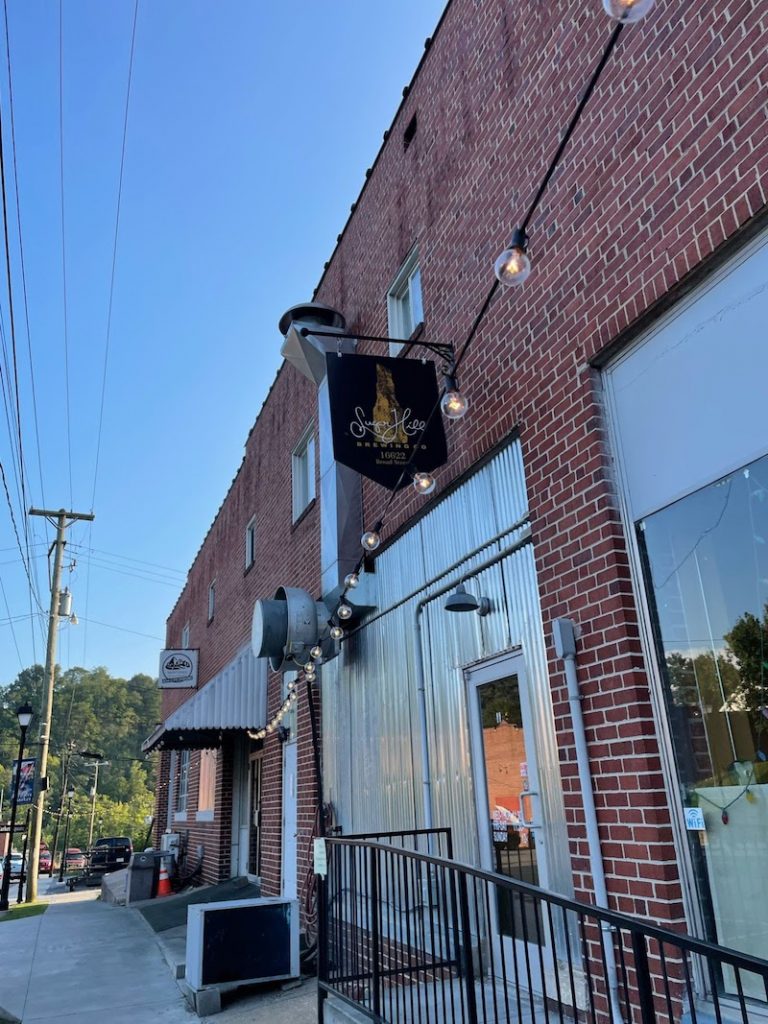 The concept of a Clinch River State Park began back in the ‘90s with the Virginia General Assembly, though the idea didn’t gain traction at first, according to Kreps. However, the idea was picked back up when the Clinch River Valley Initiative was formed in 2010.

The grassroots organization believed that a state park would be beneficial for Southwest Virginia. From there, they came up with the water trail concept in which, Kreps says, “you have multiple properties spread out along the river so that enjoyment of the river would be spread across multiple counties.”

After members of CRVI successfully took that water trail concept to local legislators, Kreps says a several-years-long process began of traveling regularly to Richmond to secure funding for the state park.

The park was officially opened to the public on June 16.

Kreps says the next phase of development is the master planning phase, in which the state park, over the course of 12 to 18 months, constructs a vision for the park by engaging stakeholders to see what they want in the park.

“We are in the early days,” Walker says. “Bringing this to fruition, to the dedication day took 10 years.”

Fly fishing guide Daniel Williams, based in St. Paul, Virginia, said his livelihood depends on the health of local ecosystems.

Williams states there is a national stereotype that people in Appalachia are poorly educated, but that he and his classmates received a good education and understand how ecosystems function — and the damage that pollution can cause. He adds that older generations in the region have not received that same education.

“It’s hard to get somebody who’s thrown every used tire and broken appliance in the river for 50 years to to see the Clinch River as a valuable asset,” Williams says. 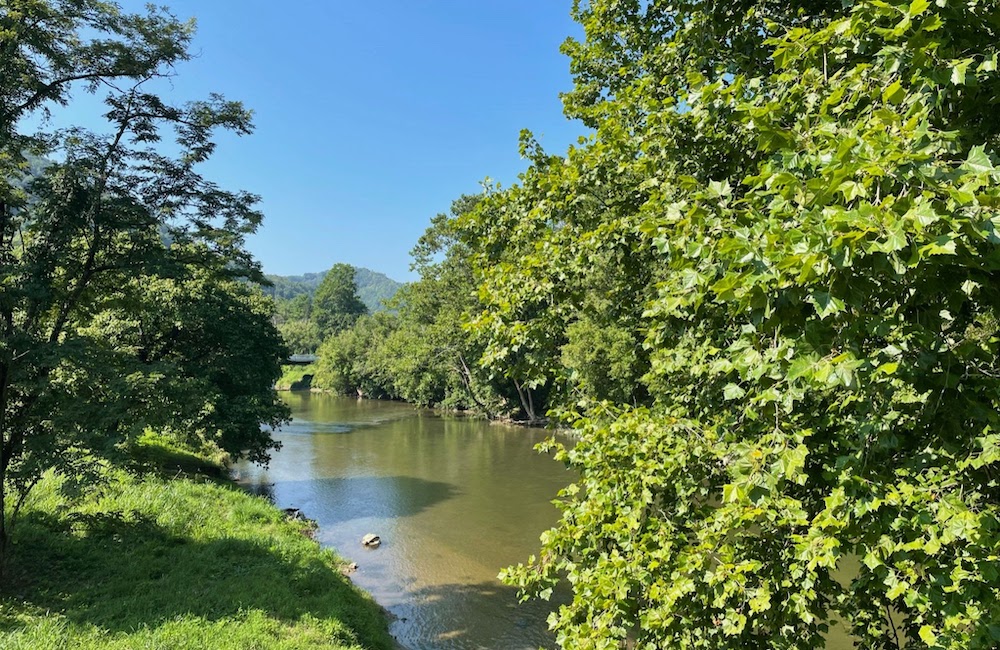 The Clinch River is typically clear, and much of the riverside is forested. Photo courtesy of Idalina Walker

Because of that, Williams stresses the importance of teaching people about conservation.

He adds that as the economic benefits of a healthy river become a reality to local people and they realize how many people want to come see the river, that “people take advantage of the resources that they have, and in the process of taking that ownership they care for the resource.”

Williams has seen many people come through the local outfitter shop that he works at that now carry trash bags with them when they go fishing.

In the guest book at the shop, Williams has seen an increase in tourism from places as far as California, Florida and Canada.

“A lot of people have worked very hard for many years to get to this moment,” Kreps says. “The local people that have really rallied to voice their desire for this park has been really special. That’s part of the story. It’s just a story of people coming together in Southwest Virginia to make this happen.”