Yurts and the Significance of a Circle 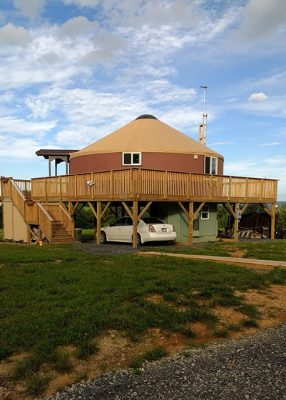 A yurt outfitted with a deck and carport. Photo courtesy of Blue Ridge Yurts.

Between HGTV’s “Tiny House Hunters” and other shows like “Tidying Up with Marie Kondo,” there has been a lot of talk about minimalism and smaller-scale living in recent years. One less-discussed alternative housing structure is a yurt. Less like a tent and more like a cabin, yurts are round structures made of a wooden lattice frame and covered in vinyl with a central domed roof.

Sharon Morley, co-owner of Blue Ridge Yurts, believes yurts to be a much better alternative to tiny homes.

“We get a lot of feedback from customers who’ve been shopping for tiny homes that our yurts are just so much nicer and often come at a fraction of the cost,” says Morley.

With prices generally ranging from $7,000 to $22,000, Morley says many people are surprised with how far their dollar can go. And while most yurts from Blue Ridge Yurts come with standard features like kiln-dried poplar lattice walls, spruce rafters and colorful vinyl covers, customers are able to customize their space to include special door frames, large awnings, the number and positioning of windows and fan supports, and even choose their own colors.

Morley and her business partner Kathy Anderson run Blue Ridge Yurts, a woman-owned and operated business in downtown Floyd, Virginia. Blue Ridge Yurts claims that it is the No. 1 supplier of yurts east of the Mississippi.

When asked how they got started, Anderson laughed, saying, “I always tell people it was Sharon’s idea, she’d gone out West and been inspired by the yurts she’d seen.”

Morley, a skilled woodworker, had been pressuring Anderson, her longtime friend and owner of a small sewing factory, to go into business together after Morley took a trip to Big Sur, California, where she experienced yurts for the first time.

“It was the perfect mesh,” Anderson said, describing their partnership. “She makes the frames and I make the covers.”

After the duo set up their first yurt in 2006 on Morley’s Christmas tree farm in nearby Craig County, Virginia, they fell in love with the process and they were in business later that year.

Since going into business, they have designed and manufactured hundreds of yurts in all different colors, sizes and layouts, sending them as far away as Maine and Nicaragua. 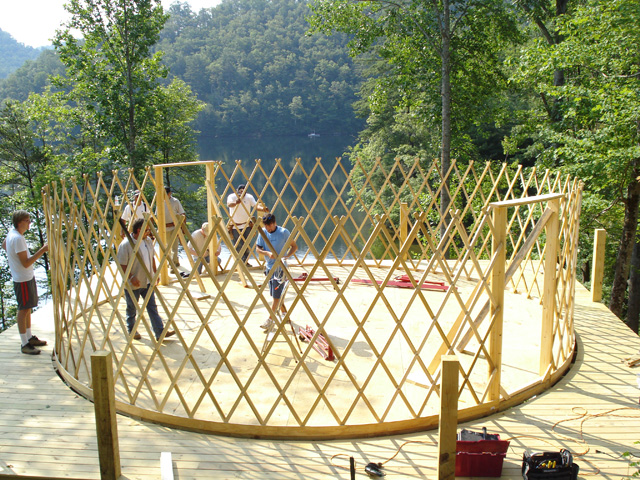 Yurts are much simper to put together than a conventional home, and the materials involved have a much smaller environmental footprint. Photo courtesy of Blue Ridge Yurts

While many small businesses around the country have been devastated in a year marred by COVID-19, Morley and Anderson have seen an uptick in both interest and in sales.

According to Morley, the majority of their clients are based in Appalachia, though recently the duo has been seeing increasing interest from outside the region.

“We’ve been getting lots of calls from New York, Massachusetts and Maine,” Anderson says. “People are looking for a piece of property where they can build a yurt so they have an alternative place to go.”

Lately, the shop owners are finding that many clients are looking for places they can spend large amounts of time during the pandemic.

“Some have mentioned they’re looking to secure spaces to spend time at during future pandemics,” Morley said.

On a 2020 earnings call, Richard Barton, the CEO of the real-estate listing site, Zillow, described the way people are beginning to relocate to homes and towns with more privacy and space as the “great reshuffling.”

Whether a yurt is serving as a back-up plan or a primary residence, they can present an opportunity to simplify one’s life.

Morley states that many people want to be encouraged to minimize their possessions.

With kit sizes ranging from 16 feet to 30 feet in diameter, the yurts Blue Ridge Yurts produces are much smaller than your average single family home.

“A lot of people ask if their yurts will be cold in the winter and hot in the summer,” says Morley. “I tell them they can heat and cool a yurt just like they would a traditional stick-built house.” 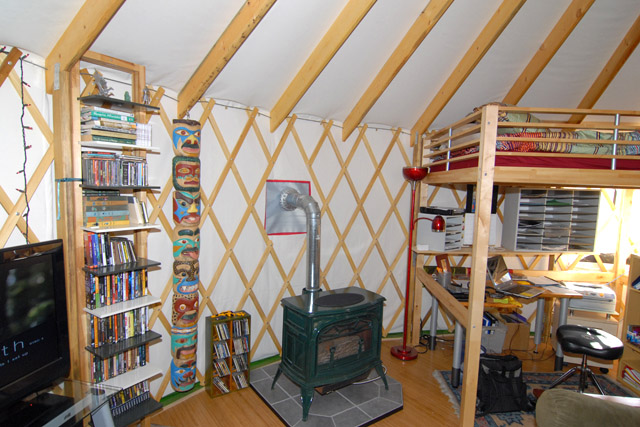 In addition to the insulation that comes standard with the yurt, Morley says that the majority of clients use a wood stove for heating, while others use mini split systems or propane.

Customers also ask how the yurt is able to hold up against snow in the winter. Anderson and Morley always reference the yurt-dotted ski resorts in Colorado as proof of their hardiness against the snow.

Another attractive benefit of yurts is their affordability.

“A lot of the younger couples don’t want to get under a 30-year mortgage,” Anderson says, describing the expense of traditionally built homes. “Yurt living is really attractive to that crowd.”

For the environmentally conscious crowd, one of the biggest advantages of living in a yurt is the ecological benefits.

“If you look at the amount of materials, like lumber, in a traditional house versus a yurt, the materials are minimal,” says Morley. “You can fit a 20-foot home on the back of an 8 foot pickup truck.”

“If you put one up and take it down, nature grows back and, four months later, you never knew it was there,” she adds.

And while many yurts serve as private residences, they have broader applications.

Erika Johnson, a longtime yurt owner and Morley’s daughter, has leveraged the creative potential for yurts. In addition to owning and renting out a handful of yurts for overnight guests, Johnson also runs her business from one. Revolution Juice, Johnson’s smoothie shop in downtown Floyd, Virginia, is run from a 16-foot wide red yurt with 7-foot high walls, yellow french doors and an “om” sign over the entryway.

Johnson describes the special considerations needed for running a business from a yurt, like getting proper permits, building the commercial kitchen up to code, and hooking up to town septic, as completely doable. 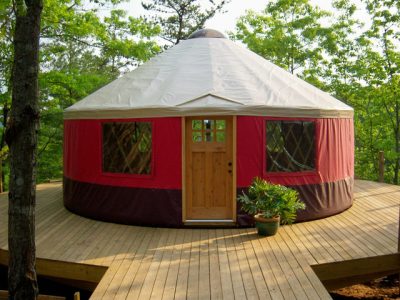 A colorful yurt on a deck. Photo courtesy of Blue Ridge Yurts

Similar to living in a yurt, operating a business out of one has unique advantages.

“The beauty of this space is that it doesn’t matter if we have a slow day or want to experiment with something and it doesn’t work,” says Johnson. “Our overhead is so low, which makes it easier to pivot and try new things.”

While many seeking to create businesses in traditional structures are forced to take on large loans, yurts soften the blow.

Outside of running her business in a yurt, Johnson lived in a 30-foot wide yurt with her two children for more than 10 years. She only left the yurt because it’s currently more profitable to rent it to yurt-curious tourists than live in it full-time.

“In a time when kids seem to be so disconnected from nature, I’m glad my kids had the opportunity to live in a yurt, just a few degrees away from nature,” Johnson says.

The yurt’s proximity to nature wasn’t the only thing natural about it, though. Johnson was also able to incorporate natural elements in the interior.

“I’m all about different textures,” Johnson says. “We used recycled materials to create a brick-lined staircase and old timber with axe marks to help hold up the loft.”

What’s more, Johnson states that the circular shape of a yurt holds a certain significance.

“When we meet in groups, we form a circle,” Johnson said. “There’s just something special about the shape of a circle.” 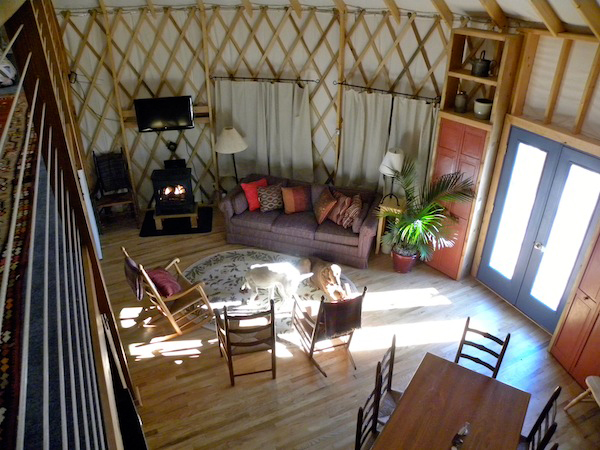