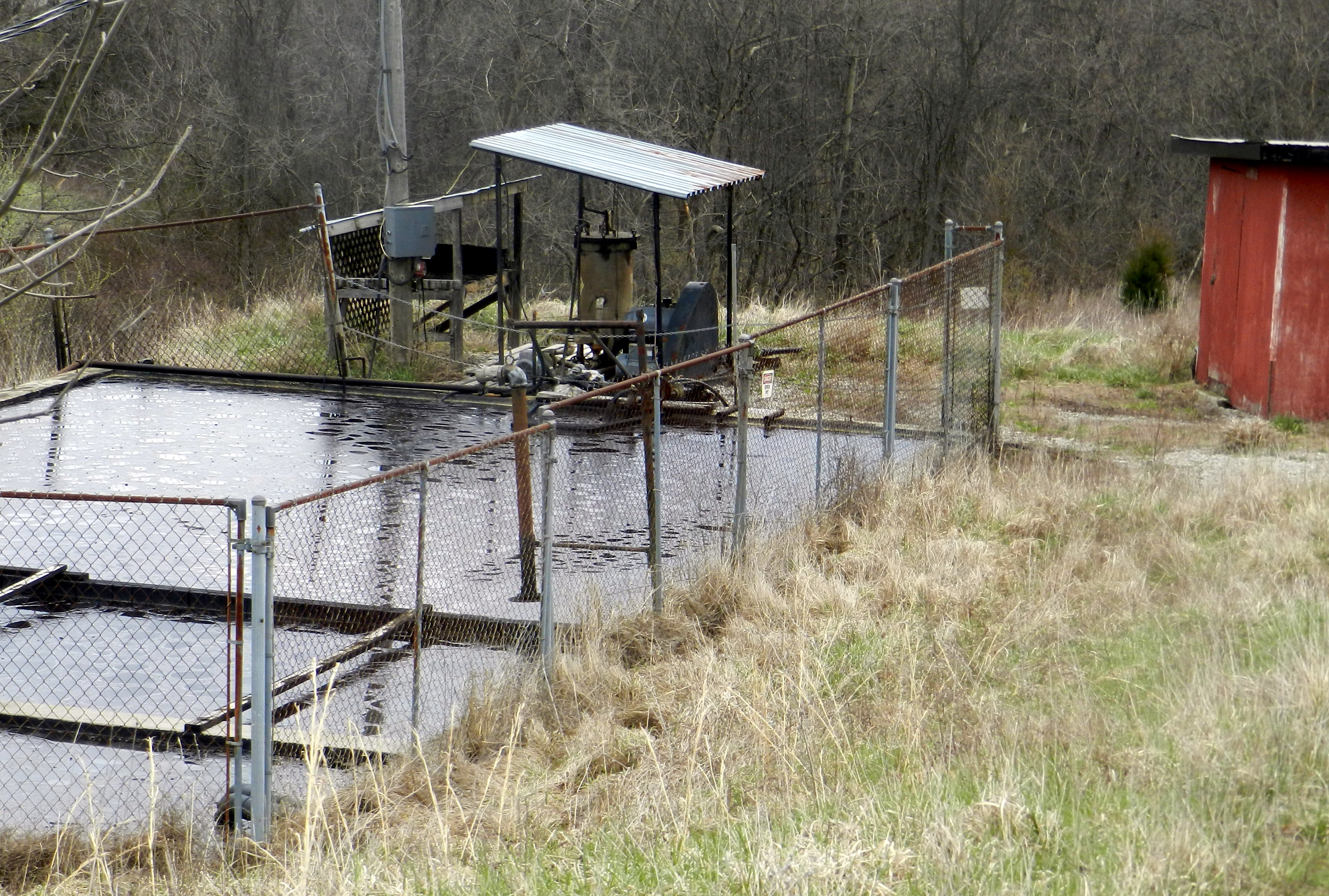 This photo of the full Ginsburg open storage pit was taken in May 2018. Photo by Roxanne Groff

Environmental activists are celebrating a small victory in their fight to protect Ohio communities from the dangers of toxic and radioactive waste stored in open-pit, fracking waste injection wells.

In May 2019, the Ohio Department of Natural Resources ordered Carper Well Services to clean up the waste in the Hazel-Ginsburg well, located on Ladd Ridge Road in Alexander Township in Athens County. The order enforced a law already in place to regulate open pit wells that had long been ignored. The company was given the choice to dismantle the well and plug it, or make it operational again. The company chose to dismantle it.

Open-pit wells use cement-lined pits to store toxic and radioactive waste fluids. Over time, sludge from the waste accumulates in the bottom of the pits. Open-pit wells were banned by the U.S. Environmental Protection Agency in 1984.

The Ginsburg well looked much like an outdoor swimming pool and sat on a well-traveled road flanked by farms and residences, with nothing but a three-sided chain link fence around it and a chain strung between two free standing posts between the toxic waste and the general public and wildlife. It had been idle since 2015.

Activists had reported seeing the pit full of waste to within an inch of the top and its cement liner deteriorating with cracks visible.

Carper Well Services began cleanup in July 2020, and an October report released by ODNR confirms the well has been permanently closed.

Noting that there is still work to be done, she adds, “[The Ginsburg well is] not plugged as yet and the company did not test the radium in the sludge as required by the state and ODNR claims they do not know where the radioactive material is sent.”

The Gisburg well, as it is more commonly known, is a Class IV injection well. Class IV injection wells consist of an open, cement-lined pit adjacent to a well head that stores and pumps hazardous and radioactive waste fluids at high pressure into or above underground sources of drinking water. The Ginsburg well injected millions of barrels of waste over more than 30 years.

Much of the waste disposed of in Ohio wells comes from surrounding states. Oil and gas companies have long taken advantage of Ohio’s minimal regulation and low disposal fees — 20 cents per barrel for out-of-state waste and 5 cents per barrel for in-state. Once a well reaches 500,000 barrels, companies can dump all subsequent waste for free. According to Groff, the Ginsburg well injected about 33,000,000 gallons, which is around 777,000 barrels.

The exact components of fracking fluids are unknown due to a clever use of patent law that allows the oil and gas industry to keep the ingredients a proprietary secret.

What is known about fracking waste fluids is that they can contain any of hundreds of toxic chemicals, heavy metals, corrosive salts and radioactive materials, many of which are carcinogenic and can cause genetic mutations or harm the central nervous system.

ODNR has long denied there is any danger to humans or the environment from the highly salinated waste fluid from conventional oil and gas wells, euphemistically called brine, or from fracking waste fluids.

According to information on the EPA’s website, more than 2 billion gallons of fluids associated with oil and natural gas production are injected underground in the United States every day.

There are six classes of injection wells regulated by the federal government. According to the EPA, in 2018 the agency’s Underground Injection Control program regulated more than 740,000 injection wells located in 50 states in addition to U.S. territories and tribal lands.

Out of these, the program monitored 122 Class IV wells in 2018. That number includes orphan wells — those that are no longer functioning but have not been dismantled and plugged — and those allowed under limited use regulations for injecting groundwater treated as part of environmental cleanup. Only 27 of the 122 were inspected in 2018, according to the EPA.

In the same year, the program issued more than 8,600 permits authorizing more than 14,000 wells of all classes to operate. 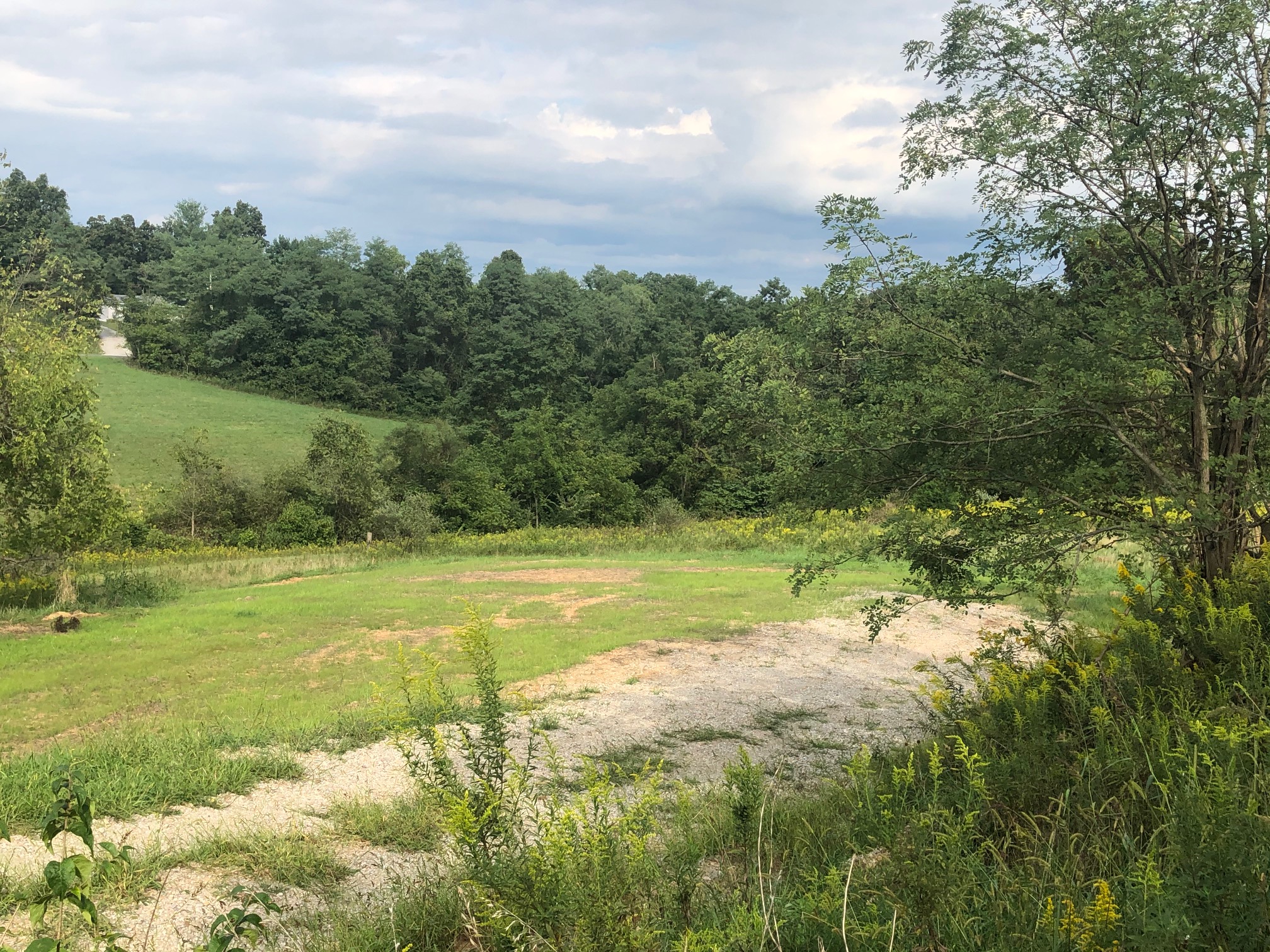 The Ginsburg well site is seen here after removal of the waste and cement pit, and after the area was filled in. Photo by Roxanne Groff

Roxanne Groff had fought for the cleanup of the Ginsburg well for more than 10 years. Her friend and the current executive director of Buckeye Environmental Network, Teresa Mills, had pursued it longer than that. The well’s record of violations prompted Groff to focus much of her effort on the Ginsburg.

“It was going to be shut down a couple of times and it just went from bad to worse,” explains Groff.

Other environmental groups, including Torch CAN DO and Appalachia Resist, also stepped up to the front lines on the Ginsburg well. In a widely publicized protest in 2012, a member of Appalachia Resist by the name of Madeline Ffitch blocked the driveway to the well site by chaining herself between two barrels.

“It was actually hilarious because they had helicopters flying in and state troopers,” says Groff. It was just ridiculous.”

A May 2019 meeting between Groff, Mills, Torch CAN DO Founder Felicia Mettler and ODNR Director Mary Mertz was key to the win. After the meeting, ODNR sent a letter to open-pit well owners in Ohio stating that all well owners must comply with Ohio laws to “submit a plan regarding the drainage and proper disposal of all saltwater and oil field wastes.”

A vital piece of the information that led to the order came from within ODNR itself.

When the incoming Ohio governor appointed Mertz as new head of ODNR in 2019, Groff requested the meeting with her to plead the case for closing the Ginsburg well. Armed with a large binder containing documents and photographs, Groff, Mettler and Mills laid out the hazards posed by open-pit wells and shared stories about the impact on families and communities.

Looking at a picture of Ginsburg’s nearly overflowing and deteriorating pit, Mertz asked a representative from the EPA who was also present, “How would you ever remove this material?”

“And he said, ‘Well,’ — and this is the first time I ever heard the words out of ODNR’s mouth — he said ‘It’s TENORM, technologically enhanced naturally occurring radioactive material,’” Groff says.

“It was the first time I’d ever heard anybody from ODNR even use the word ‘radioactive,’” she continues. “He said the pit was full of it and Mary Mertz’s eyebrows shot up to the top of her head. The next thing we knew, there was a letter that was issued by ODNR less than a month after our meeting, to all of the open-pit operators in Ohio, that said ‘clean it up or close it up.’” 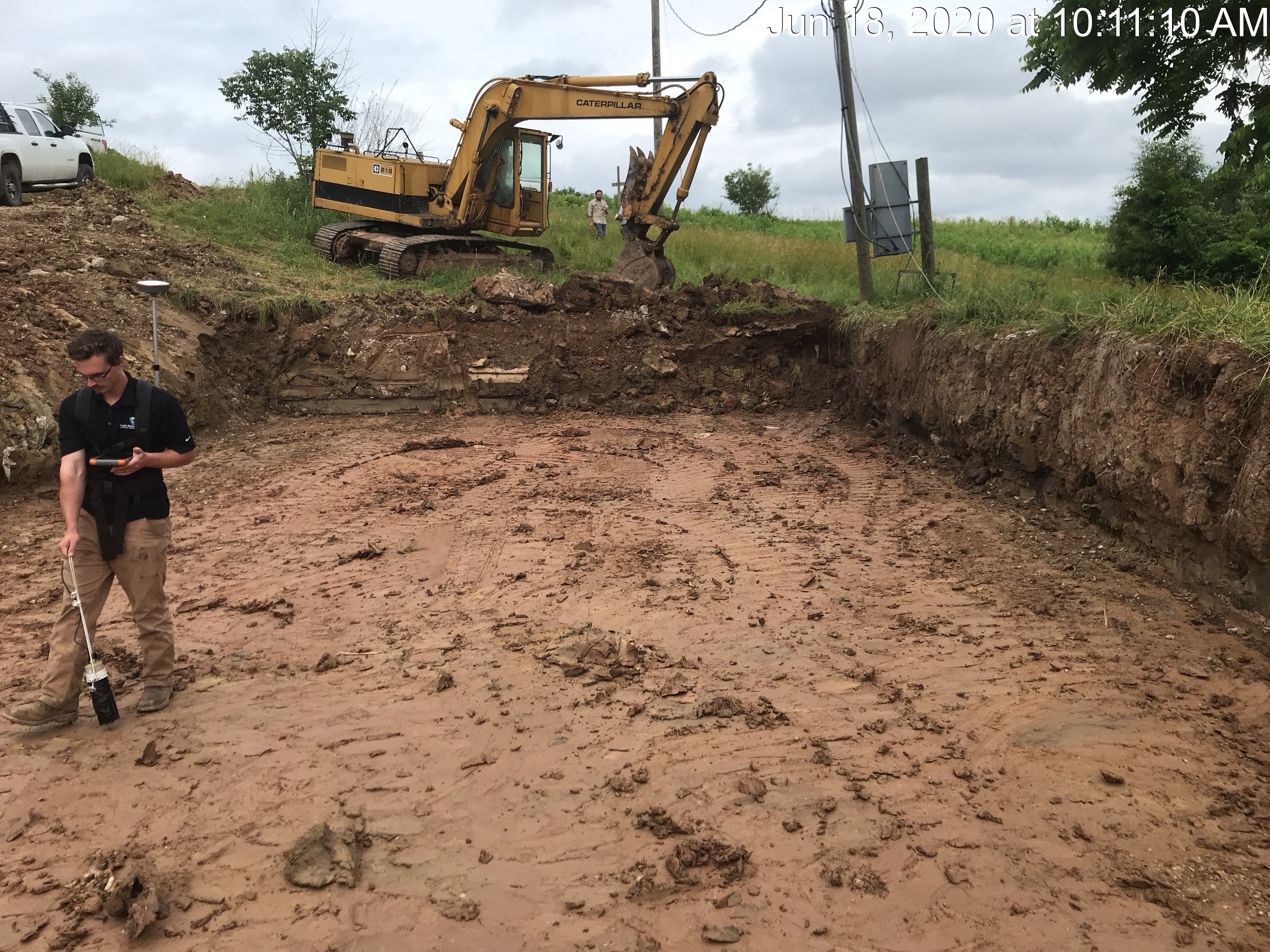 Austin Master Services, of Martins Ferry, Ohio, was hired by Carper Well Services, owner of the Ginsburg well, to oversee the cleanup of the open pit. In June 2020, an employee of Austin Masters Services tests for radiation in the ground beneath where the cement pit sat. Photo by Roxanne Groff

“That pit sat with all of the sediment from years of holding the waste that came to it,” Groff says, describing the accumulation of radioactive sludge in the pit. “Most of it was from conventional wells, which was our point all along, that radioactive material is not just in fracking wastewater. It’s in conventional brine.”

Mettler drove by the well during the cleanup. She describes seeing several laborers inside the pit, sweeping it with brooms. They wore no hazmat gear, only what she says looked like regular work gloves and rubber boots. There was no company name on the car and pickup truck parked at the site. Carper Well Services did not respond to requests for comment about worker safety during the Ginsburg site cleanup, and Austin Master Services declined to comment.

Groff told Athens County commissioners during a public meeting on Sept. 29 that ODNR has given Carper Well Services until June 2021 to remove the well head and attached piping.

To dispose of the waste, Austin Master Services, an ODNR-approved company that handles radioactive waste transport and storage hired by Carper, sent it to a specialized facility in Texas. The radiation levels were too high to be allowed in an Ohio landfill.

The closure and cleanup of the Ginsburg well, though a small victory in the context of the larger problem of unregulated toxic and radioactive waste from oil and gas drilling, is significant.

“It proves undeniably the toxicity and radioactivity of the waste,” Groff says. “We no longer have to prove that it’s in the brine. It’s leverage to hopefully educate lawmakers.”

“We’re taking this step by step,” she adds. “First we close the open-pit wells, the next step is proving that brine is harmful to people and the environment, then we can tackle the injection well rules and regulations. Probably not in my lifetime, but maybe someday somebody will show how the oil and gas industry has blindsided everybody.

“We are not finished with all of this but we have a small celebration on this chapter.”