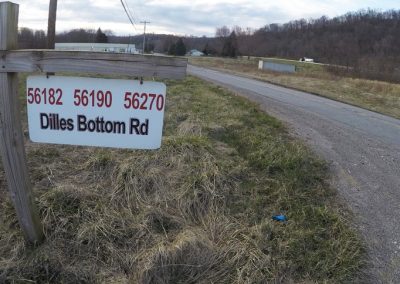 The site of the proposed cracker plant along the Ohio River in Belmont County, Ohio. So far, the site preparation process has filled in a pond and led to harmful dust clouds during windy conditions. Photo by Bev Reed

The economic prospects of a proposed Appalachian petrochemical complex, which would bring plastics manufacturing and petrochemical infrastructure to the region, appear increasingly unsure in the wake of the COVID-19 pandemic and a rapidly changing market.

For the past decade, lawmakers and corporate interests have spoken in favor of a potential petrochemical hub in the Ohio River Valley region of Appalachia. The proposed network of industrial facilities and pipelines would come several decades after a similar petrochemical complex developed along the Gulf Coast. This buildout would include a collection of industrial sites devoted to plastics manufacturing with ethane cracker plants. Cracker plants “crack” ethane, a hydrocarbon found in fracked gas, into ethylene, a product that can be used in plastics production. Other infrastructure would include underground storage units for natural gas liquids and petrochemicals.

As of July, one cracker plant is under construction in Beaver County, Pennsylvania, and a potential cracker plant in Belmont County, Ohio, is on hold after one of two investors backed out.

While environmental advocates have spoken out against the development of this complex for years, other stakeholders have recently expressed concerns that this project may be an unwise investment.

In a June letter, a group of economists, engineers, professors and public policy professionals urged the governors of Ohio, Pennsylvania and West Virginia to reconsider their support of petrochemical development. The tone of the letter is dire; the authors warn that states investing in this infrastructure “risk squandering hundreds of millions of dollars in public funds in pursuit of a vision that will not materialize.”

“In Ohio, Pennsylvania, and West Virginia, our goals for economic growth and job creation are being undermined by the mistaken belief that the region’s petrochemical and plastics manufacturing industries are poised to greatly expand and, in the process, generate large numbers of new jobs,” they wrote. “In fact, no such expansion and jobs boom is likely.”

The letter outlines a variety of risks to the economy, the environment and public health associated with this hub, including a warning about competition from better-established locations like the Gulf Coast. It also notes financial constraints in the ethane market, which have only worsened from the COVID-19 outbreak.

The cracker plant under construction in Beaver County, Pennsylvania, recently faced setbacks due to the pandemic. In March, Shell Pennsylvania Chemicals announced that it would suspend construction activity due to concerns about employees contracting the virus. The pause in activity was brief, though. The company reinstated approximately 300 employees each week from May to June, but COVID-19 concerns caused that to halt at the end of June, according to Trib Live. Twelve employees tested positive between late June and mid-July, and the company now has a testing lab on-site. A spokesperson stated that Shell plans to resume bringing in new workers at the rate of 300 per week beginning July 20.

Economists from the Institute for Energy Economics and Financial Analysis, an organization researching energy economics, issued a report in June 2020 calling into question the long-term viability of the Shell cracker plant in Pennsylvania. The report highlights the economic fallout that may result from the coronavirus. However, the IEEFA report is clear that the petrochemical market Shell is entering was shrinking even before the arrival of the virus.

The combined forces of an oversupply of plastics, plummeting oil prices that have driven up the price of ethane, and a gross domestic product severely affected by the pandemic all point to bleak prospects for the Pennsylvania cracker plant, according to the economics institute.

At the time of IEEFA’s report, Shell was withholding the full versions of two financial outlook reports from the public. The reports were produced by IHS Markit and Shale Crescent USA, and professors from Robert Morris University, respectively.

While Shell hopes for a return to full staffing, the Belmont County, Ohio, plant is on hold. In May, investors Daelim Chemical, based in South Korea, and PTT Global Chemical, from Thailand, announced that, because of COVID-19, they could not make a final investment decision until 2021. Then, on July 14, Daelim Chemical announced it was withdrawing from the project. In a joint statement, PTT Global Chemical affirmed its commitment to the cracker plant and said it is seeking a new investment partner. 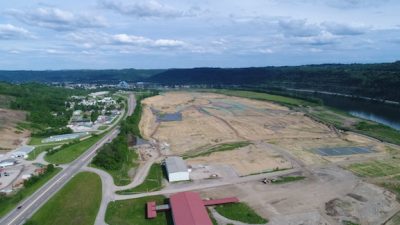 The potential cracker plant site in Belmont County, Ohio, is close to the Moundsville Riverfront Park, which is situated near the bridge in the background. Photo by Ohio Valley Environmental Coalition.

Bev Reed, an organizer with grassroots group Concerned Ohio River Residents and one of the owners of local Quick Service Bicycle Shop in Bridgeport, Ohio, says that the departure of Daelim Chemical is significant.


“There have been lots of reports out this year indicating that this project is not viable, not sustainable, not a reliable project,” says Reed. “So the withdrawal of this company just solidifies those arguments.”

According to Reed, locals are doubtful about the prospects of this cracker plant in their region. She cited a poll from The Intelligencer in Wheeling, West Virginia, which asked readers if they still thought a cracker plant might be built in Belmont County, Ohio, and showed 69 percent voting no.

A private group, Jobs Ohio, has already invested $70 million in the project. The project directors have approved continued demolition of homes located within the site, despite the changing timeline for the potential ethane cracker.

“[I]t’s kicking up a lot of dust,” Reed says of the ongoing demolition. “They were moving dust around on the site to ‘prepare it’ and every time the wind picks up, huge dust storms happen […] [T]hat dust is toxic because there used to be a coal-fired plant there on that site.”

This decision contrasts with the request made by the authors of the letter addressed to Gov. Justice and other state leaders. Their letter concludes by asking that these governors consider supporting renewable energy sources in the place of petrochemicals, citing “large-scale, high-visibility opportunities, like the Lordstown Motors electric truck plan in Ohio as well as new opportunities for existing businesses in communities all over our region in fields like lighting, HVAC, construction, building maintenance, and energy efficiency retrofits.”

Ashley Funk, the deputy director of the Mountain Watershed Association, which has worked with a number of petrochemical-related issues, states that Governor Wolf should instead be investing in “renewable energy industries […] but also basic state infrastructure and helping to fix schools who have asbestos all through them or whose water systems still have lead pipes that are being corroded and helping to redevelop road systems […] infrastructure that would really benefit people.”

“Instead, they chose to give a really huge subsidy to an industry that is only going to employ a handful of people at the end and cause much more impact on the health of residents who [will be] impacted by the entire life cycle of this industry, [from] gas extraction to the disposal of plastic whenever it’s thrown away in the landfill,” Funk concluded.