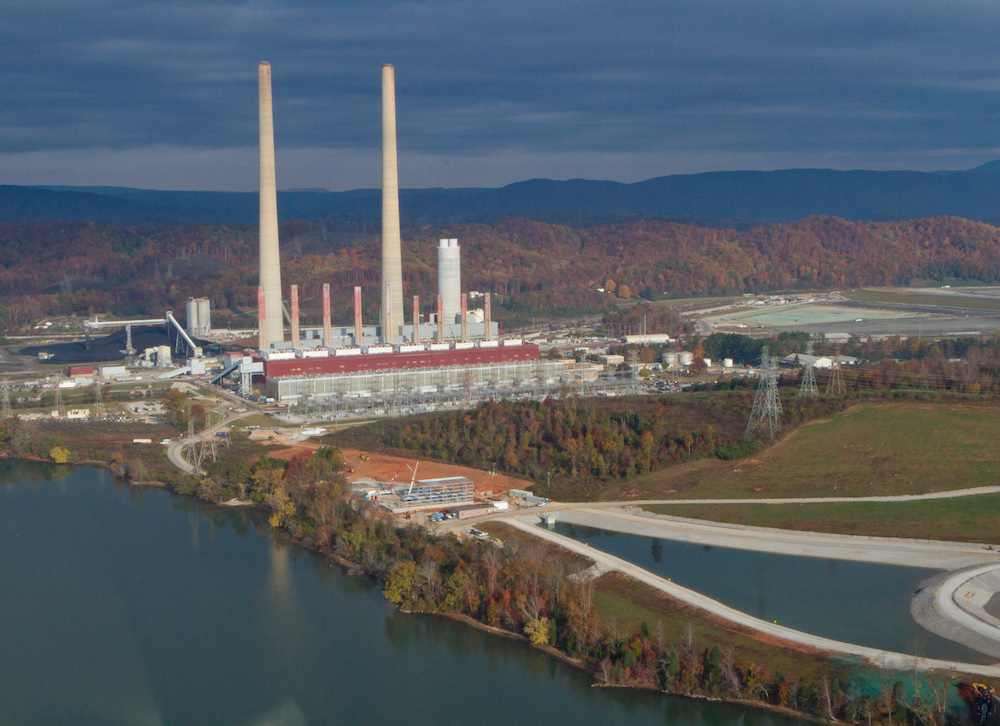 TVA is considering alternatives to replace the coal-fired Kingston Fossil Plant after 66 years of electricity generation. Advocates are calling on the utility to use solar and other renewables instead of fracked gas to fill the gap. Public domain photo

In the 1980s, the Tennessee Valley Authority generated nearly two-thirds of its power by burning coal. The federally owned utility now plans to shutter its last five coal plants by 2035 and reach net-zero carbon emissions by 2050.

But this goal is still 15 years past President Joe Biden’s target of 100% carbon pollution-free electricity by 2035. What’s more, TVA is considering replacing one polluting fossil fuel with another by building gas-fired plants to make up for the soon-to-be retired coal plants. Clean energy advocates are calling on the monopoly utility to commit to a more aggressive decarbonization timeline to fight climate change.

On June 15, TVA launched a public scoping process regarding the potential closure and replacement of nine coal-fired units at the Kingston Fossil Plant in East Tennessee. The utility accepted public comment on the environmental impact statement through July 15. TVA held a similar process in May for the proposed closure and replacement of two coal-fired units at the Cumberland Fossil Plant in Middle Tennessee, and accepted public comments through June 10. Retirement of the units could start as early as 2026.

TVA is considering three alternatives for the two coal plants, two of which would involve building gas-fired plants. The third option would be to construct solar and storage facilities. TVA also proposed keeping the coal-fired plants open indefinitely with regulatory upgrades as needed. Residents and environmental organizations including Appalachian Voices, which produces The Appalachian Voice, are calling on TVA to replace the polluting coal plants with renewables. 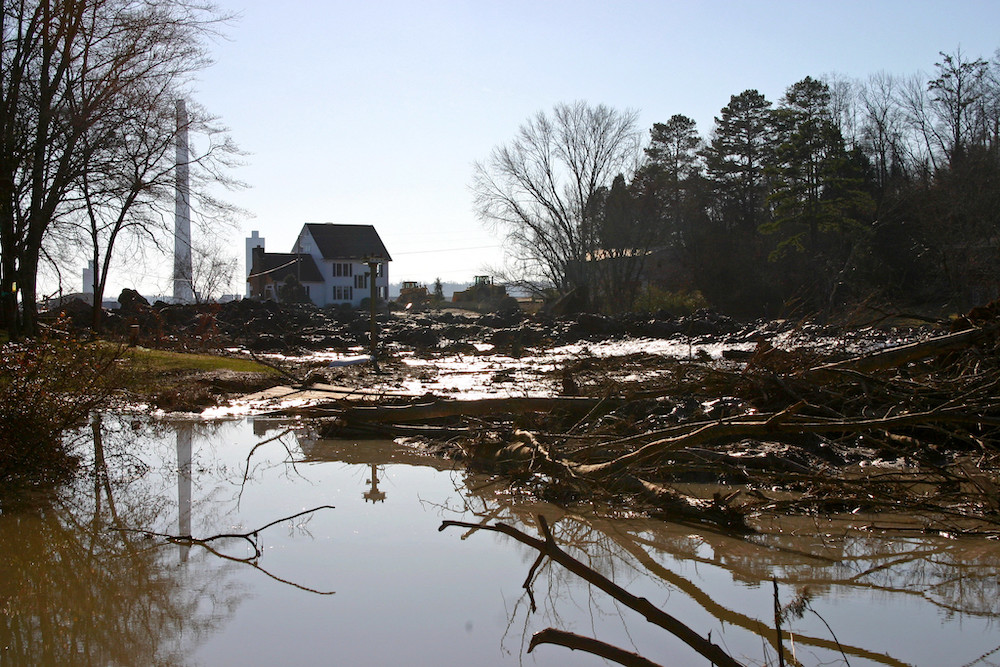 Three days before Christmas 2008, a dike ruptured at TVA’s Kingston Fossil Plant, releasing more than 1 billion gallons of toxic coal ash slurry into nearby rivers and land. Hundreds of workers who helped clean up the spill have developed sickness from being exposed to the coal ash, and more than 50 have died. Those affected are still fighting to get compensation from TVA for health expenses. Photo by Appalachian Voices staff

“As a former union carpenter who’s worked at many TVA coal plants, I understand and appreciate the role they’ve played,” Kingston resident Cleveland Carr said in a June 17 Sierra Club press release. “I think that TVA has a great opportunity with the closure of Kingston to be a leader in clean energy technologies, in re-establishing strong unions, and improving air and water quality for my children and future generations. I work at a company in Roane County with rooftop solar. I believe our county is ready to be part of building clean energy solutions while providing safe, good jobs to grow our economy.”

On April 20, President Biden nominated four new members to TVA’s board of directors, some of whom have backgrounds in renewable energy solutions, environmental justice and labor. But the U.S. Senate has yet to set a confirmation hearing for new nominees Beth Geer, Robert Klein, Kimberly Lewis and Michelle Moore. A Senate subcommittee is expected to hold a hearing on the nominees by September, after which the full Senate would hold a vote.

In May, a coalition of more than 200 energy justice, racial justice, faith and youth organizations including the Southern Alliance for Clean Energy called on the Senate to schedule a hearing to confirm the four new members.

“As the nation’s largest public power provider, TVA is the right utility to lead the nation in meeting the Biden administration’s goal to decarbonize our electricity sector,” said Southern Alliance for Clean Energy Director of Utility Reform Maggie Shober in a May press release. “In order to provide such leadership, it is critical that TVA’s board be made up of directors that understand the importance of a swift and just transition to clean energy and are able to push the utility’s leadership to lay out a plan to zero carbon by 2030.”

TVA hasn’t held a public listening session since before the pandemic, forcing community members to email their comments to the board if they want their voices to be heard. The Tennessee Valley Energy Democracy Movement, a coalition of organizations, community groups and citizens working to reform TVA, held a People’s Hearing on Aug. 4. The hearing gave people the opportunity to deliver public comments on TVA policies and discuss issues in breakout sessions. The coalition is also holding a demonstration during the next TVA board meeting on August 18. RSVP for the demonstration today!

The coalition of organizations lambasted TVA’s plans to decarbonize by 2050 as “woefully insufficient for addressing the climate emergency and growing energy insecurity.” And the utility might not achieve that timeline. At its current pace, TVA would not reach zero carbon emissions until after 2100, according to the Southern Alliance for Clean Energy.

To reach the Biden Administration’s goal of decarbonization by 2035, the Southern Alliance for Clean Energy is advocating for a federal clean electricity standard. In a June report analyzing the possible pathways to 100% clean energy in the Southeast, the group stated that clean or renewable energy standards are “already law in more than 30 states and territories, and have effectively driven low-cost power sector decarbonization while stimulating local economic development.”

The organization’s June report focuses on a pathway that would involve distributed energy resources such as rooftop solar and energy efficiency measures. At a larger scale, it would also include wind power, utility-scale solar and energy storage.

“TVA led the nation at its founding as an innovative clean-energy powered utility, and is well-positioned to do so again with a portfolio that already includes significant non-carbon resources, including hydroelectric capacity and a large hydro pumped storage facility, which are national assets,” said Shober in a March statement. “TVA has already moved in the right direction but has yet to commit to the goal of a carbon-free power system. Utilities, including TVA, are not going to do this without an external push from a policy like the clean energy standard. The electric sector is not going to become carbon-free through market forces alone.”

In early 2021, the Tennessee Valley Energy Democracy Movement — a coalition of organizations, community groups and citizens working to reform TVA — sent a memo to the White House highlighting several actions President Joe Biden should take to accelerate Covid relief and economic growth in the region. The group stated that former President Donald Trump’s August 2020 executive order to prevent TVA from outsourcing more than 200 jobs and removal of two TVA board members serves as precedent for these recommendations. The recommendations for Biden include:

1. Instructing the TVA board to halt utility shut-offs for the duration of the pandemic, track utility bill arrears at local power companies and mandate a 12-month electric bill repayment plan.

2. Ordering the TVA board to make energy efficiency a priority by expanding programs and incentives for residential and commercial ratepayers.

3. Directing the TVA board to end outsourcing and to stop relying on contractors instead of full-time employees, in addition to strengthening safety protocols for coal ash cleanup workers.