On July 16, the Federal Energy Regulatory Commission rightly rejected the sweeping attack on rooftop solar net metering policies detailed in this blog. The New England Ratepayers Association’s petition would have increased utility bills for more than 2 million solar net metering customers across the country, including more than 40,000 customers in the Southeast — 90,000 if you include Florida.

FERC’s unanimous decision to dismiss this petition is welcome news and a huge win for rooftop solar across the country and the Southeast. Of all the renewable energy sources available today, rooftop solar combines the greatest raw potential with the smallest environmental footprint, making it something utilities should support and encourage — not disincentivize.

The Southern Environmental Law Center filed extensive comments on behalf of Appalachian Voices and other Southeast public interest organizations, joining a chorus of over 50,000 individuals and 600 organizations, states, regulators, and elected officials opposing NERA’s attack on net metering that has now been dismissed by the commission.

Thank you to the many renewable energy proponents who contacted your governors about this important issue, and to the Appalachian Voices members who allowed us and SELC to represent you in our formal comments. 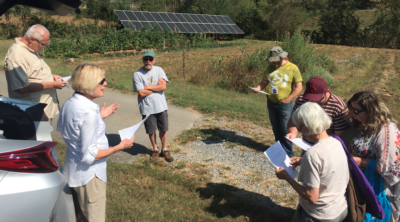 Laurel Flaccavento discusses her family’s solar installation with visitors during the National Solar Tour in 2019.

Do you have a solar or wind energy system at your home or business? If so, are you aware that your rights to generate – and be compensated for – your own electricity production are under threat?

Residential solar arrays and wind turbines contribute clean, cost-effective energy to their local energy systems. The installation and maintenance of solar and wind provide short- and long- term jobs, and provide a secure source of power for homeowners and business owners who see their electric bills go down over time.

Many homeowners and organizations have found that installing solar or wind energy is a worthy investment for environmental and economic reasons, in large part due to state and federal programs that facilitate such investments through financing mechanisms and net-metering policies. The locally generated energy that results from distributed wind and solar sources reduces the demand placed on a utility’s grid. For this reason, many utilities establish net-metering contracts with solar and wind owners that compensate these customers for the power they provide to the grid. 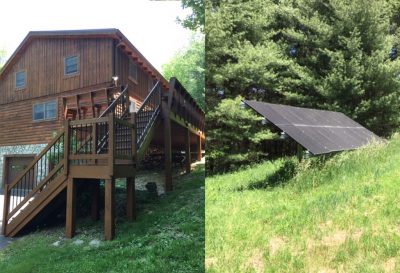 Dick and Anita Greenwood, both members of Blue Ridge Electric in North Carolina, say their solar system has saved them hundreds of dollars in monthly energy bills. During warm months, the couple says that, on a daily basis, they get about 16 kilowatt-hours from their solar system and only need about 4 kwh — or one-fourth of their total daily usage — to be delivered by their utility. During the winter, their system reliably supplies about one-seventh of their daily usage. “We love our solar system,” Dick says.

Net metering makes investments in solar or wind systems possible for more people, as credits offered by the utility for their excess power help them pay for their solar panels or wind turbines over time. Often, that compensation from the utility occurs at the retail rate of power.

But an insidious petition to the Federal Energy Regulatory Commission (FERC) seeks to strip net-metering contracts of many of the benefits that have made such systems accessible for homeowners and business owners across the U.S., including in the Appalachian region. Among other things, this petition would reduce the compensation from the retail rate to the avoided cost rate, meaning that the payback period for your investment would take significantly longer. And that would likely prohibit most potential solar and wind customers from installing their own systems.

“Even if you have to finance it, it’ll be the best decision you’ve ever made,” says Southwest Virginia homeowner Laurel Flaccavento, whose utility, Appalachian Power Company, credits her at the retail rate. The ground-mounted solar array at her home has reduced her monthly energy bills to roughly $9 for nine months of the year.

The petition to FERC comes from the New England Ratepayers Association (NERA), an organization that has failed to disclose its membership, though they appear to have shadowy ties to private, politically motivated donors. The implications of this petition would be devastating for homeowners, businesses, nonprofits and governments with net-metering contracts.

This petition is a blatant attack on states’ authority to control how and where energy is produced in their jurisdictions, and on people’s freedom to power their homes and buildings with clean energy. It threatens our ability to participate in Energy Democracy, a framework which operates under the principle that consumers of electricity should have a say in where and how their power is produced. In addition, it would halt net metering as we know it, significantly slowing our transition to a carbon-free energy system — a transition we simply can’t afford to delay.

“We have had a 10-kilowatt net-metered system installed and operational at our farm since late 2010,” says George Neall of Rockingham County. “Should FERC end the policy where net-metered solar systems are given fair credit for the excess energy they produce, we would likely have to install storage batteries and disconnect from the electrical grid, even though that would entail a considerable investment in rechargeable batteries.”

Appalachian Voices is collaborating with other pro-environment and pro-consumer groups to fight this petition. We are filing comments directly with FERC, as well as urging governors and attorneys general throughout the Appalachian region to intervene in the FERC case to protect your right to produce power.

“We have had a 10 KW net-metered PV system installed and operational at our farm since late 2010. Should FERC end the policy where net-metered PV systems are given fair credit for the excess energy they produce, we would likely install storage batteries and disconnect from the electrical grid, even though that would entail a considerable investment in rechargeable batteries.” – George Neall (VA)