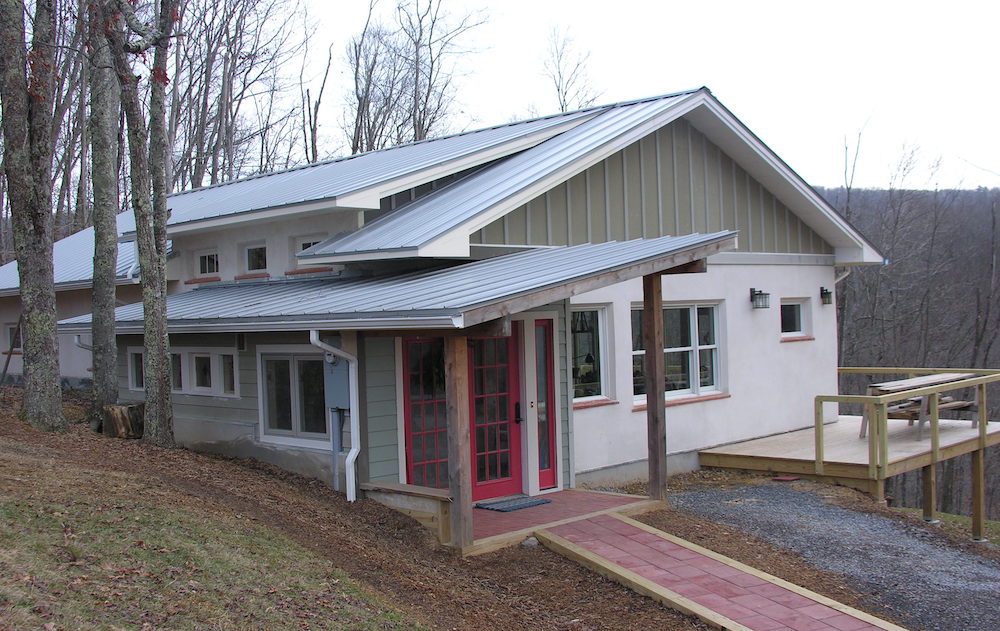 Hempcrete is used for construction and for insulation. Bob and Ginger Must’s home in West Virginia was built with hempcrete. Photo by Michael M. Barrick

One of America’s greatest writers, Pearl S. Buck, was born here in Hillsboro, W.Va., in 1892. Though she grew up in China as the daughter of missionaries, her novel, “The Good Earth,” which gained her worldwide fame in the 1930s, seemed to spring out of the very mountains in which she was born.

It seems appropriate then that one of the first houses in West Virginia constructed with hempcrete was built here by Seven Rivers Design+Build, a local company owned by Andrew Must. Hempcrete comes from the hemp plant, which has been used for thousands of years by humans for numerous purposes and is one of the world’s oldest domesticated plants.

His parents, Bob and Ginger Must, agreed to be “guinea pigs,” as Ginger put it, for Andrew’s first attempt at a hempcrete house. Ginger designed it.

“We were going to downsize anyway,” she says. “Andrew had been talking about hempcrete. We thought it would be a model. We want to promote West Virginia hemp.”

While Andrew is looking forward to the day he can use hemp grown in West Virginia, he shares, “The hemp was grown and processed in Kentucky, and we hauled it to West Virginia. So it is sourced regionally.” 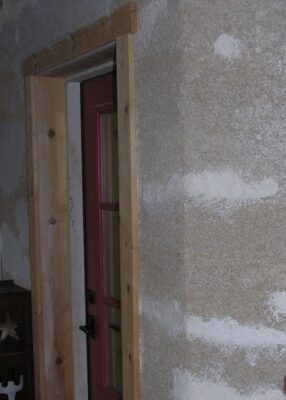 A hempcrete wall prior to plaster application

According to Andrew, hempcrete is essentially bonded cellulose insulation. It is a composite of bio-ﬁber and a mineral binder with three main ingredients: hemp hurd, lime binder and water. The lime undergoes a chemical set when moistened, binding the hurd particles together.

I visited the three of them at the home in late January, less than three months after the couple had moved into it. Bob is a retired physician; he practiced in Hillsboro. Ginger worked in Hillsboro for the Pocahontas County library system before retiring. They have owned the land in one of the state’s most scenic counties for 13 years. The 1,750 square-foot house took two-and-a-half years to build.

While the project was frustrating at times because it was a new experience, in hindsight, sitting in their bright and spacious great room, it was clear the Musts were pleased with the risk they took. When I visited, it was about 28 degrees outside. Snow-capped ridges could be seen out the window. The thermostat inside was set at 66. The actual temperature in the house on a cloudy day was 70. Energy efficiency is just one benefit of hempcrete.

The material is used mainly as wall, slab and roof insulation. The air space between the hemp hurd particles creates its insulative properties up to R2.5 per inch. While that is lower than traditional fiberglass insulation, the properties of the hemp make it easier for the contractor to manipulate.

Andrew adds, “The ecological footprint of hempcrete is so much smaller. It’s carbon-negative, and unlike other building products used to build walls, hemp is not nearly as temperature sensitive.” Hence, less insulative properties are required.

Notably, the walls are plaster, not drywall. Drywall is just one of the many typical products that go into modern homes that need not be used in a hempcrete house. Additionally, the use of plaster as opposed to sheetrock improves hempcrete’s insulative properties. “I did a lot of research on plaster,” Ginger says. “It’s impervious to insects. It won’t get mold. There is no moisture in the walls.”

All three added that one of the biggest challenges — because of the way hempcrete sets up — is making sure the contractor and home owners figure out where electrical outlets will be, where cabinets will be hung, where ductwork or other HVAC systems will be located, and all of the other logistical considerations that go with piecing together a home.

Andrew’s parents chose to place the heating system in the floor. They also have a small wood stove and a wall of windows facing south. They do not have air conditioning. For the summer, a natural cooling system of trees on the north, west and east keeps them comfortable.

“So far, we’re very happy, “ Bob shares. “Hemp is very breathable, so you have fresh air.”

As with any construction project, the sequence of events needs to be precise. That is especially more so with a hempcrete house. As with any home, grading and footers are completed first. They then build the walls. An advantage here, notes Andrew, is that he needs only use 2x4s instead of deeper studs. Larger studs, such as a 2×6, are used in standard building just to allow room for insulation; that isn’t necessary with hempcrete.

Next, the placement of hempcrete begins. A form is built for the hempcrete. The hempcrete is then placed between the studs about two feet up. The process is labor intensive, as the hempcrete is packed tighter close to the studs. Keeping that balance uniform as one goes up the walls is difficult, so the Musts learned a few things during the process. From there, the interior walls are framed, the windows are set and the house is plastered.

While the house was built out of practicality — and a sense of adventure to experiment — Ginger says, “It has an old world quality in the way it looks and feels. It feels good. The right light and humidity. It’s like going to chapel.”

So, while hemp farmers and others in the supply chain struggle to find markets for their hemp products in these early stages of the industry, it would seem that hemp has found a home — in homes.

To learn more about why and how hempcrete is used in building, contact Andrew at (304) 520-5076 or by email at andrew@sevenriversdesignbuild.com.