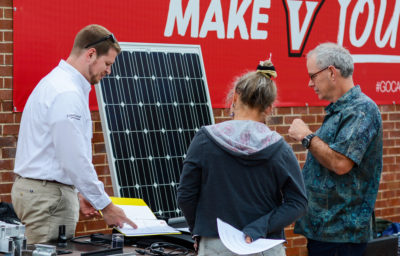 Coal tipples and strip mines have long been familiar sights to residents in Southwest Virginia. But, as new forms of energy and an economic transition continue to reshape the region, solar installations are becoming increasingly visible in our region. If you’ve ever thought about installing solar on your home or business, now is the perfect opportunity to see a solar installation up close and personal and get involved with the Solar Workgroup of Southwest Virginia, because October is Solar Month in SWVA!!

Next month, residents in Southwest Virginia will have the chance to tour some of the region’s solar energy installations on two separate tours taking place on October 5 and 19. The Solar Workgroup of Southwest Virginia, the American Solar Energy Society, and Solar United Neighbors are teaming up to showcase solar energy systems across the region as part of the 24th Annual National Solar Tour. The solar tour will offer participants the chance to learn about the opportunities for savings, financing opportunities, the nuts and bolts of how a solar installation works, and can receive a free home solar assessment.

On Saturday, October 5, a tour of solar installations in Abingdon will take place beginning at noon at the Community Center of Abingdon (300 Senior Drive, Abingdon, Virginia 24210). Included in the tour are residential systems as well as installations at People Inc.’s low-income housing developments. People Inc. is helping to pave the way for solar energy in our region, as both a co-convener of the Solar Workgroup of Southwest Virginia and an early adopter of solar in Southwest Virginia.

On Saturday, October 19, the Wise County tour will begin at noon at Mountain Empire Community College during the annual Home Craft Days festival. This regional arts and music festival in Big Stone Gap is completely powered by the college’s portable solar system. Participants will then have the chance to visit local residents in Wise County who have installed solar panels on their properties. 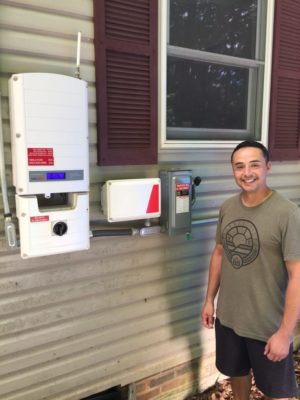 One such resident is Lorenzo, from Big Stone Gap, Virginia. During the 2016-2017 Solarize Wise program, Lorenzo and his family got their own solar system installed on the family’s home to begin saving money on his utility bills and help introduce solar energy to the area. In the summer of 2018, Lorenzo experienced his first months of free electricity. With a few simple home efficiency upgrades provided through his solar installer, Lorenzo’s family is now experiencing reduced electricity costs and will continue to save on electricity for years to come.

In addition to the solar tours, the Solar Workgroup is hosting a film viewing and discussion on Monday October 7 at the newly-opened Oxbow Center in St. Paul. We’ll start the evening off with dinner and discussions with local leaders about solar efforts in Southwest Virginia. Then we’ll watch the film “Catching the Sun,” a documentary that explores the growing solar-energy industry by profiling U.S. and Chinese workers and business leaders who are racing to make crucial breakthroughs in the field. The film inspires viewers to think big about the opportunities solar energy presents us all. 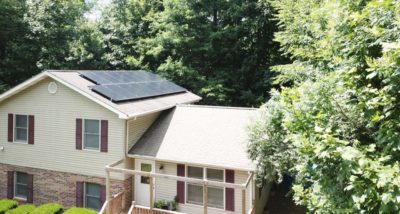 Lorenzo’s solar panels on his home in Big Stone Gap.

Come out and launch your fall with some solar, y’all!
About