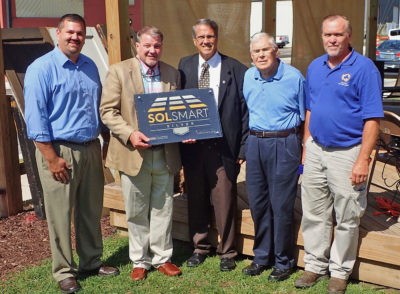 It’s been a big week for solar energy in the coalfields of Southwest Virginia, with a celebration of eight local communities advancing solar as well as the announcement of a substantial grant to build an industrial-scale solar project on a former mine site.

This past Thursday, eight Southwest Virginia communities were honored at a ceremony in St. Paul for achieving national SolSmart designation for encouraging the growth of local solar energy markets.

Wise County achieved SolSmart Silver designation, and Dickenson County, Lee County, City of Norton, Russell County, Scott County, Town of St. Paul, and Tazewell County all achieved Bronze designation. These are the first communities in central Appalachian to have applied for and received the SolSmart designation.

Each of the communities was awarded their SolSmart designation for efforts taken to reduce the time and expense required to install solar energy systems. These actions will have far reaching impacts, as solar energy allows residents and businesses to lower their electricity bills using a renewable power source, while at the same time driving new economic development and creating local jobs.
“Many manufacturing companies are looking for communities and counties who are forward thinking, and having this designation just solidifies our commitment to our future,” said Lou Wallace, member of the Russell County Board of Supervisors.

Local communities hope to leverage their SolSmart designation to attract new businesses of all types.

The Wise County Industrial Development Authority is tapped to receive a $500,000 Abandoned Mine Land Pilot grant for a 3.46-megawatt solar installation to power the Mineral Gap Data Center and for work to remediate old coal mine features near the site. The solar project will be installed by Virginia-based Sun Tribe Solar.

Congressman Morgan Griffith and the Virginia Department of Mines, Minerals and Energy will present the grant to Wise County officials and their project partners in a ceremony at the Mineral Gap Data Center in the Lonesome Pine Regional Business and Technology Park on July 31st, at 10:00 a.m.

Developers for the Wise County solar project estimate that the annual land lease — as well as site operations and maintenance — will infuse more than $1 million into the Wise County Industrial Development Authority and support local contractors over the solar project’s 35-year life span.

The project is a strong example of an innovative, community-driven reclamation project and was supported by the regional Reclaiming Appalachia Coalition. RAC facilitates efforts to ensure that AML Pilot grants and other coal-impacted land reclamation funds are used responsibly for projects that truly help lift up struggling communities while healing the land. 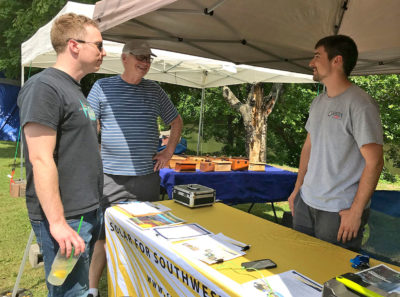 Charging Ahead Together on Solar

Solar projects of all sizes, including large-scale projects like the Wise County project, will now be easier and cheaper thanks to the local communities’ efforts under the SolSmart program. And the new Mineral Gap Solar project provides a pilot

Both of these achievements were supported by the Solar Workgroup of Southwest Virginia, and demonstrate that real progress can be made when different stakeholders collaborate to make change together. The Solar Workgroup of Southwest Virginia has been assembling nonprofit and community organizations, colleges, state agencies, planning district commissions, citizens and businesses seeking to develop a robust renewable energy industry in the region since 2016.

“We know that solar can succeed when projects are built in partnership with local stakeholders in both the public and private sectors,” said Taylor Brown, Chief Technical Officer of Sun Tribe Solar.

There is more collaboration on solar in Southwest Virginia on the horizon. In June, GO Virginia announced that the Solar Workgroup will receive more than $70,900 to develop a “playbook” for solar energy jobs, manufacturing and utility-scale investment in the region. The Solar Playbook will identify specific ways the region can grow a strong, locally-rooted solar industry and provide a guide for community leaders to turn these opportunities into local jobs while attracting outside investments. So there’s more good solar news from Southwest Virginia coming to a newsstand near you!

The Solar Workgroup of Southwest Virginia is co-convened by the UVA-Wise Office of Economic Development & Engagement, People Inc., and Appalachian Voices, with facilitation assistance from Dialogue + Design Associates.