“Poor people’s lives are disrupted and dislocated every day. We want to put a stop to this. Poverty, racism and discrimination cause families to be kept apart, men to become desperate, women to live in fear, and children to starve.” 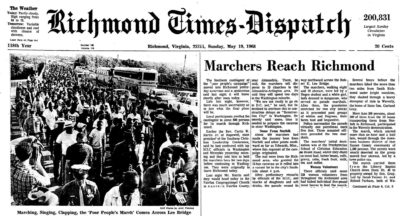 These words of Martin Luther King, Jr. appeared on a grassroots brochure from 1968 announcing plans for the Poor People’s Campaign March on Washington D.C. that spring to issue an urgent call for economic justice.

It was a historic event, and marked an important convergence of voices from a variety of interests in this singular demand. On May 18, 1968, the marchers crossed the Robert E. Lee Bridge over the James River in Richmond on their way to D.C.

Fast forward 51 years, to May 17, 2019, when hundreds of people — black, white, young, old, gay, straight, rich and poor — took the same route across the bridge into Richmond to demand environmental justice for all Virginians and to demand action from state leaders to stop fracked-gas pipelines in the commonwealth. 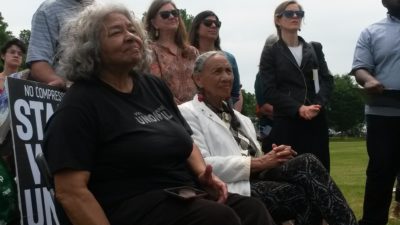 It was the first day of a two-day event called “Virginians For Justice: Progress Not Pipelines!” which Appalachian Voices was honored to help plan, along with many other organizations (listed at the end of this post). The joint events were designed to unite Virginians from all across the state in common cause to oppose unjust and unneeded fracked-gas pipelines anywhere in the commonwealth, and to stand in solidarity for environmental justice and the climate.

Powerful op-ed by Del. Sam Rasoul on how, and why, the state should stop both the Mountain Valley and Atlantic Coast pipelines

The day in Richmond saw upwards of 300 people march and rally in solidarity with the black community in Buckingham County targeted for a massive industrial compressor for the fracked-gas Atlantic Coast Pipeline being proposed by Dominion Energy. John Laury, a descendant of slaves and the freedmen who established Union Hill, spoke of the impact the compressor would have on his farm, his community and his cherished sense of place and heritage. Beth Roach, a tribal council member of the Nottoway Tribe of Virginia, spoke of the sacredness of all lands in Virginia, and beyond, to Native Americans.

Gore, quoting from King’s sermons and reading the written history of blacks of Buckingham County by local resident Charles White, delivered an impassioned, moral case for stopping the pipeline and the injustices it would render in the Union Hill community. Barber III called on leaders in Virginia and at the national level to take immediate action on climate, including halting expansion of all fracked gas infrastructure.

Members of several faith communities — Protestant, Buddhist, Baptist, Jewish — also addressed the crowd and marched arm-in-arm across the Lee bridge, while musicians from the SUN SING collective drummed out the pace and later performed at Oregon Hill Overlook.

In a show of solidarity, some of the same folks joined new people on Saturday in Leesburg, the hometown of Attorney General Mark Herring, where they called on the state’s top law enforcer to call an immediate halt to work on the Mountain Valley Pipeline. The citizens also called on Herring to pursue his lawsuit against the pipeline for some 300 water quality violations, and to stand up for the state’s authority to revoke the project’s water quality permit. 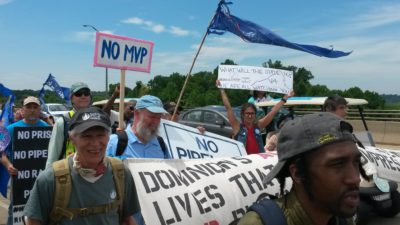 Karenna Gore was once again with the group, and was joined by other speakers including Rev. Lennox Yearwood, president of the Hip Hop Caucus, Virginia Delegates Chris Hurst, Elizabeth Guzman and Sam Rasoul, and professor Emily Hammond, George Washington University Law School.