Compiled with help from AV staff 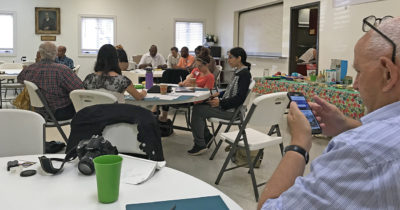 Residents and consumer advocates from across North Carolina have banded together to oppose a state legislature bill backed by Duke Energy that would allow the monopoly to more easily raise rates AND foist their cost for doing business onto N.C. ratepayers.

Senate Bill 559, benignly known as the “Storm Securitization/Alt. Rates” act (the full title is a stunning 33 words long), would circumvent regulatory review and allow electric monopolies like Duke Energy to get a single approval for up to five years of automatic rate hikes for investments like its flawed $13 billion grid “improvement” scheme. It could also put ratepayers on the hook for coal ash cleanup costs and new pipeline construction, all with little to no transparency or accountability.

Almost as bad as the intention of the bill is how it was supposedly written in secret by Duke Energy without any stakeholder process. As the Fayetteville Observer wrote in a searing editorial, “Letting the utility write the law is worse than letting the fox guard the hen house – it’s letting the fox design it too.”

Not only has the bill seen opposition from regular ratepayers, some of the state’s largest companies and consumer rights organizations — including Walmart, Google, AARP, Dow Chemical, Dupont and medical giant GlaxoSmithKline — have been outspoken against the bill, with 58 companies teaming up to deliver a compelling letter to key members of the Senate’s Rules and Operations committee.

According to Appalachian Voices’ Senior Energy Analyst Rory McIlmoil, the bill could also allow Duke to make more profit than currently authorized and pass it along to shareholders rather than refunding ratepayers. If the bill becomes law, utilities could gain advance approval for future investments and rate hikes even if time and technology render them unnecessary. Soon after the bill was introduced in the N.C. Senate, Rory authored a special report looking at Duke Energy’s efforts to curry political favor with North Carolina lawmakers — including 11 senators key to either proposing or reviewing the bill. The report, “Monopoly Money: How Duke Energy Uses Campaign Contributions to Rewrite the Rules and Increase Profits,” not only exposes the “toxic eleven,” it shows the amounts of Duke Energy-related campaign contributions that were donated to all 170 members of the N.C. Assembly.

As Rory so clearly summarizes, “The evidence shows that Duke is targeting its campaign contributions in order to game the system by bribing the referees.”

The Energy Justice North Carolina Coalition, co-convened by Appalachian Voices and 13 other statewide groups earlier this year, has lead the fight against this bad legislation by organizing meetings, talking with legislators, and posting a powerful full-page ad in the Raleigh News & Observer calling out Sen. Dan Blue for his support of the bill in light of the fact that he was among the top recipients of campaign contributions from Duke Energy in 2018.

After a few back-and-forths in committees, S.B. 559 passed the senate on May 6 and was introduced into the House, where it has lingered since. Capitalizing on continued resident outrage in the state, the Energy Justice NC Coalition recently sponsored a lobby day, bringing more than 40 individuals — many who had never lobbied before — to the state capitol. The group attended more than 100 meetings with legislators and aides, including hand-delivered letters from nearly 60 additional North Carolina citizens to their representatives.

Two groups of high school students attended lobby day, one from the Goldsboro area and one from the Triangle. Both groups were able to meet with their representatives in person, and the students left extremely excited about not only seeing first hand how the legislative process works, but also being able to participate in it.

As the bill progresses through the N.C. House, Appalachian Voices and the Energy Justice NC Coalition will continue to speak out about the bill. Here are some ways you can be involved: