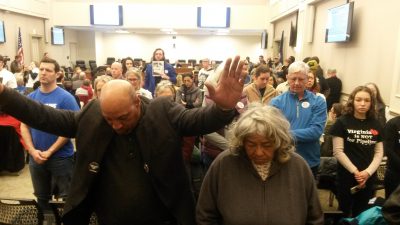 The Virginia Air Pollution Control Board today delayed a highly anticipated vote on the controversial proposed compressor station in the largely black community of Union Hill in Buckingham County. In a packed meeting room of mostly opponents of the proposed Atlantic Coast Pipeline, the board adopted several technical amendments to the draft permit. The board also voted to open a new public comment period for the public to respond to new information submitted to the board by the Department of Environmental Quality over the past month.

The DEQ presented new demographic information today, attempting to call into question Union Hill’s status as an environmental justice community. However, community residents say the agency based its findings on flawed methodology. Anthropologist Lakshmi Fjord had previously provided an analysis to the DEQ and the board about the demographics of the community using the Environmental Protection Agency’s preferred research methods.

The public is awaiting further information about the start of the public comment period and how long it will last. Governor Northam’s two new appointees to the board, Gail Bush and Kajal Kapur, did not attend the meeting, and the seventh member of the air board, Roy Hoagland, stated long ago that he would abstain from voting on the project, citing a conflict of interest.

“According to EPA, highly localized survey data provide the best environmental justice analysis. Ms. Fjord used these research methods, and the results are clear. Any attempts to undermine the fact that Union Hill is an environmental justice community — and that the compressor station would have a disproportionate and harmful impact on its citizens — should be disregarded by the board.