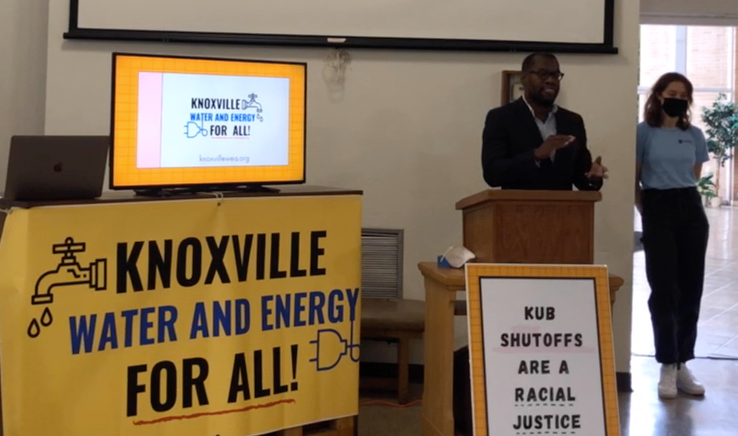 “As good neighbors, we can no longer ignore the data that reveals the widening gap in utility shut offs impacting Black households,” said Rev. Calvin Skinner of Mt. Zion Baptist Church in Knoxville, Tenn., during a press conference announcing the Knoxville Clean Water and Energy for All Campaign. Image courtesy of KWEA

A community coalition in Knoxville, Tennessee launched a campaign on June 24 urging the Knoxville Utilities Board to offer a utility bill affordability program for low-income customers and to end utility disconnections for those with high bills. Data provided by the utility showed that Black and Brown communities in the city face higher disconnection rates and spend a higher percentage of their income on utility bills.

Rev. Calvin Skinner of Mt. Zion Baptist Church, a faith leader and advocate with the campaign, states that energy insecurity — the struggle for people to maintain necessary energy services in their home — is often a life-or-death situation.

“Many people are having to choose between paying their utilities or paying for medicine,” says Skinner. “There are members within our community who depend on utilities for essential medical equipment and they are on the cusp of a shut off.”

Between October 2020 and February 2021, KUB disconnected more than 3,000 Knoxville homes from energy and water after the utility ended their shutoff moratorium in mid-October, according to data provided by the utility to independent researchers commissioned by the campaign. Researchers also found that non-White populations in Knoxville were 170% more likely to be disconnected from power and water than White communities with above-average poverty.

“Too many families, especially in Black and Brown communities, get disconnected from KUB utilities because they don’t have enough income to pay their bill,” said Appalachian Voices Tennessee Campaign Manager Bri Knisley in a statement. “Punishing households that can’t afford bills by disconnecting them is unjust, and it’s a problem that groups are mobilizing around across the country. Energy and water access is a human right, and we need a solution to unaffordable bills and disconnections at KUB.”

According to researchers, 23% of Knoxville households are “utility burdened” — meaning they spend more than 10% of their income on utility bills. They found that 40% of Black households served by KUB were utility burdened, compared to 21% of White households. This racial disparity also appears in data showing that communities of color served by KUB owed two-times more in past due accounts than White communities.

The Knoxville Water and Energy for All Campaign is calling on KUB to adopt an income-based utility bill payment program called a Percentage of Income Payment Plan. This program, which has been adopted by other states including Ohio, would reduce utility bills to 10% or less of a household’s income.

“We cannot afford to be asleep with the alarms sounding that we are in a state of emergency,” said Skinner in a statement. “This emergency is fueled by economic and racial inequities that our local government is ignoring.”

Skinner emphasizes that energy insecurity was a problem before the Covid-19 pandemic.

“People have been threatened with shutoffs, with eviction, even before the pandemic,” says Skinner. “If we were diligent and intentional about eradicating and alleviating the issues around energy insecurity before, we would not be so behind now.

“And so with this pandemic, where the numbers have really expanded, in many ways, out of control, we still have an opportunity to alleviate these issues,” he continues. “But if we don’t recognize the fact that they’re in this fundamental system that needs to be fixed and addressed, we’re going to be back at this over and over again.”