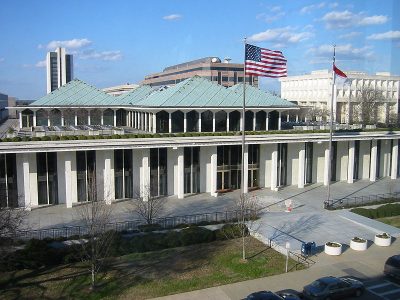 On June 15, North Carolina House Republicans unveiled proposed changes to energy legislation after months of closed-door negotiations with Duke Energy and other stakeholders. But clean energy advocates including Appalachian Voices, the nonprofit organization that produces The Appalachian Voice, say that the proposed version of House Bill 951 places too much power in Duke’s hands while authorizing an unnecessary buildout of natural gas infrastructure.

In contrast to Gov. Roy Cooper’s target of 70% carbon emissions reduction for utilities in the state by 2030, the proposed version of H 951 would only cut emissions by 61%.

The proposed new version of H 951 calls for the closure of generators at five coal-fired power plants by 2030 — but approximately 70% of those units would be replaced with gas-fired generators, locking North Carolina ratepayers into decades of fossil fuel emissions. The bill also requires 777 megawatts of renewable energy per year through 2026, of which Duke would own 55%.

Additionally, the proposed H 951 would weaken the authority of the N.C. Utilities Commission by allowing multi-year rate increases over a three-year period. Duke attempted to pass similar legislation in 2019, but the House voted it down. Opponents of the bill state that there were no low-income or residential ratepayer advocates in the room while it was drafted — leading to it disproportionately impacting those who can least afford it. The bill would also allow Duke to reclaim $50 million from ratepayers if the utility pursues a new nuclear permit.

The nonprofit N.C. Sustainable Energy Association, one of the stakeholders included in the bill-writing process, released a statement opposing the bill on June 16.